Dubawi to cover the dam of 2,000 Guineas hero Galileo Gold 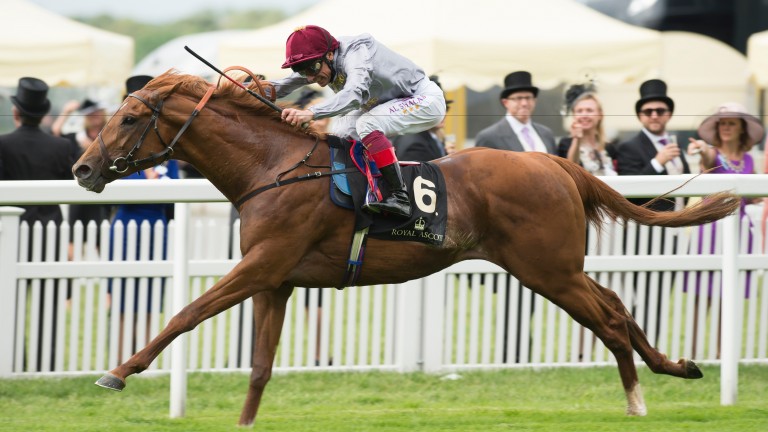 Trained by Hugo Palmer, Galileo Gold showed plenty of promise as a two-year-old winning the Group 2 Vintage stakes at Goodwood, before finishing third to Ultra in the Prix Jean-Luc Lagardere in France.

On his first start at three, he won the Newmarket contest from Massaat and Ribchester, and finished second to Awtaad in the Irish 2,000 Guineas at the Curragh three weeks later.

He then developed a rivalry with The Gurkha, beating him in the St James's Palace Stakes at Royal Ascot, before that same rival touched him off by a neck in the Sussex Stakes at Goodwood.

Galileo Gold is the first of four foals by Galicuix. The daughter of Galileo was picked up for 8,000gns at the Tattersalls December Mares Sale in 2013, and gave birth to a second foal, a filly called Choumicha, the following February. Choumicha is also in training with Palmer and won a maiden on her second start at Leicester in October.

She also has a two-year-old and yearling by Champs Elysees.

Bo Hicks-Little, stud manager at Pantile Stud in Cambridgeshire, said: "The owner was keen to send the mare to Dubawi. Oasis Dream was a step-up on her earlier covers, and this represents another step-up again. She seems to warrant a good cover."

"She hasn't foaled yet - she is due to foal in April to Oasis Dream."

Colin Murfitt, owner of the mare, said: "Dubawi is the best stallion she can possibly go to. She's a good mare and hopefully she will have a nice foal. We've got to give her the best opportunities we possibly can."

Dubawi is standing at a career high fee of £250,000 at Dalham Hall Stud in Newmarket.