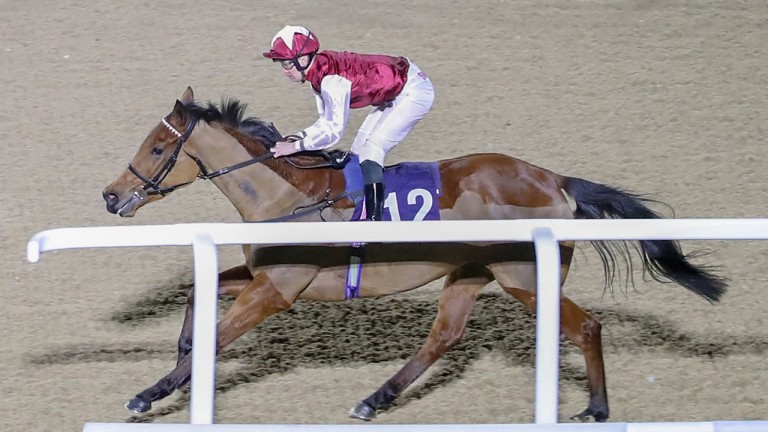 Trainer John Gosden has become well known for launching the careers of some of his best horses on the all-weather in the winter – most strikingly with dual Prix de l'Arc de Triomphe heroine Enable – and he repeated the trick at Newcastle on Friday with Severnaya, a wide-margin winner on her debut in a mile maiden.

In what was admittedly an ordinary contest, Severnaya was slow out of the stalls but soon gathered herself together and took the lead. It took only a shake of the reins from jockey Nicky Mackay for the filly to quicken clear two furlongs from home and despite drifting left a little she soared to a six-length victory.

Severnaya was bred by Godolphin and runs in the name of Sheikh Mohammed's daughter Sheikha Al Jalila, whose silks are the sheikh's storied maroon with white sleeves and maroon cap with white star.

She looks another outstanding prospect among the the three-year-old crop of Darley's superstar sire Dubawi, which has already yielded Group 1 victors Quorto and Too Darn Hot, Listed scorers Al Hilalee and Vachement and a multitude of exciting, unexposed novice stakes and maiden winners.

Zibelina and Floristry are in turn out of Zaeema, a winning Zafonic half-sister to Dante Stakes winner and Derby third Carlton House, from a family once nurtured at the Royal Studs that has also given us the high-class stayer half-brothers Duncan and Samuel, Group 1-placed sprinter Three Points and none other than Grand National hero One For Arthur.

Zibelina has a two-year-old colt by Shamardal and a yearling colt by Dubawi, and she had a third date with Dubawi last year.

FIRST PUBLISHED 9:03PM, MAR 1 2019
It took only a shake of the reins from jockey Nicky Mackay for the filly to quicken clear two furlongs from home

Hansen makes lengthy trip to win on agent Shelley Dwyer's Trinity Girl Strong start for the north but Newmarket Red end Racing League day one on top Racing League tips: race-by-race guide to the first meeting at Newcastle tonight Nasty incident for Hart as jockey is stood down after being kicked by his mount English tracks prepared for return of bumper crowds after easing of restrictions