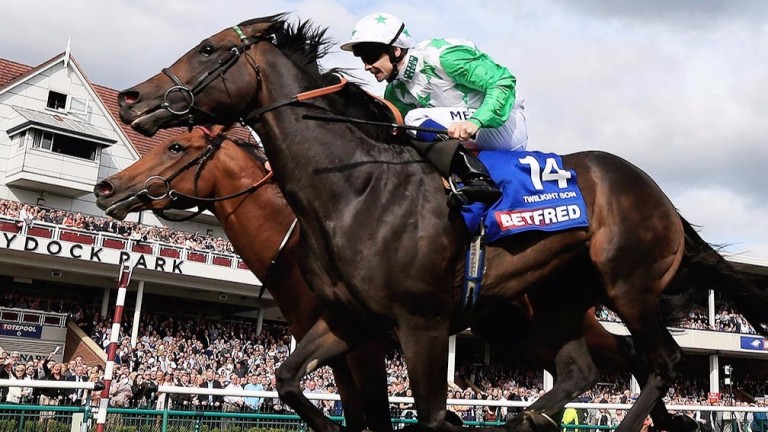 Dual Group 1-winning sprinter Twilight Son has been retired from racing and will begin his second career as a stallion at Cheveley Park Stud during the 2017 breeding season.

Trained by Henry Candy throughout his ten-race career, Twilight Son went unbeaten during his first five starts. He won both of his two-year-old starts and, having rapidly ascended the handicap ranks, concluded the quintet of successes with victory in the Group 1 Sprint Cup at Haydock on his first attempt at pattern level.

That victory saw him display the degree of class and heart that typified his career as he fended off Strath Burn by a short-head, with previous top-level winners Belardo, G Force, Tiggy Wiggy and Gordon Lord Byron further behind.

He concluded his three-year-old campaign with a highly creditable second to Muhaarar in the Champions Sprint Stakes at Ascot.

Twilight Son went on to double his Group 1 tally as a four-year-old when he returned to Ascot for the Diamond Jubilee Stakes during the royal meeting, when he battled gamely to defeat Gold-Fun by a neck in a pulsating five-way finish. Previous Diamond Jubilee Stakes winner Undrafted and subsequent top-level winners The Tin Man and Signs Of Blessing were also in behind.

Bred by Caroline Wilson, Twilight Son is by Kyllachy - who he will stand alongside at Cheveley Park Stud - and out of the winning Bin Ajwaad mare Twilight Mistress, which makes him a half-brother to five winners, most notably the Group 3-winning and Group 1-placed sprinter Music Master.

"The addition of Twilight Son further enhances the portfolio of stallions currently standing at Cheveley Park Stud and continues to reflect David and Patricia Thompson’s huge commitment to the international world of racing and breeding.

“We are most grateful to have been involved with Twilight Son’s breeders, Caroline and Godfrey Wilson, and of course to have been re-associated with trainer Henry Candy, who has done a fantastic job guiding Twilight Son throughout his highly successful career”.

Trainer Henry Candy added: “Twilight Son was a pleasure to train. He was a very relaxed horse. He never took a lame step and never left an oat.”

A fee for Twilight Son will be announced at a later date.

FIRST PUBLISHED 12:50PM, OCT 26 2016
Twilight Son was a pleasure to train. He was a very relaxed horse. He never took a lame step and never left an oat