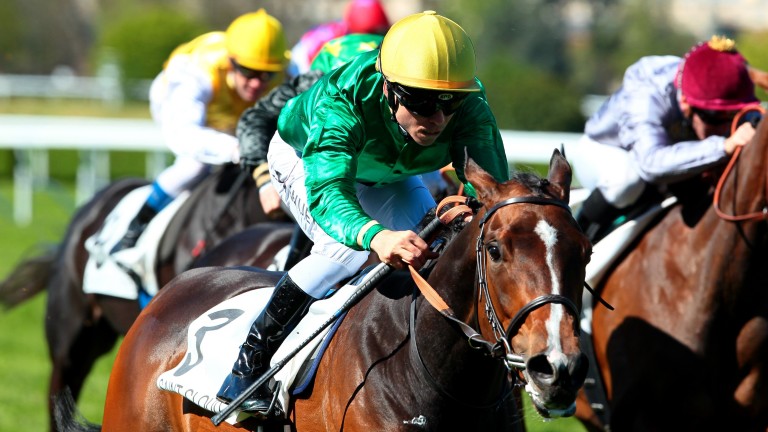 The Arqana Breeding Stock Sale gets under way on Saturday, with 953 mixed lots catalogued to go under the hammer throughout the four-day auction at the Deauville sales complex.

Among the highlights of the opening session, which include Chortle (Lot 72) - a Dubawi sister to dual Group 1 winner Hunter’s Light - and a Galileo foal sister to Galatee (159) - the dam of Dartmouth, sits Camprock (158), who is to be offered by Anna Drion’s Coulonces Consignment.

When the three-year-old daughter of Myboycharlie heads through the ring it will bring about the final chapter in what has been something of a fairytale story for Drion, with the Group 3-winning and Group 1-placed Camprock having been bred by her 15-year-old daughter.

“It’s a fantastic story,” said Drion. “My daughter, Moa, was given the dam, Camporese, by Tom Ryan to help give her a good start in life. She went to Myboycharlie and produced a beautiful filly.”

The choice of stallion has clearly been vindicated, but while the decision to use Myboycharlie, who at the time had just moved from the National Stud to Haras Du Mezeray, may have raised a few eyebrows, Drion insists she and her daughter never had any doubts about using the son of Danetime.

“We thought Myboycharlie was a very interesting stallion, the cross appealed greatly and physically we thought he’d suit this mare so it was an easy choice to make. There was never a question of using any other stallions,” she said.

Since going through the ring during Arqana’s October Yearling Sale in 2014, where she was bought by Drion and trainer Pia Brandt, Camprock has never looked back, and she now returns to the Deauville sales having won her first three of five starts, a hat-trick which culminated with success in the Prix Penelope at Saint-Cloud in April.

“We’ve been to every race,” Drion revealed. “It’s been amazing, there’s been a lot of emotion and we’ve also learned a lot during this year owning a filly like this. Suddenly you understand what it means to be involved in such a successful horse.”

After a good deal of contemplation Drion nominated the Group 3 win as the highlight of Camprock’s racing career, saying: “That’s when we actually realised how good she was. It was just a magical day, not only for me and my daughter but for all the people involved in the filly. A lot of things just fell into place.”

Camprock was to provide the mother and daughter duo with one final memorable day, as she finished runner-up, beaten just a head by Jemayel, in the Group 1 Prix Saint-Alary in May, having only made her racecourse debut in late-January.

“There’ll be a lot of tears on Saturday evening,” Drion said. “My daughter is at boarding school in Sweden so unfortunately she can’t be here. It’ll be emotional for her but she’s been passionate about breeding since she was very small. She’s working so hard at the moment so she deserves the success, I’m very proud of her. I think she’ll play a big part in this industry in the future.”

Moa may have got off to a fantastic start with Camprock, but there could be better still to come from the young breeder, who currently owns four broodmares.

Earlier in the year the Orpen colt she bred out of the Hawk Wing mare Camdara sold for €55,000 at Arqana, and the mare has since produced an “absolutely cracking” No Nay Never filly and is in foal to Olympic Glory.

She also has Pretty Darling, a winning Le Havre half-sister to leading two-year-old Peace Envoy who is due to visit Power, a Montjeu filly called Dalamar, who she owns in partnership with Haras du Grand Chene head girl Charlotte Hutchinson, who is in foal to Le Havre and is due to visit Siyouni in 2017.

And, perhaps of most interest, she also has an Astronomer Royal half-sister to Camprock called Sophie Royale, who is due to visit Myboycharlie.

“It’s been a beautiful story,” concluded Drion. Here’s hoping there will be a happy ending during Saturday’s session of Arqana’s Breeding Stock Sale.

FIRST PUBLISHED 11:58AM, DEC 3 2016
There's been a lot of emotion and we've also learned a lot owning a filly like this