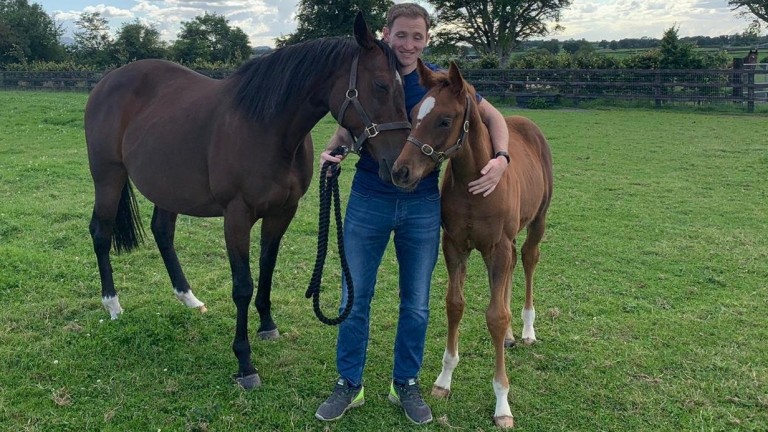 Kevin Blake flanked by Midnight Oasis and her Camacho colt foal. The Oasis Dream mare is in foal to Caravaggio
Kevin Blake / Twitter
1 of 1
By Ollie O'Donoghue UPDATED 9:37AM, JUL 22 2020

The Acclamation colt races in the colours of Middleham Park Racing, having been purchased by Peter and Ross Doyle for £95,000 from Tinnakill House at the Goffs UK Premier Yearling Sale.

Ventura Tormenta - mentioned as a possible Prix Morny contender - is one of seven winners from as many runners, all bred by Blake, out of Midnight Oasis.

The Oasis Dream mare also has a Starspangledbanner yearling colt who was pinhooked by Redwall Bloodstock for €40,000 at the Goffs November Foal Sale, and an April-born colt foal by Camacho. She is in foal to Caravaggio.

"It was brilliant what happened on Sunday but especially for the mare - she really deserved it," said Blake, who also acts as race planner for Joseph O'Brien.

"She's thrown two horses prior to this with official ratings of 106 and 107 and they haven't got a bit of black type between them, so she's earned the right to have a black-type performer on her page. It was great to get it in a Group 2 obviously, absolutely unbelievable.

"She's been a dream mare, especially for a small breeder trying to get going. She's had seven runners and seven winners - the majority of them won at two, they all try hard and have tended to have good, long careers.

"Her exploits have allowed me to upgrade and add to the facilities on the home farm and she's fairly special in this neck of the woods. I used to prep and consign them myself but as I got a bit busier with work, it made more sense to send them out and Tinnakill do a great job."

Blake added that the mare is in good health at the age of 15.

"She's very much led the way and will hopefully lead the way for another while," he said. "She's in great shape for her age, and she's very straightforward to get in foal.

"She puts everything into her foals and throws an awful lot of strength into them - they all tend to thrive, so you keep them in light pasture to try and keep weight off them.

"I have her Gutaifan filly Funny Little Ways, her only daughter, in training with Joseph and she won earlier in the year, so she'll eventually come home to become a broodmare, which is great.

"Middleham Park Racing did a fabulous job putting Ventura Tormenta into that race, getting him ready and supplementing him. Genuinely, it was a brilliant bit of placing and they deserve a lot of credit."

Midnight Oasis was purchased privately by Blake from her owner-breeder Chris Mills in 2008 and has visited a different stallion each year since retiring to stud.

Her progeny are headed up by the prolific handicap scorers George Bowen and Mr Win.

The Dark Angel gelding George Bowen excelled as a sprinter, winning the Bold Lad Handicap at the Curragh on Irish Champions Weekend in 2015.

"All I could afford at the time was cheap mares, so I was keeping an eye on sellers and claimers for fillies with pedigrees," recalls Blake.

"She had a great page for a filly that was going into a seller - by Oasis Dream, from a great sprinting family going back. Her page probably didn't look as good as it was. She had two half-brothers rated in the 100s but who didn't earn black type.

"Of the three aspects - race record, pedigree and conformation - I could only really afford one of them and my focus was on pedigree. Chris Mills had developed the family for an awfully long time and fair play to him, he agreed to sell her privately before she ran.

"She wasn't a great racemare and didn't have the best physical either, but she has that strong page backing her up, which is why I took the chance. It was very much a punt and thankfully it's worked out."

Oasis Dream is carving out a fine reputation as a broodmare sire with his daughters responsible for two top-flight winners in June.

The Teofilo filly Tawkeel blitzed clear of her rivals in the Prix Saint-Alary in France, while the First Defence colt Siskin enhanced his fine reputation in the Irish 2,000 Guineas at the Curragh.

FIRST PUBLISHED 7:12PM, JUL 21 2020
Her exploits have allowed me to upgrade and add to the facilities on the home farm and she's fairly special in this neck of the woods