James Thomas reports from the second session at Park Paddocks 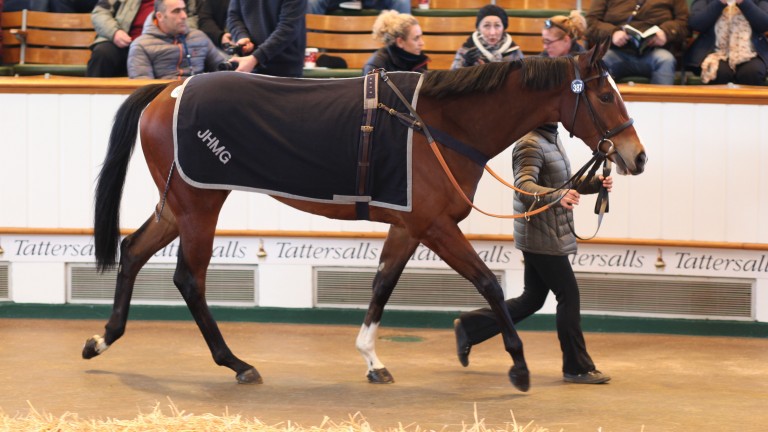 After Thursday’s record-breaking session of the February Sale, Friday brought with it a day of trade which was more solid than spectacular, with the six-figure barrier only being breached on one occasion.

The six-figure barrier was broken for the only time when Dream Waltz, a twice-raced daughter of Oasis Dream consigned by John Gosden’s Clarehaven Stables, went the way of Tattersalls marketing director Jimmy George, who was taking instructions on the phone from the Broadhurst Agency - who in turn were acting on behalf of Australian owner Peter Maher, for 105,000gns.

“Peter owned her dam and so has a strong affinity for the family and was keen to buy her daughter," said George. "She will be shipped to Australia now and I expect will go to the breeding shed.”

The filly, who was bred and raced by George Strawbridge, is out of the Be My Guest mare Valentine Waltz, who won the 1999 renewal of the Poule D’Essai des Pouliches for Gosden. She is a half-sister to the Listed-winning Dyna Waltz, while the likes of Grade 1 winner Sense Of Style and champion three-year-old and leading sire Last Tycoon also appear further back on the page.

By the close of trade Clarehaven had sold 12 lots for 446,500gns to finish the sale in third on the leading vendors by aggregate table.

“He’s going to go to Rebecca Menzies,” said Creighton. “He’ll be tried as a dual-purpose horse. Hopefully we’ll have some fun over hurdles and on the Flat as well. Rebecca’s a young trainer and she deserves a good horse. John is keen to support her.”

The son of Zoffany won on two of his ten starts for Gosden, and was last seen finishing a close third in a Newmarket handicap, where he ran to a Racing Post Rating (RPR) of 103.

The four-year-old colt is out of the Sri Pekan mare Tropical Lady who won the Group 2 Royal Whip Stakes for Jim Bolger. The exploits of Von Blucher’s second dam, Tropical Lake, will give hope that he will take to the jumping game, as she was trained by Michael Hourigan to win four times over hurdles, including 1994 renewal of the Grade 2 Anniversary Hurdle at Aintree.

Creighton, Dance and Salcey Forest were active throughout both days of the sale, having secured a number of mares with which to support Pearl Secret who they are standing for the 2017 breeding season at a fee of £4,000.

Dandyman Port, a daughter of Ballyhane Stud resident Dandy Man, went the way of Andy Cosias for 75,000gns, and is now set to join the Tipperary yard of Des Donovan.

"It's nice to get a filly," said Donovan. "Hopefully we can find a bit of soft ground for her - she's proven on soft - and hopefully she'll be lucky."

The filly, who is out of the unraced Byron mare Fillthegobletagain - a half-sister to the dam of Listed winner Max One Two Three, made a winning debut at Dieppe for Eoghan O’Neill, and has finished third on both subsequent starts. Her half-sister, Al Dallah, is a dual-winning two-year-old in Qatar.

Flower to blossom in Czech Republic

For much of the opening exchanges trade was headed by Flower Of Love, a daughter of Poet’s Voice offered by Simon Crisford’s Calne Stables on behalf of Rabbah, who went the way of Jiri Drag from the Czech Republic for 48,000gns.

"She will continue to race but is to breed from too," said Drag, who will send the three-year-old into training with leading Czech trainer Frantisek Holcak.

Flower Of Love, twice a winner at three, is a half-sister to the Listed-winning Shamardal mare Pelerin and the Listed-placed Masarah, a daughter of Cape Cross, while her page also features Fillies’ Mile winner Hibaayeb.

Later in the session the 48,000gns mark was again hit, with Richard Brown of Blandford Bloodstock securing Tegara from James Fanshawe’s Pegasus Stables draft. The four-year-old daughter of Hard Spun and the Listed-winning Elusive Quality mare Damaniyat Girl ran to a peak RPR of 76 when winning a Kempton maiden back in August

“Damaniyat Girl was very talented and it’s still a very young family,” said Brown. “I’ve seen quite a lot out of the family and they’re all very good-looking. She’s going to go back into training with David Simcock. She may well be covered in the spring, we’ll see. We’ll let Cocky have a little look at her and then make a decision.”

In his end of sale statement Tattersalls chairman Edmond Mahony commented: “The Tattersalls February Sale has achieved phenomenal growth in recent years and the 2017 renewal has taken it to a new level. As recently as 2010, the turnover at the February Sale was less than a million guineas and the average price below 7,000 guineas.

"This year we extended the sale to two days for the first time and the turnover has soared to nearly 6 million guineas, more than double last year’s record level, the average has reached a new record of 16,944gns and even last year’s impressive clearance rate of 82 per cent has jumped to 89 per cent.

“The obvious highlight of the sale was the 500,000 guineas paid for the outstanding race filly Easton Angel, another new record for this fixture, but the real feature of the sale has been the extraordinary depth to the trade in all sectors of the market and, as ever, the contribution made by overseas buyers from throughout Europe, the Gulf region, America and as far afield as Australia.

"More six-figure lots than ever before demonstrates the enduring global appeal of quality bloodstock, but it is equally important that sales of this nature attract buyers at all levels of the market and the sustained demand from start to finish has been just as gratifying as the individual highlights and the record returns.”