Dixie Victory the highlight of fourth session of January Sale 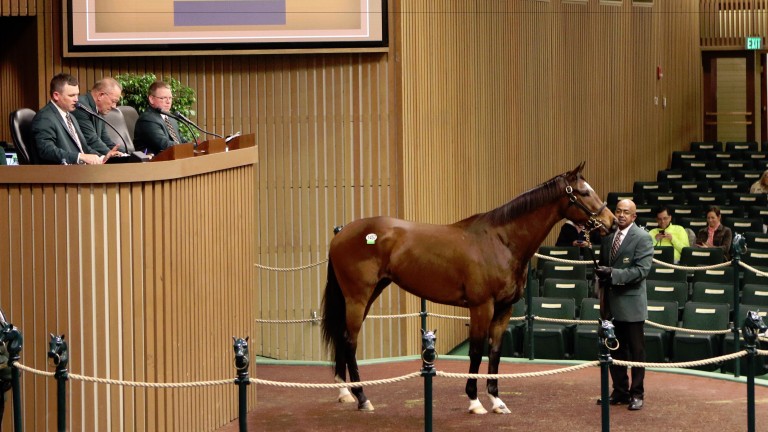 Dixie Victory selling in the ring at Keeneland
Keeneland Photos
1 of 1
By Ron Mitchell of Blood-Horse 12:59PM, JAN 13 2017

Dr E C "Pug" Hart and Susie Hart came to the Keeneland January Horses Of All Ages Sale looking for a replacement for their late mare Miz United States, and left with Dixie Victory, who topped the penultimate session on Thursday at $100,000.

Bought by the Harts under the name of Willow Wood, the winning six-year-old daughter of Dixie Union was consigned as a broodmare prospect as Hip 1457 by Shawhan Place.

"She's a beautiful mare," Susie Hart said, noting she paid more than she expected for the mare. "She was the right physical, had the right look, had a live pedigree, and is a half-sister to a current Graded horse. I wanted to buy her for $50,000, but all the smart guys are here. Any time a really good one comes in, you can't hide them."

"I loved her. She was a great mare," Hart said. "I was looking for a replacement for her, so hopefully this mare will be with us for a good long time."

Bred in Kentucky by Stonestreet Holdings, Dixie Victory was produced from the Grade 1-winning Artax mare Friendly Michelle and is a half-sister to stakes winner and the Graded-placed Bonita Bianca.

"We were surprised," Koch said. "We knew she was going to do well. She was popular at the barn and very well received. You are always excited when one goes beyond your expectations. Obviously we were extremely happy."

Koch said the market during Thursday's session was either feast or famine.

"You hit one out of the park like that and the next one you don't get a bid," he said.

Dixie Victory was the only six-figure horse during a session in which gross, average, and median prices trended downward and the buyback rate rose.

Through day four, the 398 horses that were withdrawn represented 26 per cent of the 1,549 cataloged, with 361 horses bought back, for an RNA rate of 31 per cent of those through the ring. At the same point a year ago, the RNA rate was 24 per cent.

The day's second-highest price and top for a short yearling was the $67,000 bid of Robertson Q. H. for Hip 1515, a filly from the first crop of Goldencents. Consigned by Susan Forrester, the filly foaled February 13, 2016, is from the family of multiple Grade 3 winner Halo's Image.

The colt, from Zenyatta's family and out of a Curlin mare, was bought by Dennis Farkas.

Four Stars Sales was leading consignor on the day, selling 43 for $447,300, and the entity's Kerry Cauthen said he has been satisfied with prices brought by the consignment.

The Harts' lone purchase made them the day's leading buyer by aggregate.