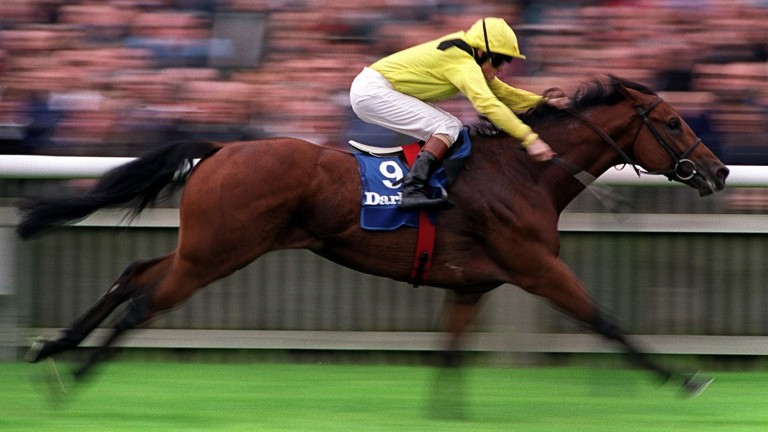 Tobougg: son of Barathea ran out a comfortable winner of the Dewhurst at two
Edward Whitaker
1 of 1
By Ollie O'Donoghue UPDATED 3:00PM, JAN 4 2019

Tobougg - an impressive winner of the Dewhurst Stakes at two and third to Galileo in the Derby at three - died at Anngrove Stud just before Christmas due to a suspected case of laminitis at the age of 20.

A brilliant juvenile colt for trainer Mick Channon, Tobougg opened his account in a 7f maiden at York and followed up in the final running of the Group 1 Prix de la Salamandre and the Dewhurst.

Those performances led to him being sent off favourite for the 2,000 Guineas the following May, when switched to the care of Saeed Bin Suroor, though he failed to trouble the leaders and eventually faded into ninth.

Tobougg appeared back to his best when third behind Galileo and Golan in the Derby on his next start and fourth to Medicean in the Eclipse that summer, before two runner-up efforts in the Champion Stakes at Newmarket and Hong Kong Cup at Sha Tin.

He returned as a four-year-old, though lacked the same sparkle he had shown at two and three before being retired to stud.

The son of Barathea stood six seasons at Dalham Hall Stud in Newmarket - from where he sired the German 1,000 Guineas winner Penny's Gift - and shuttled to Darley's Australian base between 2003 and 2007 - when he supplied the New Zealand 2,000 Guineas scorer The Pooka.

After Dalham Hall, Tobougg was transferred to Clarendon Farm, where he stood alongside champion stayer Double Trigger. He then took up residence at Anngrove Stud in 2013, where he held court for six years.

"Tobougg was a wonderful horse to have anything to do with," said Alastair Pim of Anngrove Stud in County Laois. "He was a gentleman of a horse."

Tobougg is also establishing himself as a broodmare sire of note, with his winning daughter Screen Star having produced Cheveley Park Stakes heroine Lumiere and EP Taylor Stakes scorer Sheikha Reika, both by Shamardal.

Among the best National Hunt runners for Tobougg is the Listed-winning chaser Bouggler, while his winning daughter Milliegait has produced the smart bumper pair Gaitway and Diamond Gait.

Bred by Citadel Stud, Tobougg changed hands for 230,000gns at the Tattersalls yearling sales in 1999, when bought by John Ferguson from Knocktoran Stud.

Tobougg was one of five winners - together with Listed-winning miler Otavalo - out of the top-class filly Lacovia, a daughter of Majestic Light who landed the Prix Saint-Alary and Prix de Diane in 1986.

She in turn is out of a Secretariat half-sister to Miswaki, another winner of the Salamandre who is best known as the sire of Arc winner and legendary producer Urban Sea.

FIRST PUBLISHED 1:00PM, JAN 4 2019
Tobougg was a wonderful horse to have anything to do with - he was a gentleman of a horse