Demarchelier's half-brother the star turn at Chelmsford on Monday

William Haggas saddles the sibling of the smart US performer 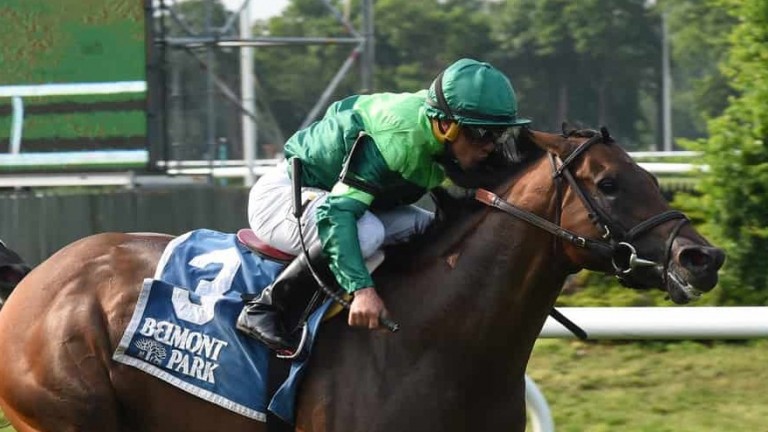 Lightly-raced Demarchelier is regarded as an exciting new stallion in America
Coglianese Photos
1 of 1
By Tom Peacock 1:03PM, NOV 24 2019

As Demarchelier prepares to enter the stallion ranks at Claiborne Farm in Kentucky next year, his younger half-brother makes his first tentative racecourse steps at Chelmsford on Monday.

A Star Above, trained by William Haggas, already looks a clever purchase by Rabbah Bloodstock on behalf of Sheikh Juma Dalmook Al Maktoum, as he cost just 70,000gns from Tattersalls Book 1 last October.

This was before the Dubawi-sired Demarchelier had even appeared on the scene. Bought by Peter Brandt's White Birch Farm for 425,000gns the year before, he won a maiden for Chad Brown in November and raced through the ranks in an allowance event and the Grade 3 Pennine Ridge Stakes.

He was sent to the Grade 1 Belmont Derby as a key contender but took a bad step and was ultimately retired with glowing praise from his trainer, who said: "Demarchelier had as much talent and turn of foot as any young turf colt I've trained to date."

The Newsells Park-bred pair are out of Loveisallyouneed, an unraced Sadler's Wells sister to Group 1 winners Quarter Moon and Yesterday, part of the extended family of the likes of Eminent, Alborada, Aussie Rules and Coronet.

Newsells sold a yearling by Golden Horn for 80,000gns to Darragh McCarthy at this year's Book 2 and has engaged a full-sister to A Star Above in the imminent Tattersalls December Foal Sale.

With the Haggas stable still in good form, he should be popular in the Extra Places At totesport.com Novice Stakes over a mile and a quarter but a trio of more experienced John Gosden trainees lie in wait.

FIRST PUBLISHED 1:03PM, NOV 24 2019
Newsells Park has engaged a full-sister to A Star Above in the imminent Tattersalls December Foal Sale