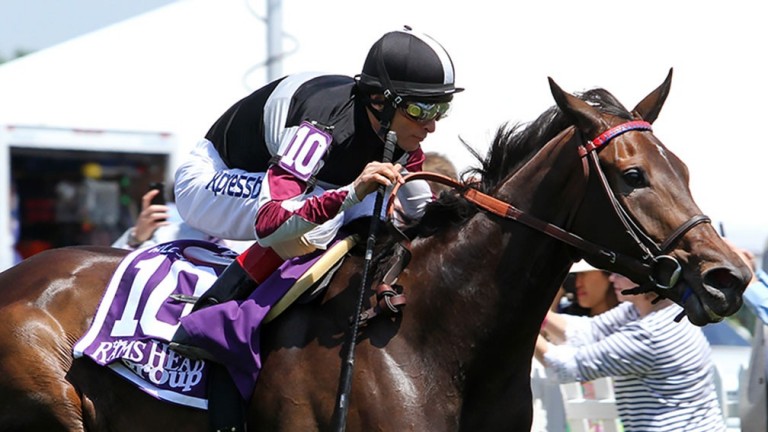 Del Mar was the scene of a Grade 1 double for Temple City this weekend as both Annals Of Time and Temple City scored at the top level.

Annals Of Time led home a stable one-two for Chad Brown in the Grade 1 Hollywood Derby on Saturday, seeing off Beach Patrol by one and a half lengths.

Bred by Monticule out of the Distant View mare Lemon Haze, Annals Of Time is a half-sister to the Listed third Sharp Sally.

Annals Of Time won his two-year-old maiden at Aqueduct and was runner-up in an allowance race on his first start as a three-year-old. He finished third to Camelot Kitten in the Grade 3 Hill Prince stakes at Belmont.

Miss Temple City, a four-year-old filly bred by Bobfeld Bloodstock out of the Artax mare Glittering Tax, completed the big race double for her sire when beating Roca Rojo by a nose in the Matriarch Stakes on Sunday.

Miss Temple City was successful twice previously at the top level, having won the Maker's 46 Mile Stakes and the Shadwell Turf Mile Stakes, both on the turf at Keeneland, this year.

Her year-younger sister Pricedtoperfection, won the Grade 3 Sweetest Chant Stakes at Gulfstream Park in January, and finished fourth in the Grade 1 Belmont Oaks.

Remarkably, considering her later exploits, Miss Temple City was unsold at just $10,000 as a short-yearling at Keeneland in January 2013.

Temple City, an 11-year-old son of Dynaformer, was bred by B Wayne Hughes and raced in the colours of Spendthrift.

His biggest win appropriately came at Del Mar, when winning the Grade 3 Cougar Handicap over 1m2f. His other Graded performances included finishing runner-up in the Grade 1 Hollywood Turf Cup and the Grade 2 American Handicap.

He retired to stand at Spendthrift Farm in Kentucky as a six-year-old, and has stood there for the last six seasons with his stud fee set for 2017 at $10,000.