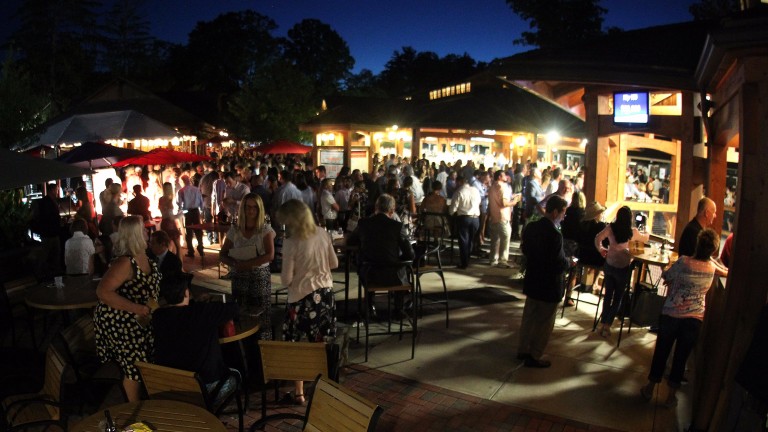 Though domestic players dominated the overall action, breeders and buyers from around the globe proved active at the Fasig-Tipton Saratoga selected yearling sale.

Several Irish-based breeders sent horses to the ring sired by Coolmore stallions, including a trio on Tuesday by young sire Declaration Of War. Among these, Hip 196, a filly bred by Timmy Hyde's Camas Park Stud and consigned by Eaton Sales, agent, led the way when sold for $325,000 to Virginia-based PTK stable of Thomas Haughey.

Declaration Of War stood this season for $35,000 at Coolmore's Ashford Stud in Kentucky, after beginning his career at its base in Ireland.

His son out of Grade 1 winner Harmony Lodge, by Hennessy, and bred in Kentucky by the Conroy family's Glenvale Stud of County Tipperary, drew a final bid of $245,000 from Bruce Lunsford, agent, when presented by Hunter Valley Farm as Hip 201.

Another Declaration Of War colt, Hip 153 from the family of Grade 1 winners Starrer and Stellar Jayne and bred by Peter Magnier, was reported sold for $185,000 to trainer Jason Servis from the Eaton Sales consignment.

Overall, four Declaration Of War yearlings were sold at Saratoga for an average of $247,500. Eaton's Reiley McDonald is among those who believes that the stallion is producing strong, athletic types and that his stock is likely to rise – and perhaps quickly, with daughter Actress a possible runner in the Keeneland Phoenix Stakes at the Curragh on Sunday.

"Actually, I think the Declaration Of Wars are going to get very expensive in a big hurry," McDonald said, adding that both of the yearlings he sent to the ring were "big, strong, athletic horses."

By War Front and a multiple Group 1 winner, Declaration of War has 134 two-year-olds in his first crop, conceived in Ireland (with an additional individual reported born prematurely in December 2014). He also has 117 yearlings, according to American Jockey Club records.

In other international activity, Australian-based agent Guy Mulcaster paid $575,000 for Hip 122, a Medaglia d'Oro colt out of multiple
stakes winner Anne Of Kiev. Mulcaster said the colt would be sent to either England or Ireland for racing.

The sale also had a small dash of Japanese flavour. Kenji Ryotokuji, a rising owner and buyer of bloodstock in Europe and America, purchased a Scat Daddy filly for $340,000 and a Tiznow colt for
$450,000, with agent Takashi Iiyama doing the bidding. And Japanese bloodstock manager Nobutaka Tada banked $995,000 from Godolphin's European branch for Hip 226, a War Front full brother to Grade 1 winner Avenge that he bred in Kentucky.