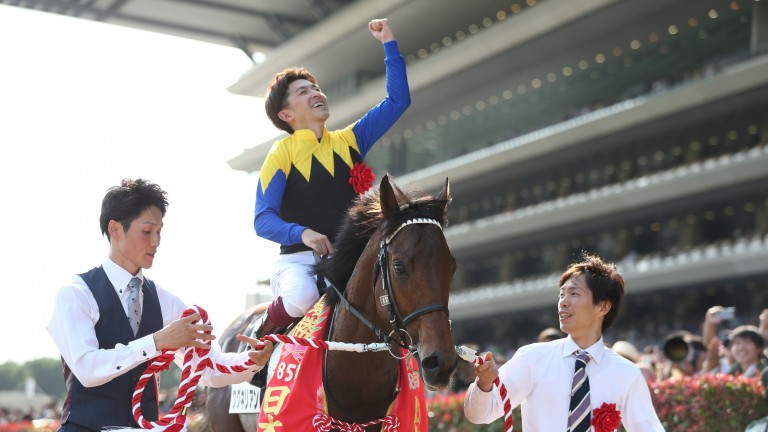 Wagnerian: the son of Deep Impact after the Japanese Derby
Masakazu Takahashi
1 of 1
By James Thomas UPDATED 6:54PM, SEP 10 2018

A deadly earthquake that struck the Japanese island of Hokkaido on Thursday has claimed a significant equine casualty, with Miss Encore, the dam of this year's Japanese Derby winner Wagnerian, having to be euthanised after suffering a fracture to her hind leg.

The 12-year-old daughter of King Kamehameha had been grazing in her paddock at Northern Farm when the quake, measuring 6.7 on the Richter scale, struck in the early hours of the morning. Miss Encore was found to have suffered the injury to her near hind at dawn.

Speaking to local media, Northern Farm chief executive Katsumi Yoshida said: "I didn’t announce it just after the disaster, but only Miss Encore has been a victim of this earthquake in my farm. I am very sorry. I have told the owner Mr. Makoto Kaneko already."

Bred by Kaneko Makoto Holdings, Wagnerian became a record fourth winner of the Tokyo Yushun (Japanese Derby) for the powerful owner, following on from King Kamehameha in 2004, Deep Impact in 2005, and Makahiki in 2016.

Hokkaido is also home to the Shadai Stallion Station, home of Deep Impact - the world's most expensively advertised sire at ¥40m (£261,000/€294,000). In a Facebook post on Thursday the farm said that all staff and horses were safe and that there was no major damage to property, but that the farm had suffered a power outage.

The quake has caused significant damage to homes across Hokkaido, with local media reporting the death toll has risen to 42.

FIRST PUBLISHED 10:09AM, SEP 10 2018
I didn’t announce it just after the disaster, but only Miss Encore has been a victim of this earthquake in my farm

Go behind the scenes at Lord and Lady Lloyd Webber's Watership Down Stud Premature death of Arrogate leaves an almighty hole in Juddmonte's US roster First-season sire Mehmas making up for lost time with quick-fire double Additional Plus 10 scheme races added for two-year-old colts and geldings David Futter: 'I wouldn't swap any of our stallions as this is a long game' Relief for many: racing's return means a kickstart for the sales wheel