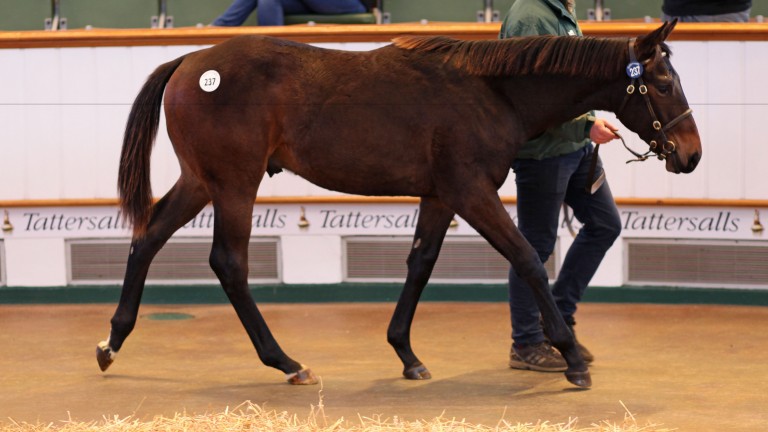 One of the opening session's leading lights was a son of Gregorian who went the way of Rathasker Stud’s Madeline Burns for 47,000gns provided breeder Kelly Thomas with a welcome sense of de ja vu.

Thomas, who runs Maywood Stud in Carmarthenshire, had previously topped the opening session of the Tattersalls December Foal Sale back in 2014 when the Bated Breath colt out of Frabjous sold to Peter and Ross Doyle for 65,000gns.

This year’s second top-lot may not have generated quite the same return, but the success was no less sweet for Thomas, who bred the colt out of the winning Diamond Green mare Miskin Diamond.

"Jill Lamb helps us and she bought Miskin Diamond as a yearling," she explained. "We raced her and then she came back to the stud. We thought Gregorian was value - he's a good looking horse and a great mover. I was absolutely delighted with that price and I’m pleased the Burns’ bought him - he’s gone to the right place. The horse is a lovely individual with a great walk.”

Thomas, who also sold an Alhebayeb colt for 4,000gns to Patrick Donworth and who will offer a “lovely” Dream Ahead colt during Thursday’s session, added that she was heartened with how Miskin Diamond’s offspring have been received at the sales, after her yearling colt by Epaulette sold to the Doyles for 45,000gns during the December Yearling Sale on Monday.

“I’m pleased the Epaulette’s going to Richard Hannon,” she said. “I’m pleased with the mare too. She’s in foal to Gutaifan at the moment but I’m undecided as to who she’ll go to next year. We’ll try and find something that’ll be commercial, it’s crystal ball time at the moment!”

FIRST PUBLISHED 8:00PM, NOV 23 2016
I was absolutely delighted with that price and I?m pleased the Burns' bought him - he's gone to the right place