Saturnas was a convincing winner at Leopardstown on Tuesday 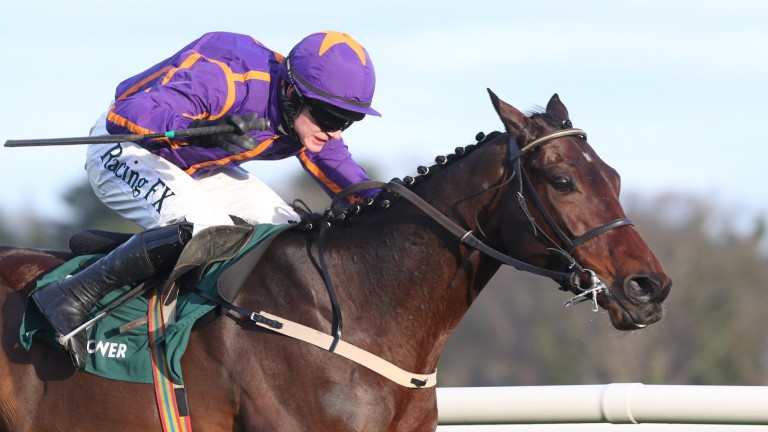 Walk In The Park and sons Douvan and Min have reaffirmed how seamlessly Montjeu has picked up the baton from his own father Sadler’s Wells as a fine sire of sires in the jumps sphere.

Montjeu himself supplied legendary hurdler Hurricane Fly among a host of talented jumpers, while other sons Authorized, Montmartre and Scorpion have also got Grade 1 winners on the board.

Another, Motivator, may not have a jumps Graded winner to his name but he has had two runners-up in the Champion Bumper at Cheltenham in Modus and New Year’s Eve.

Now a new able jumps stallion son of Montjeu has emerged. Saturnas, the convincing winner of the Future Champions Novice Hurdle at Leopardstown on Tuesday, is one of 27 foals from the second crop of the unheralded Davidoff, a German-bred Group 3 winner in his native country who stands for small money at Haras de la Kammerholtz near Strasbourg in France.

Agents and trainers looking for more by the sire will have a tough job on their hands, as he has sired only around 60 foals in his subsequent five crops.

Davidoff may be an unfamiliar name in Britain and Ireland, but his ‘cousin’ certainly is not: his dam, German 1,000 Guineas runner-up Dapprima, is a half-sister to Depeche Toi, who produced none other than this year’s Cheltenham Gold Cup hero Don Cossack.

It was very nearly four top-level winners for sons of Montjeu in the space of two days this week as Scorpion’s son Might Bite fell at the last when clear in the Kauto Star Novices’ Chase on Monday. Scorpion has been transferred from Coolmore to Shade Oak Stud in Shropshire for 2017.

The many breeders who have sent mares to the likes of Fame And Glory (first crop three-year-olds in 2017), Frozen Fire (first four-year-olds), Leading Light (first yearlings) and Masked Marvel (first yearlings) in their early years will take encouragement from the run of success, which is also a timely boost for 2017 recruits Ol’ Man River and Walzertakt.

FIRST PUBLISHED 8:00PM, DEC 28 2016
It was very nearly four top-level winners for sons of Montjeu in the space of two days this week