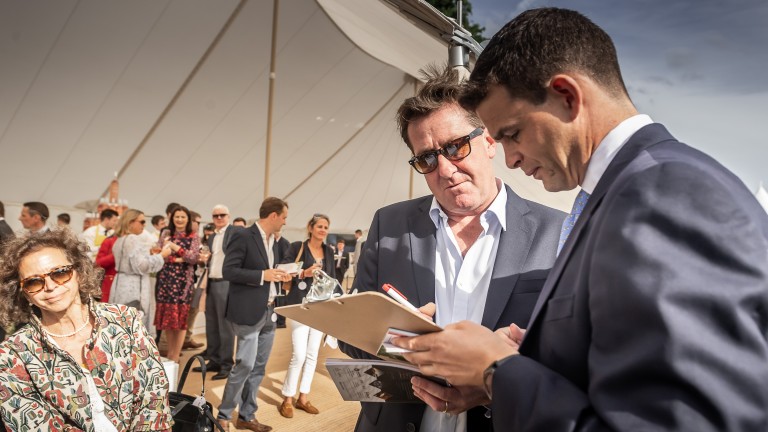 A short, sharp session of selling took place in a leafy corner of Kensington Palace Gardens on Monday evening, and by the time the last of 22 lots had been offered at the Goffs London Sale, held in association with Qipco, ten horses had sold for turnover of £3,150,000.

Heading trade was Mohican Heights, the two-year-old son of Australia who ran out a cosy winner of a Leopardstown maiden on his debut for Fozzy Stack last month. After a ping pong round of bidding across Perks Field it was David Simcock, stood beneath the shade of one of the stretched tents, who won out with an offer of £520,000.

"We looked at the video of his debut, he's an interesting horse and bred to stay and I had a couple of clients who were interested so it's worked out," said Simcock after signing the docket. "The clients, who are already in the yard, are always on the lookout for a nice horse and he's certainly going to get middle distances so he fitted in well."

Simcock has first-hand experience with this colt's family, having trained his Mastercraftsman half-brother Curbyourenthusiasm, a four-time winner who also finished runner-up in the Group 2 Yorkshire Cup. Curbyourenthusiasm is one of five stakes performers out of the Shirley Heights mare Mohican Princess, a number that also includes the Group 3 winners Eye Of The Storm and Satchem.

"We know the family well, we've already trained one of his siblings, and they all stay well," said Simcock, who added that he was unsure whether the horse would take up his entry in Saturday's Chesham Stakes, for which he is currently around 16-1.

"I'm not sure yet, I doubt it but I don't know. We might wait until later on in the year," said Simcock when quizzed on the horse's Ascot engagement.

Stack was among the first to come and shake Simcock's hand, and the trainer said: "He deserved to make that price, as does every horse who wins a Leopardstown maiden first time out and is bred the way he's bred. He beat a nice field on debut and he's a very nice horse. I hope he's very lucky for the next owners.

"The guys who owned him were slightly anxious to sell him and this seemed the logical place." 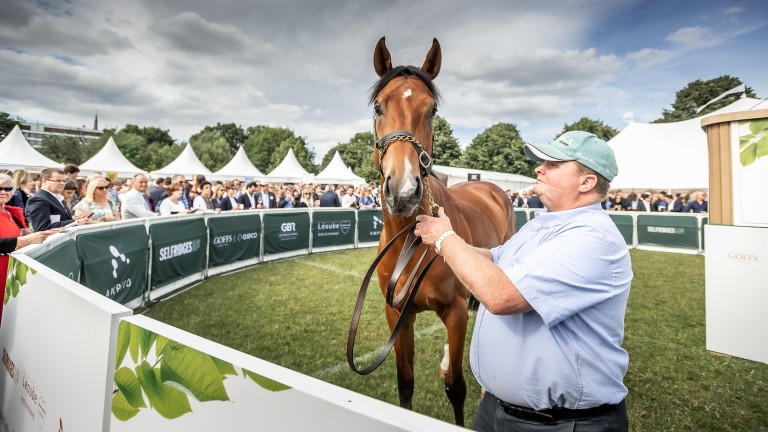 Tinnahalla, the first lot in the ring, was purchased by Jamie Osborne for £105,000 on behalf of Richard Diaz
Sarah Farnsworth / Goffs

Monday evening saw Mohican Heights take his second turn in the sales ring, having been bought by David T Greathouse II and Jules Sigler through Deuce Greathouse for €100,000 at the Goffs Orby Sale.

The second horse to break the £500,000 barrier was the very last horse offered, with Federico Barberini hitting the half a million mark to secure Pure Zen, a Listed-winning daughter of Zoffany, on behalf of an undisclosed Italian client.

The session's third-top lot came when Matthew Houldsworth landed the rapidly progressive Le Don De Vie with a bid of £460,000. The three-year-old son of Leroidesanimaux, who was last seen running away with a red-hot Epsom handicap on Derby day, will now continue his racing career with Hughie Morrison.

"He's been bought for Aziz Kheir, who's a prominent owner in Australia and also owns half of Marmelo who's in training with Hughie Morrison," said Houldsworth. "This horse will be with Hughie for the foreseeable future before possibly heading to Australia, perhaps next season. He's been bought with Matt Becker of Group 1 Bloodstock, who looks after Aziz's interests." 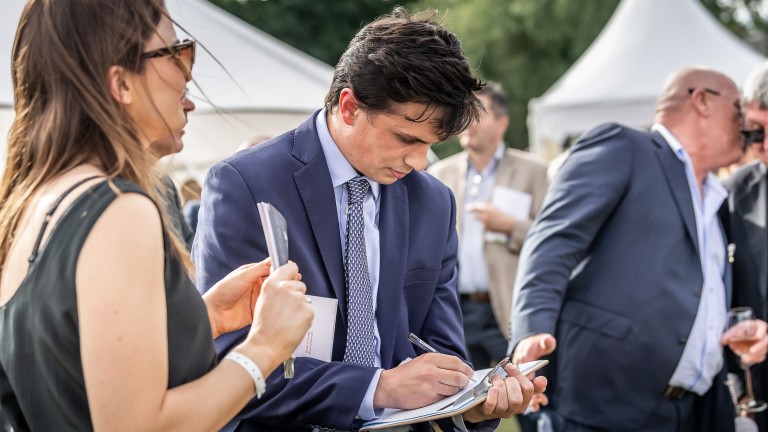 Le Don De Vie's value has soared under the tutelage of Andrew Balding, as the trainer secured the youngster, the first foal out of a Selkirk half-sister to Group 1 winner Lady Marian, on behalf of Mick and Janice Mariscotti for 50,000gns at Book 2 of the Tattersalls October Yearling Sale.

"The horse has a very good profile and was really impressive when winning at Epsom, which is a very hard track to go to and win by a wide margin. He's a progressive horse and he'll suit the Australian scene," said Houldsworth.

"He's been bought to progress quietly over here," added Morrison. "He vetted very well and he's a very natural, relaxed horse. These horses are difficult to come by. I know he's entered on Thursday [in the King George V Stakes] but we'll take a view on that."

Given the premium nature of the lots on offer, with 13 horses boasting a Royal Ascot entry, it was not a huge surprise to see a number fail to reach their ambitious reserve prices. One such lot was Forever In Dreams, a Listed-winning daughter of Dream Ahead offered by Con Marnane's Bansha House Stables, who was later secured by the Phoenix Ladies Syndicate in a private deal outside of the ring for £430,000.

The three-year-old was last seen winning the EBF British Stallion Studs Cecil Frail Stakes for trainer Aidan Fogarty, and is due to line up in the Group 1 Commonwealth Cup on Friday.

"She'll run in the colours of the Phoenix Ladies Syndicate on Friday," said Phoenix Thoroughbreds' Tom Ludt. "They've had a lot of fun already and had three horses run in the UAE Derby, they didn't get the results they wanted there but they did great in the run up to that race."

Forever In Dreams was bred by Marnane, who retained the filly at just €10,000 when offered by his daughter, Amy, at the 2016 Goffs November Foal Sale. She is the second foal out of a Green Tune half-sister to Group 1-winning sprinter Marchand D'Or.

"You can see the page and she's a good filly," added Ludt, who attributed the early success of the Phoenix Ladies Syndicate to Pamela Cordina.

"Phoenix Thoroughbreds - which includes the Ladies Syndicate - are trying to play on the international stage and Amer [Abdulaziz, Phoenix Thoroughbreds chief executive] is big on supporting the industry. We'll probably leave her with the trainer she's with, we don't tend to move things around, we don't like to rock the boat too much!"

Earlier in the session Marnane also sold Real Appeal, a two-time winner by Sidestep, to Michael Donohoe of BBA Ireland, who was acting on behalf of YuLong Investments, for £265,000.

"I didn't think he represented bad value at that price," said Donohoe. "He'll definitely run in the Norfolk and fingers crossed he runs well. We bought one horse here last year, Rockin Roy for £70,000, he won three races for us and was stakes placed a couple of times and we thought this horse was in the same mould."

Among the headline offerings who failed to sell was Maven, the Wesley Ward-trained son of American Pharoah who is entered in the Norfolk Stakes, for which he is around 7-1. There was a brief moment of confusion before Nick Nugent brought the gavel down at £725,000, however, when a guest waving to a friend was almost mistaken as a bid.

"Where's security?" quipped Nugent with tongue firmly in cheek once the situation had been resolved.

In a pragmatic end-of-sale statement, Goffs group chief executive Henry Beeby said: "The sixth Goffs London Sale in association with Qipco welcomed a truly international audience of buyers to the grounds of Kensington Palace on a superb summer's evening.

"It was a fantastic social occasion to begin Royal Ascot week with some really good business done. Obviously we would have preferred to sell a few more of the horses but with entries at Royal Ascot we view it in an entirely different way, in that if people can achieve a premium at the sale they'll take the money but if not they'll go to Royal Ascot and we'll be cheering those horses on as well. So we are very grateful for all the support and hope everyone enjoyed themselves."

Success across the Channel for Newsells Park's Nathaniel

FIRST PUBLISHED 8:02PM, JUN 17 2019
We looked at the video of his debut, he's an interesting horse and bred to stay and I had a couple of clients who were interested so it's worked out