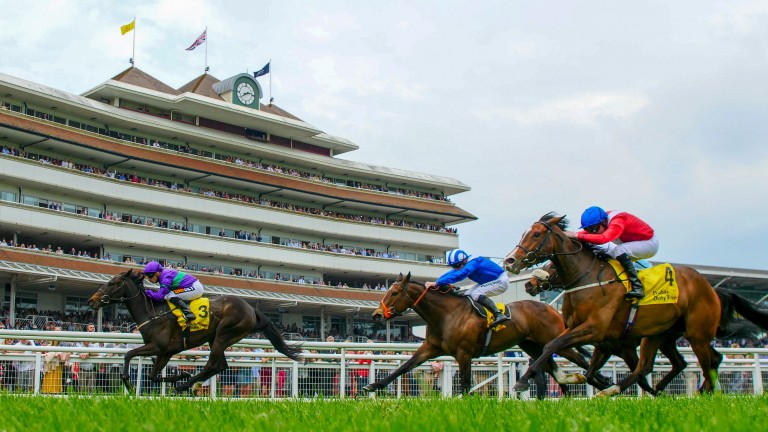 Dan's Dream runs out a cosy winner of the Dubai Duty Free Stakes at Newbury on Saturday
Mark Cranham
1 of 1
By Zoe Vicarage 4:35PM, APR 21 2018

The filly came into the race having made a winning start to her season at Bath last month and was kept handy as the pace was set by the leaders.

With Gavota and Tajaanus trying to lay down their challenge in the final stages, jockey Silvestre De Sousa got a tune out of Dan's Dream that saw her quicken and win by one and a quarter lengths.

Hunscote Stud bred Dan's Dream out of the unraced Royal Applause mare Royal Ffanci, who is from the family of another winner of the Fred Darling Stakes in Penkenna Princess, who has since been exported to Japan where she has produced the Listed-winning Stay Gold horse Tricolore Bleu.

A homebred for Khalid Abdullah, Cityscape was trained by Roger Charlton to win six races including the Joel Stakes, Solonoway Stakes, Prix Perth and the Group 1 Dubai Duty Free.

Retired to Overbury Stud for the 2014 breeding season where he stood at an introductory fee of £5,000, he covered a first book of 96 mares.

The son of Selkirk is also the sire of the Group 3-placed Licisca and the Listed-placed trio Ballymount, Freescape and The Broghie Man. He is standing at a fee of £4,500 this season.

FIRST PUBLISHED 4:35PM, APR 21 2018
Royal Ffanci is from the family of another winner of the Fred Darling Stakes in Penkenna Princess