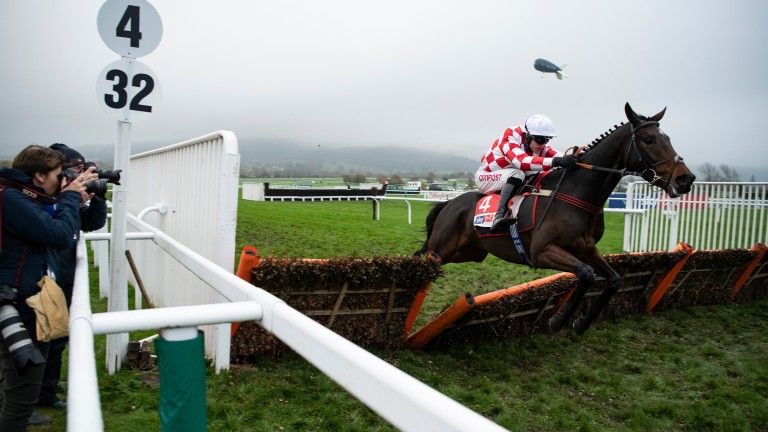 Hang In There clears the last at Cheltenham earlier this season
Edward Whitaker
1 of 1
By Tom Peacock 6:16PM, JAN 3 2020

The tale of an Italian showjumper who bought himself a farm in County Kilkenny ought really to be a bar room joke which finishes with some cringingly cheesy punchline.

Daniel Furini, in fact, is entirely serious in his mission to breed National Hunt horses, so much so that last spring he relocated permanently with his wife Daniela in order to have a hands-on interest.

His name has been an incongruous one on the form of a handful of individuals seen racing in Ireland already with the most notable example being Hang In There, who bids to complete a hat-trick of wins in Saturday’s Unibet Tolworth Novices' Hurdle at Sandown.

To explain quite how Furini got to this point requires stepping back 14 years or so.

"It’s quite a long story," he says apologetically after a pause. "I started to breed in Normandy, first for the showjumping.

"A good friend of mine that’s a very good breeder of showjumpers, he loves also to breed thoroughbreds, and in my heart I did too.

"I bought my first broodmare in Deauville in around 2005 and after that I decided to cover my Linamix mare with King’s Theatre. 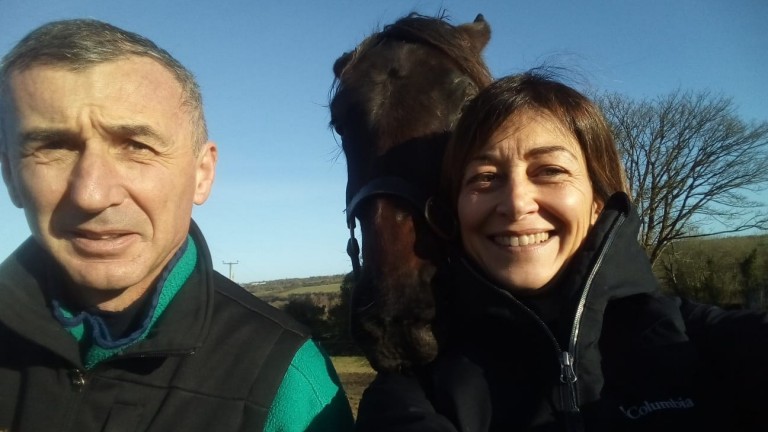 Daniel and Daniela Furini with one of Hang In There's brothers
"The first time I came to Ireland I went to Ballylinch to take a look at King’s Theatre, and after that I started to board them in a little farm beside Ballylinch.

"I think I probably like it because it’s a mix between the thoroughbred and the showjumping, and again, if you’re honest, at the bottom National Hunt is more affordable. The Flat, if you want to do proper things, you have to have deep pockets."

He continues: "Time went on, and here we are. I love horses in general, I got the bug I would say 35 years ago, maybe more, and my wife too because she was an eventer at international level.

"In Ireland I know very, very good people but it’s a lifetime, more or less, that my wife and I have been involved with horses, so for different reasons we decided to do it personally."

Hang In There appeared at the time Furini was operating by proxy from Italy. By Yeats out of a winning French hurdler named Jaldemosa, he was withdrawn from the 2017 Derby Sale and, on the advice of Nicky Teehan of Bluegate Stud, who had been prepping the youngster, he was sent to Mags Mullins.

Following a couple of sighters in bumpers, he carried Furini's silks to a much more respectable second in a hurdle at Fairyhouse last Easter, subsequently gathering £60,000 at the Tattersalls Ireland Cheltenham May Sale. For Emma Lavelle, Andrew Gemmell and Tim Syder, he has already landed the Grade 2 Supreme Trial and could still be improving.

"Logical Song, a three-quarter brother of Hang In There, won the Cork Grand National in an outstanding fashion, and, with me, all the products of Jaldemosa are winners. Every one at their level, but they won!

"I was very impressed when Hang In There was second at Fairyhouse in a big field of good horses, because he was a green horse and that day he showed that he was decent. After that, Mrs Lavelle has been doing a very good job with him."

Jaldemosa has moved to her new home with the couple and, now 20, she is in foal to Kingston Hill.

"It’s a very little operation; I have four broodmares," he explains. "I've been here only eight months - at this time, it’s better for me to work on the quality instead of the numbers.

"I actually have two full-brothers of Hang In There - one is now four and the other is two. 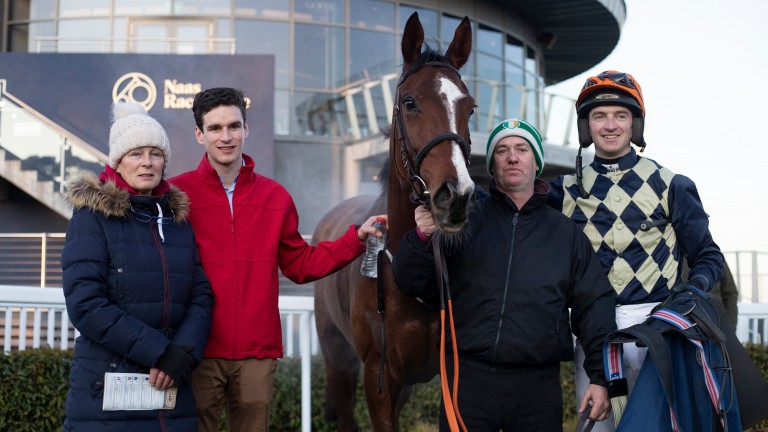 "We were very unlucky, the four-year-old got cast in his box the night before the Derby Sale, so now he’s in pre-training, He looks like a decent horse, so we’ll see.

"Two weeks ago a Getaway filly called Lady Temperance won a bumper at Naas, she’s the first product of a broodmare I have so it’s a good start, but with horses you never know. Horses make the men liars!"

Furini is well aware that he must resemble something of a curiosity among the farming folk of Kilkenny, yet his professional reasoning is sound. And even as a former resident of Emilia Romagna, producer of perhaps unparalleled gastronomic delicacies, he is charitable when pressed about the standard of the local cuisine.

"With the food in Italy there’s no comparison…but honestly, it’s not too bad," he says.

"The region where we lived, in the north-east near Bologna and Ravenna, it’s not very important for thoroughbreds. There are a lot of farms for the trotting, which I don’t like, and for the thoroughbreds you have to go to Milan or Rome.

"An Italian man that moved to Ireland!" he wonders aloud with a laugh.

"But plenty of good trainers in Italy are moving to France now because they can’t survive in Italy. I don’t know for what reason, but in Italy there isn’t the interest in horses. It’s a very very niche market.

"It was a logical decision to move to a nation that is more involved with the horse. It was our dream, so we decided to do it."

Jimmy Mangan's racing success not confined to the role of trainer

From the sad to the strange: six surprising stories in bloodstock in 2019

FIRST PUBLISHED 6:15PM, JAN 3 2020
At this time, it's better for me to work on the quality instead of the numbers