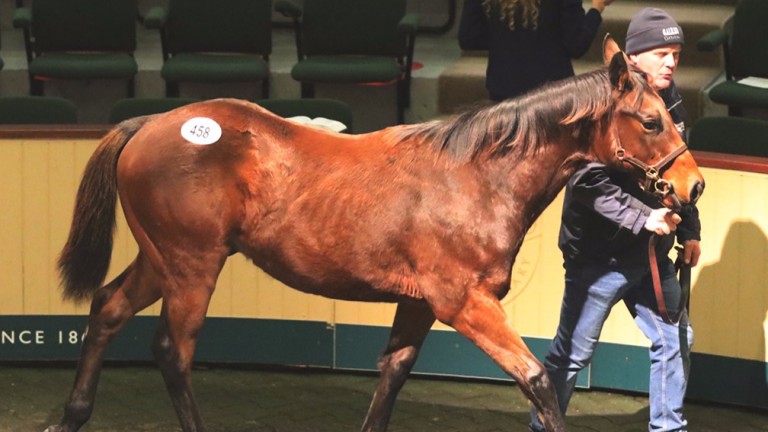 The Goffs November Foal Sale exploded into life on Monday with the sale of a gorgeous colt by Dandy Man providing the late evening fireworks on the second day of the auction.

The colt set the ring ablaze as the session drew to a conclusion, with his price rocketing ever higher until the hammer came down at €85,000. Paul McCartan bought the foal consigned by Glenspring Farm in Tipperary and out of the winning Celtic Swing mare Celtic Lynn. He is her third foal and half-brother to a winning daughter of Clodovil.

"He's a lovely colt by a stallion I like and think is on the upgrade. He will come back next year for resale," said McCartan.

Dandy Man's progeny were hot property on Monday with three of the nine foals to make at least €30,000 sons of the Ballyhane Stud stallion. Joe Foley's County Carlow farm dominated the session with five of those nine foals by its stallions, including a colt from the first crop of Battle Of Marengo, who completed a productive day for Glenspring Stud as they also consigned the grandson of Galileo, who was bought by JC Bloodstock for €30,000.

A son of Ballyhane's first-season sire Elzaam held sway for much of the second half of the session. Tally-Ho Stud were pushed to €41,000 to secure the colt out the winning three-year-old So Blissful, a daughter of Cape Cross.

"He was the nicest foal here today and we had to pay a bit more than we thought to get him. He will be offered for resale either next year or at the breeze-up sales in 2018," said Tony O'Callaghan.

Clem Fandango has showcased the talents of her sire, who is by the Australian champion Redoute's Choice, with a Listed win and placed finishes in both the Group 2 Queen Mary Stakes at Royal Ascot and the Group 3 Cornwallis Stakes. The sucesss of Elzaam's early runners was reflected in the sales of his foals on Monday, with seven lots by the grandson of Danehill, conceived on a fee of €3,500, selling for an average of €16,685.

Fine and Dandy for Lynn Lodge

Eddie O'Leary of Lynn Lodge stood paid €40,000 for another foal by Dandy Man, a bay colt who is the third foal of Titian Queen, a half-sister to Group 1 Prix de la Foret winner Toylsome who was pinhooked by O'Leary as a foal.

"He's a nice colt by a very good young stallion. It has been a lucky family for us and I hope this colt can continue that, he will be back for resale," said O'Leary.

The third of the Dandy Man colts to make over €30,000 was consigned by Barrettstown Farm House for owner John L Doyle. Dansili's increasing prowess as a broodmare sire is becoming more widely documented and this brown colt is out of Air Maze, a winning daughter of the Juddmonte stallion.

Honours among the first-crop sires went to Shadwell's Mukhadram who was responsible for a €38,000 colt. Consigned by Ballincurrig House Stud, who enjoyed an enormously successful National Hunt Foal Sale at Tattersalls Ireland last week, the colt was offered on behalf of Blackberry Road Stud and is out of an unraced Oasis Dream mare Chalet Girl.

From the further family of multiple Graded stakes winner Swingtime, the fine bay son of the Eclipse winner, who stands at Nunnery Stud for £7,000, was knocked down to Brendan Boyle Bloodstock.

Tara Stud's Alhebayeb, a son of Dark Angel, was another first-crop stallion to attract buyers' attentions. The most expensive of his foals to sell during Monday was a colt purchased by Cooneen Stud. He is the third foal out of the unraced Motivator mare Mokama, a daughter of Listed winner Carambola, herself a Danehill half-sister to Irish 1,000 Guineas winner Matiya, who was also runner-up in the 1,000 Guineas and third in both the Group 1 Prix de Diane Hermes and the Fillies' Mile.

"He's a very nice horse," said Maura O'Sullivan of buyers Cooneen Stud, "He's a really good physical specimen, correct and a good walker. We will offer him for resale as a yearling, he was a bit expensive for a pinhook so hopefully he will develop into a nice yearling."

A son of Gale Force Ten lead proceedings for the opening half of the session when realising €34,000. The colt is from the first crop of the Irish National Stud sire who won the Group 3 Jersey Stakes and was consigned by Ardreigh stud. The bay colt is out of the winning Redback mare Fancy Feathers and he is a half-brother to two winners.

Jim McCartan of MC Bloodstock bought the March-born colt, who is from the family of Pallasator, and said of him: "He's a very nice colt and the plan is to offer him for resale as a yearling. I thought that was roughly what we were going to have to pay for him. Gale Force Ten is a very nice Oasis Dream horse and I remember him selling as a yearling and liking him then."