Aisling Crowe reports from the second session of the February Sale 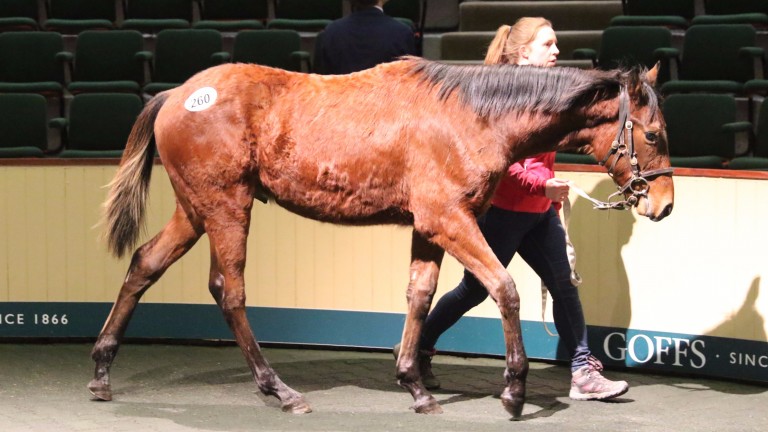 The second session of the Goffs February Sale on Wednesday was crowned by a top lot whose young life could have been scripted by a Hollywood screenwriter, such has been the adversity he and his dam have survived.

The colt is an April-born son of the popular Dandy Man and the first foal of Sharki, a daughter of Indian Ridge who gave birth to him aged 11.

Her late start to motherhood was due to her living in a field with other horses until her owner gave her to his friends, Ciara and Austin Lyons of Collegelands Stud near Summerhill, County Meath.

That is when the drama began.

Ciara Lyons takes up the story: “Unfortunately she developed selenium poisoning from grass - it can happen when the grass has to grow deeper into the soil to get nutrients after poor weather, and it caused her hooves to fall off.

"We didn’t know what it was - neither did the vets or farriers until one farrier saw her and recognised the symptoms.”

The mare was in foal to Ballyhane Stud’s popular son of Mozart and she has spent 18 months in her box while receiving treatment for her illness and carrying her foal. Thankfully her hooves have grown back but the toll of her life-threatening illness on her and her foal was severe.

“Luckily she's such a good-natured, kind mare that she was able to be on box rest and treated for the poisoning but she was so ill and so was the foal when he was born, he nearly died,” Ciara said. “We nursed him for a long time and luckily they both pulled through.”

Peter Doyle, who flew into Ireland on Wednesday morning, saw off all other bidders when securing the colt for €86,000.

“I saw Peter walking through the gate this morning and he told me that he had just arrived from South Africa and had been told about our Dandy Man colt,” said the thrilled breeder.

Tally-Ho Stud is the home of another stallion buyers cannot get enough of and the thirst for Kodiac’s progeny is unquenchable, with three of the stallion’s offerings among the six most expensive yearlings on Wednesday.

The County Westmeath operation purchased Kodiac’s most expensive weanling on the day, a €72,000 colt from one of the best American families around, that of Belmont Stakes winners Rags To Riches and Jazil. The bay is the first foal out of the Tiznow mare Tiz All Over and was offered by Cashel Bloodstock.

Mags O’Toole bought another Kodiac from the same family, paying €42,000 for a brother to winning two-year-old Sir Roger Moore out of the Elusive Quality mare Truly Magnificent.

Tiz All Over and Truly Magnificent are half-sisters out of A.P. Indy's unraced daughter Magnificent Honour, herself a sister to Rags To Riches.

Kodiac was also the sire of Wednesday’s most expensive filly, with Troy Steve paying €52,000 for a daughter out of the winning Green Desert mare Green Oasis.

“It's a proper pedigree,” said Steve. “I bought her for Piermill Bloodstock, who are based near Cambridge, and they will have seven yearlings for the various sales in the autumn, including this one.”

It concluded a busy few minutes for Steve, who three lots previously signed for a €38,000 daughter of Acclamation consigned by Yellowford Farm, out of the Listed-placed Glitter Baby from the family of Group 1 winners Designs On Rome and Grey Swallow and Grade 2 American Derby winner Simple Exchange.

The only weanling catalogued by New Approach was bought by Richard Fitzsimons of BBA Ireland for €60,000 on behalf of a new client who will offer him for resale at one of the autumn’s yearling sales. Consigned by Airlie Stud on behalf of his breeder Maria Niarchos, the bay colt hails from a wonderful Niarchos family pedigree, with Domedriver, El Gran Senor and Try My Best all on his page.

For much of the day, the honour of most expensive filly of the session rested on a daughter of Ballylinch Stud’s Classic-winning sire Lawman.

Peter Kavanagh bought the grey filly, the first foal of her dam, for €40,000 and it was the mix of Lawman and Linamix in her genes that drew his attention.

“Lawman’s fillies are excellent and some of his best performers have been out of mares by Linamix, such as Most Improved, so it is a good cross.

"This filly’s second dam is by Linamix and we had success with him as a stallion. I like to see the Linamix grey coming through in her coat and she has a lovely page with her dam being a half-sister to a Classic winner. We like to race fillies so we could keep this one to race.”

The striking filly is out of Blue Moonstone, a half-sister to 1,000 Guineas and Irish Oaks winner Blue Bunting.