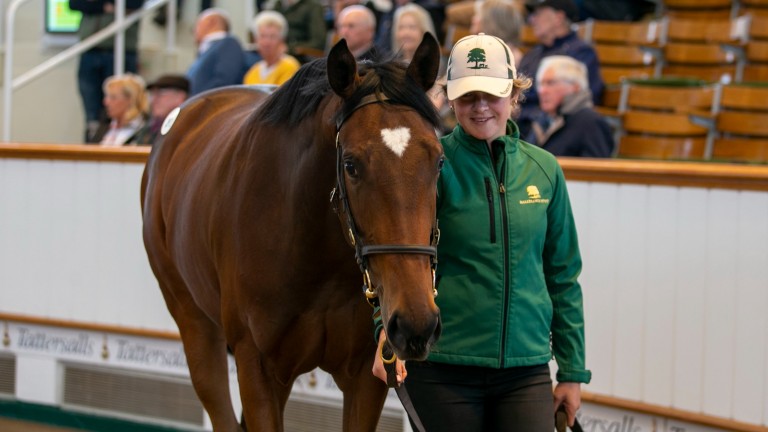 The Kingman filly out of Traffic Jam in the ring at Park Paddocks on Wednesday
Laura Green
1 of 1
By Sales Correspondent James Thomas UPDATED 7:34PM, OCT 5 2022

Shadwell, who made their first public purchase in Europe for close to two years on Tuesday, re-entered the fray on Wednesday when going to 1,050,000gns for the Kingman filly out of Traffic Jam offered by Ballylinch Stud at Book 1 of the Tattersalls October Sale.

The March foal boasted arguably the biggest update in the catalogue as she is a half-sister to Place Du Carrousel, who was listed as having won the Group 3 Prix Cleopatre but added the Group 1 Prix de l'Opera to her record at Longchamp on Sunday as her sibling was being paraded for prospective purchasers at Park Paddocks.

“Damn that Group 1 update!” joked Shadwell’s racing manager Angus Gold. “I thought she’d make 700,000gns to 800,000gns going into yesterday but it sounded like everyone was on her so we had to pay a bit more.

“Sheikha Hissa really liked her the minute she saw her so she was very keen to buy her. We’re looking for some fillies with a pedigree and she’s a big, scopey filly, a beautiful mover who showed herself really well in the ring here, and she’s by a very good stallion too.”

The filly was bred by Ballylinch Stud, Alexis and Fan Adamian from Traffic Jam, who won the Group 2 Prix du Conseil de Paris during her racing career. The daughter of Duke Of Marmalade hails from the family of Hoity Toity, meaning the likes of Lillie Langtry and her Group 1-winning offspring Minding, Tuesday and Empress Josephine appear back on the page.

That purchase took Shadwell’s Book 1 spend to 1,930,000gns after the operation secured the Siyouni filly out of Lah Ti Dar for 880,000gns on day one. The talent search sees Shadwell return to familiar territory as a leading buyer, having spent much of the last 12 months offloading stock after the decision was taken to reduce numbers following the death of the operation’s founder, Hamdan Al Maktoum. 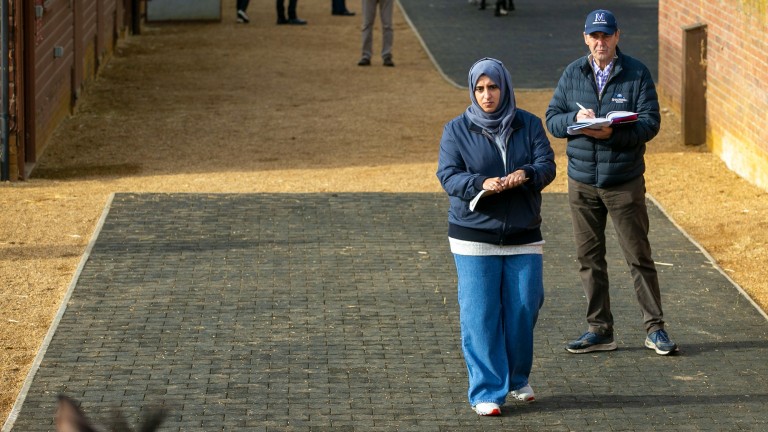 “Last year was pretty traumatic for everybody as you don’t like to sell all those nice horses, particularly the mares who’ve been there for a long time,” said Gold. “But we had to do what we had to do and obviously the family wanted to reduce numbers, and understandably as it was quite a big undertaking anyway. It was Sheikh Hamdan who had the knowledge of a lot of it but for the family it had to be a smaller operation.”

Gold pointed to the role that high achievers such as Baaeed, Hukum, Minzaal and, most recently, Anmaat have played in shifting Shadwell’s focus back toward future success now that Sheikh Hamdan’s daughter, Sheikha Hissa, is at the helm.

“We’ve been blessed with a fantastic year, and not just Baaeed but some of the lesser horses have come to the fore too, which is great,” he said.

“It’s been a joy this year and, for me, the real fun is having Sheikha Hissa enjoy it so much, and hopefully her family as well. I think Baaeed has been a real fillip to all of them, particularly the brothers and sisters for whom racing might not be their biggest love in the world. To have a horse as good as that has given them a lot of pleasure.”

Shadwell had ten lots entered in this year’s Book 1 but all bar three have been withdrawn, and Gold said he expects “the guts of 50” homebreds to head into training ahead of next year.

“It’s going to be quiet for a couple of years while we rebuild, we know that, and obviously we’ll miss some of the better horses next year, but we’ve just got to work our way back up and hope there’s still the odd good one,” he said.

First foals to watch out for on Thursday

FIRST PUBLISHED 5:57PM, OCT 5 2022
Sheikha Hissa really liked her the minute she saw her so she was very keen to buy her