Second time that Vezina has been bought by Jeremy Brummitt 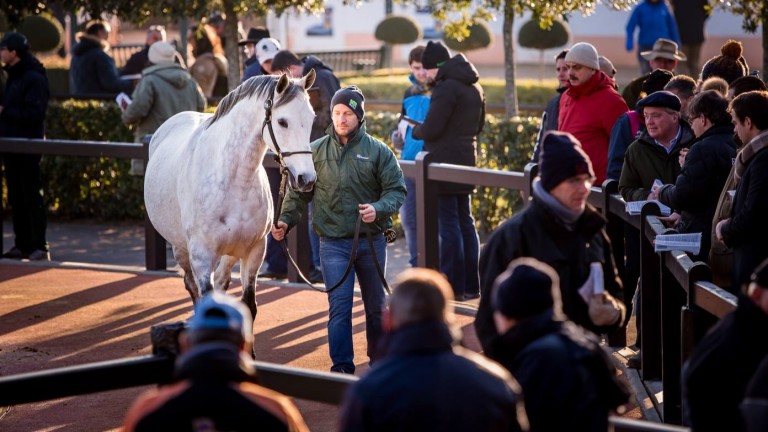 Arqana: a lot walks in the pre-parade ring at the Deauville sales complex
Zuzanna Lupa
1 of 1
By Isabel Mathew 12:08PM, DEC 5 2016

Offered from Coulonces Consignment, the 16-year-old mare was knocked down to Seven Hills Bloodstock in foal to Kendargent.

“She’s been purchased for a partnership with some good friends,” explained Brummitt. “The plan is to send her back to Holy Roman Emperor next year.”

Brummitt knows Vezina well as at this sale in 2012, just a month after Morandi’s win in the Criterium, which had followed on from a success in the Group 3 Prix de Conde, he had gone to €260,000 for the daughter of Bering.

From the immediate family of Group 2 winner and Nassau Stakes runner-up Ana Marie, she foaled a colt by Kendargent this year.

“I originally bought her for Bjorn Nielsen, but he has decided to rearrange his breeding interests a little,” added Brummitt. “However, as we really like the mare, we decided to buy her for this new partnership with a view to the long-term.”

One of the best pedigrees on offer on the day went the way of a new French association of buyers after winning mare Melbourne Shuffle from Haras d'Etreham was knocked down to Earl Carel for €100,000.

The four-year-old daughter of Street Cry is out of a sister to Listen and Sequoyah, and a half-sister to this year’s Listed-placed juvenile Pichola Dance. “

“She’s been bought for a few trotting partners that have decided to invest in thoroughbreds,” Victor Langlais, who signed the docket, said of the mare who is in foal to Siyouni.

“We already work together with Henri Bozo and Lady O’Reilly, and decided that it would be interesting to get into this market. She’s a nice mare that is not overly big, but walks well.”

At the same price, Pierre Talvard of Haras du Cadran bought the winning Distorted Humor mare Comique for €100,000 under agent Alain Decrion just a few lots from the end.

Following on from his purchase of Reponds Moi on Saturday, the eight-year-old also came from the Wertheimer brothers’ consignment.

“There isn’t much to say, apart from that I just really liked the mare,” said Talvard. “She's been bought together with a bunch of friends.”

Out of the Grade 1 Beverly Hills Handicap winning El Gran Senor mare Corrazona, Comique is a sister to Listed winner Dac and a half-sister to Grade 3 winner Olmodavor from the family of Thirty Six Red.

Later on in the day Matt Houldsworth of Howson and Houldsworth Bloodstock went to €83,000 for Listed winner Kirkinola in foal to Lope de Vega.

Consigned by Dehesa de Milagro, the 11-year-old is out of Cherry Hinton Stakes winner Spinola and is a half-sister to stakes-placed Navel Orange and Lady Dragon from the family of Cherokee Rose.

“She’s been bought for an existing client - the same one we purchased Peace Palace for [cost €95,000] on Saturday,” Houldsworth said. “She’s a quality mare, and of course we also really like Lope de Vega."

The daughter of Selkirk has already bred a winner as well as Bienteveo, who was placed as a three-year-old this year.
Grassick goes West

Just a few lots later, this season’s dual-winning filly Westadora was knocked down to Cathy Grassick on behalf of an Irish partnership of existing clients for €80,000.

Another to come from Anna Drion’s Coulonces Consignment, the Le Havre filly is the first foal out of the unraced Montjeu mare Stranded from a family that goes back to Zambezi Sun.

Her half-brother by Showcasing had made €48,000 at the Arqana October Yearling Sale.

“She had the best physical of anything here today,” Grassick said.

“We'll put her back in training, most likely in France, and then hopefully she'll make a nice broodmare afterwards. She’s also a good outcross for Danzig. We liked her half-brother when he went through the sale.”

Bred and owned by the Drions, Westadora won her latest start at Clairefontaine for Jean-Claude Rouget in August, having also taken a race on the all-weather earlier in the season.

The most expensive foal purchase of the day came for the only offering by New Approach in the catalogue, bought by Charlie Vigors under Hillwood Bloodstock for €80,000.

Knocked down to Merrick Francis for an absent Vigors, the January-born colt is the second foal out of the Rail Link mare Awe Struck, a three-parts sister to Matron Stakes winner Emulous.

“I saw him on Saturday and he was the pick of the foals today,” Vigors said over the phone. “I thought he would make in the region of that price as he’s a lovely colt. The plan is to re-sell him next year.”

Earlier in the day, a colt by Kendargent had also proved popular, when selling to JK Thoroughbreds for €52,000.

Already named Snow D’Argent, the April-born foal is out of winning Xaar mare Makisarde and a brother to Listed winner Snow Bell from the family of Cadeau For Maggi. He was offered from La Motteraye consignment.

Final figures showed a tricky day’s trading overall with a significant decrease in the clearance rate in comparison to last year’s auction at just over 71 per cent.

FIRST PUBLISHED 8:45PM, DEC 4 2016
She's been purchased for a partnership with some good friends