Dabirsim in demand with Deauville buyers 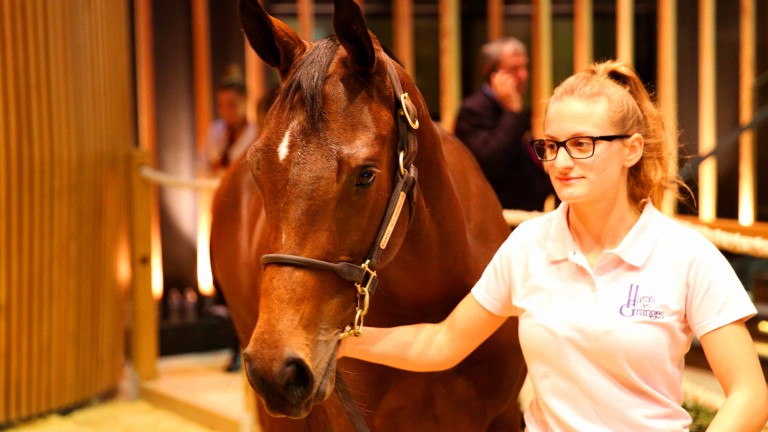 After two days of selling dominated by a broad range of stallions, the Arqana ring fell hard for the progeny of Dabirsim during Thursday's session of the October Yearling Sale.

No fewer than four of the top ten lots to change hands were by the son of Hat Trick, with the strong possibility that all could be headed for next spring’s breeze-up sales.

Trade was led by a Dabirsim filly knocked down to Mocklershill Stud's Willie Browne for €105,000, a substantial reward for Haras des Granges, who chose to buy her back as a foal when the bidding reached only €16,000 at last December’s breeding stock sale.

"Obviously we like the sire but we were mad about the filly," said Browne. "We've been waiting for her all day and were rushing to get a plane but we had to have her before we left. We didn't think we'd have to give quite so much but I think she’s a beautiful filly, and the sire speaks for himself.

"She’ll come back here. She is very correct and she will get stronger. She’s the real deal I think, or at least I hope she is!"

The stampede for yearlings by Dabirsim also included a €72,000 filly from Haras du Taillis sold to Rabbah Bloodstock and a €75,000 colt consigned by Haras de Grandcamp, who went the way of Con Marnane, whose filly Different League has done so much to establish Dabirsim’s burgeoning reputation.

Marnane also has history with the other side of the pedigree, having bought a prolific winning half-brother to the dam.

"I know the family very well and I bought King David,” said Marnane. "The stallion has been a revelation for me. He will probably come back to a breeze-up sale next year and he was probably the nicest horse today”

Morna MacDowall will also have a Dabirsim to go to war with in May, having won out at €62,000 for a colt consigned by the Haras de Fresnay-le-Buffard.

MacDowall’s eye and feel for the horse underneath her made her an invaluable member of the team at Grove Stud and she is now building a name for her own boutique operation.

Summing up much of the market’s sentiment for Dabirsim, she said of the colt: “He’s a big strong horse, the sire is hot and I wanted to buy one. I couldn’t get near anything yesterday.

“He will come back to breeze at Arqana next May. I bought him on my own account in partnership with an American client.”

There was, however, some variety at the top of the market, with another French-based stallion, Haras de Colleville’s Kendargent, securing second-top billing when the final offering of the day - a colt out of a Listed-placed Galileo mare hailing from Haras d’Ommeel - went to Federico Barberini for €95,000.

Jean-Claude Rouget also got his name on the score sheet when striking at €90,000 for a Pedro The Great colt.

The sale marked a real coup for Elevage du Davier, who only consigned two lots for the week and who utilised the son of Henrythenavigator, who stands at Haras de la Haie Neuve for a fee of €3,000.

Davier’s Alain Clavier won the nomination to Pedro The Great in a raffle organised by ASSELCO, the French Breeders’ Association.

Turnover for the first three days of selling at Arqana is already in excess of €300,000 ahead of last year’s final total, for almost 70 lots fewer through the ring.

Thursday’s key indicators were all up on the same day in 2016, with a clearance rate above 81 per cent.

FIRST PUBLISHED 8:04PM, OCT 19 2017
Obviously we like the sire but we were mad about the filly