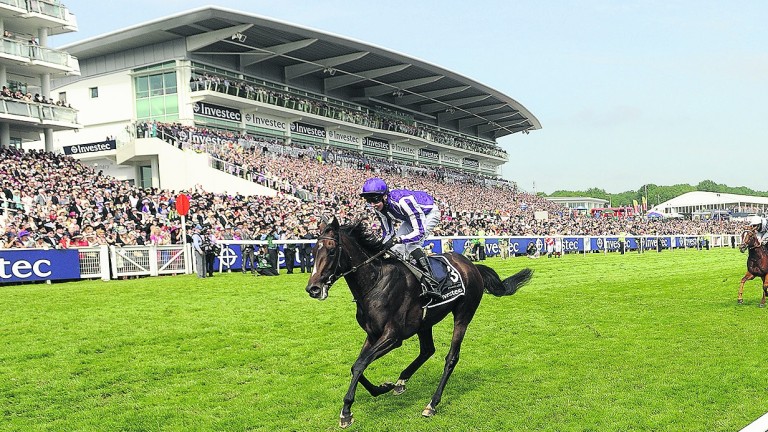 With the fifth anniversary of his Derby success imminent, Camelot opens a new chapter in his career at Leicester on Tuesday when Fighting Irish becomes the first runner from his debut crop.

The triple Classic winner's first yearlings were warmly received at the sales but the son of Montjeu, having excelled over distances from a mile to 1m4f, will not necessarily be expected to show his full hand until later in the season.

That is not to deny the chances of Fighting Irish over 6f, as there is plenty of speed in his pedigree. He is the fourth foal out of the unraced Pivotal mare Quixotic and a half-brother to 5f two-year-old winner Well Done. Quixotic herself, culled by Cheveley Park for 105,000gns at the 2010 Tattersalls December Sale, is a sister to Lockinge hero Virtual as well as being a three-parts sister to Coventry Stakes winner Iceman.

Bred by Kilcarn Stud, Fighting Irish was sold for €50,000 to Whatton Manor Stud at the Goffs November Foal Sale in 2015. Reoffered as a yearling at last year's Goffs UK Premier Sale, he was bought by Stroud Coleman for £70,000 and sent to Harry Dunlop.

"He's a nice horse and he did a barrier trial at Lingfield the other day," Dunlop said. "He's got quite a lot of speed in his family and when he came from Doncaster he was quite a bucky type.

"It was slightly odd for a Camelot as you would think he might be a slightly later-on type but he's shown speed himself. I'm hopeful for a nice sort of introduction. It's a very hot race but I'm looking forward to running him really. He looks more of a two-year-old and certainly more precocious than I imagined."

Camelot has plenty of well-bred runners in the pipeline including a colt from the family of Prix du Jockey Club scorer New Bay bought by MV Magnier, Mayfair Speculators and Peter and Ross Doyle for 400,000gns at Book 1 of the Tattersalls October Yearling Sale last year.

Camelot's early success at the sales saw Coolmore raise his fee for the current covering season from €25,000 to €35,000.

FIRST PUBLISHED 4:05PM, MAY 29 2017
It was slightly odd for a Camelot as you would think he might be a slightly later-on type but he's shown speed himself