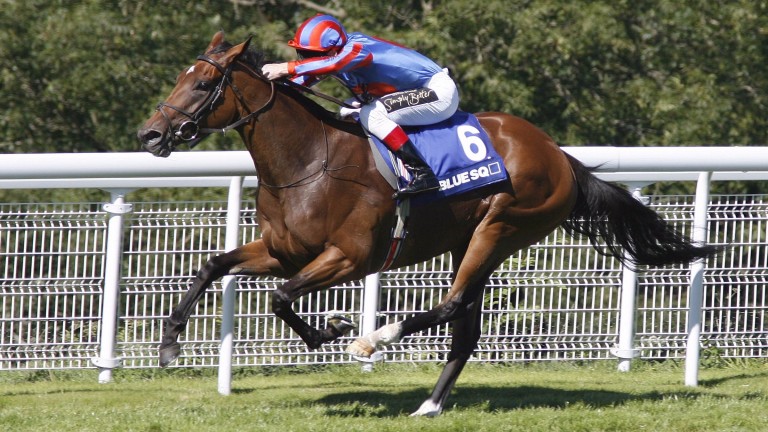 The best of international breeding is on show at the Curragh on Saturday, with close relations to European Group 1 winners by leading US sire War Front and Japanese breed-shaper Deep Impact set to make their debuts.

Wisconsin, who is unleashed by trainer Aidan O'Brien in the 1m2f maiden at 4.30, makes particularly mouthwatering appeal on pedigree.

The three-year-old colt is by Shadai Stallion Station sire Deep Impact, who has supplied 29 top-level winners and has proved effective in Europe with the likes of A Shin Hikari and Beauty Parlour.

He is out of Peeping Fawn, a daughter of Danehill who finished third in the Irish 1,000 Guineas, second in the Oaks and then embarked on a winning spree that took in four Group 1s – the Pretty Polly Stakes, Irish Oaks, Nassau Stakes and Yorkshire Oaks.

She is a half-sister to Criterium International winner Thewayyouare out of Fillies' Mile second Maryinsky, a half-sister to ace US broodmare Better Than Honour, the dam of Belmont Stakes winners Jazil and Rags To Riches.

War Ensign, set to make his debut for O'Brien in the 6f two-year-old maiden at the Curragh (2.45), illustrates the high calibre of mares with which Coolmore is supporting successful Claiborne Farm stallion War Front.

He is a half-brother to Moonlight Cloud, a brilliant racemare who won six Group 1 races including three renewals of the Prix Maurice de Gheest and who just failed to catch Black Caviar when second in the Diamond Jubilee Stakes.

War Ensign and Moonlight Cloud are out of the Listed-placed Spectrum mare Ventura, bought by Coolmore for 900,000gns after the emergence of her superstar daughter.

War Front is also sire of the likely favourite for the race, US Navy Flag, a son of four-time Group 1 winner Misty For Me who was fourth on debut at Naas. US Navy Flag is a brother to last year's Cheveley Park Stakes second Roly Poly.

New Terms is trained by Jim Bolger for Godolphin and is by Bolger's Derby hero New Approach.

She is out of Favourable Terms, a daughter of Selkirk who struck at the highest level in the Nassau Stakes and finished second in two Group 2s – the Windsor Forest Stakes and Matron Stakes.

There are also some brilliantly bred horses making their debuts in Britain on Saturday.

Razzmatazz, set to run for Clive Cox in a 6f maiden at Nottingham (2.05), is a three-year-old Monsieur Bond sister to 2014 Prix de l'Abbaye hero Move In Time. She cost only 30,000gns as a yearling.

Zabaletaswansong, trained by Richard Hannon for Middleham Park Racing, is the first runner in Britain or Ireland for first-season sire Maxios, a son of Monsun who won the Prix d'Ispahan and Prix du Moulin. The €38,000 BBAG yearling buy is entered in a 5f novice stakes at Ascot (4.35).

Yaraki, a Lael Stables homebred trained by William Haggas, goes for the 6f three-year-old fillies' maiden at Lingfield (5.20). The first-crop Frankel filly is out of blisteringly fast two-year-old Superstar Leo, who won the Norfolk Stakes, Weatherbys Super Sprint and Flying Childers Stakes and finished second to Namid in the Prix de l'Abbaye at two. Superstar Leo is also the dam of Molecomb Stakes winner Enticing and Jersey Stakes second Sentaril.

Infamous Lawman, trained by Brian Ellison, is by Lawman out of Lowther Stakes winner Infamous Angel. He takes on the once-raced Afaak, a son of Oasis Dream and 1,000 Guineas heroine Ghanaati, in the mile maiden at Thirsk (8.15).