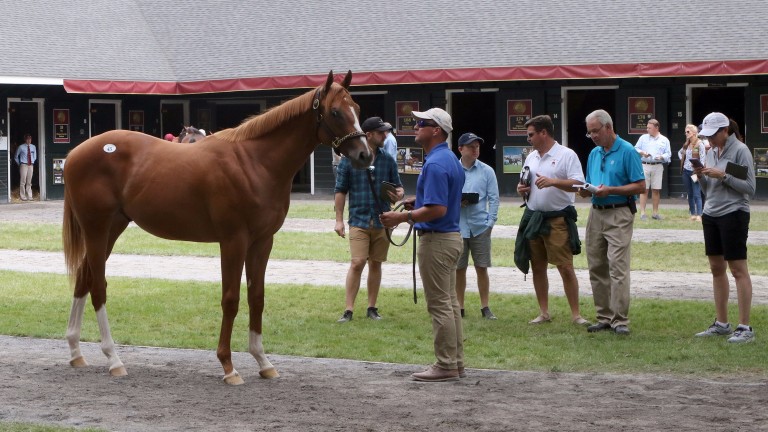 The Curlin colt session-topper who was bought by Ian Brennan on behalf of Eric Fein
Fasig-Tipton Photos
1 of 1
By Ron Mitchell of Blood-Horse UPDATED 11:25AM, AUG 8 2017

There was a feel-good buzz on the sale grounds coming into the Fasig-Tipton Saratoga selected yearling sale, and the opening session on Monday did not disappoint, with across the board gains in key statistical categories and a decline in the buy-back rate.

The numbers pleased Fasig-Tipton president Boyd Browning, who noted the results spoke to the quality of the horses presented to the buying public.

"We felt good coming into the sale. There was a lot of interest on the sale grounds leading up to the sale tonight, and that was reflected in the bidding and the activity that took place," Browning said. "Average up, median up, RNA rate down. It's kind of the trifecta you hope for from a sales perspective.

"We're very pleased at the halfway point of the sale."

The two-day auction concludes on Tuesday in Saratoga Springs.

Mark Taylor of Taylor Made Sales Agency concurred, noting that the few horses that did not sell would likely find new homes on Tuesday.

"It's been a great night," Taylor said. "Good horses that pass the vet are selling for a lot of money."

As usual, the nighttime auction had a party atmosphere in the outside dining area until a downpour sent the large crowd scrambling into the Humphrey S. Finney pavilion.

At about the mid-point of the session, they were treated to some fireworks as the highest and second-highest priced yearlings of the night lit up the bid board in quick succession.

Ian Brennan, who signed the ticket on behalf of Fein, said they were attracted to the colt because of his sire and female family.

"We liked everything about him," said Brennan. "We've had a couple out of the mare, and the mare's really nice. Eric got into the game a little bit with Syndergaard, and he's had some nice horses over the years. He just stepped it up a little bit and is going to try and buy some nice horses. He's very happy to get this colt."

"(There was) nothing not to like about the horse," Craig Bandoroff said. "He's just a big, beautiful horse with a lot of quality, and he's by the right stallion out of a mare that could run. People have to have confidence in who the breeders are and the people who breed good horses. They (yearlings) have to come here fit, they have to be able to stand the pressure, and he did. Every day, he just got into it more and more; once he knew what his job was, he did his job."

One hip prior to the Curlin colt, a son of Medaglia D'Oro was acquired by the partnership of Eclipse Thoroughbred Partners and Mike Repole for $900,000 from the Gainesway consignment.

The colt (Hip 44) was produced from Grade 1 winner Rigoletta, the dam of Battle of Midway, the Affirmed Stakes (G3) winner whose two Grade 1 placings include a third in this year's Grade 1 Kentucky Derby. He was bred in Kentucky by Thor-Bred Stables.

The colt will be trained by Todd Pletcher, who conditions for both Eclipse Thoroughbred Partners and Repole.

"(He's a) beautiful colt, extremely athletic, great scope, great stride," said Aron Wellman, of Eclipse Thoroughbred Partners, who signed the ticket. "Obviously, he's by Medaglia D'Oro, he's out of a mare that was an extremely talented, quality mare. She's thrown a Grade 1-quality foal in Battle of Midway, who was in the classics this year, so he really was the complete package."

Into Mischief colt goes the way of Lael Stable

Late in the session, Roy and Gretchen Jackson, who race as Lael Stable, bought an Into Mischief colt who is a half brother to Graded stakes winners Ami's Holiday and Ami's Mesa for $850,000, third-highest price of the night.

The Ontario-bred colt (Hip 98) was offered by Warrendale Sales as agent for Tall Oaks Farm. His dam, stakes winner Victorious Ami, has four winners and three black-type performers out of five foals to race.

"I liked everything about him," Gretchen Jackson said of the colt who will be trained by Arnaud Delacour. "He's pretty perfect. His conformation is excellent, his walk was athletic, and his pedigree is strong. We loved him."

She said the price exceeded what they thought they would have to pay.

"We go out of control sometimes with this sale," Jackson said. "I hope he'll prove that we were right."

Gainesway was leading consignor, with all nine horses through ring sold for gross receipts of $3.065 million.

FIRST PUBLISHED 10:23AM, AUG 8 2017
We liked everything about him. We've had a couple out of the mare, and the mare's really nice