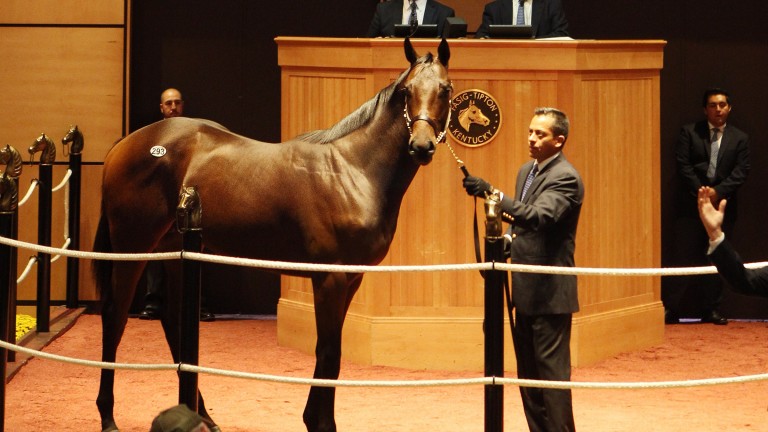 The Curlin colt consigned by Tom VanMeter and Olin Gentry
Fasig-Tipton Photo
1 of 1
By Ron Mitchell of Blood-Horse 2:57PM, NOV 1 2016

Topped by a Curlin colt making his second foray through the sales ring this year, Fasig-Tipton Kentucky's October Yearling Sale got off on a positive note on Monday, with a slight uptick in average price and an improved buy-back rate.

With competitive bidding from a deep buying bench on another splendid fall day in the Bluegrass, Fasig-Tipton reported 246 horses sold for gross receipts of $8,306,400 compared with day one a year ago when 204 were sold for $6,694,300.

The average price of $33,766 was up three per cent over the $32,815 during the first of four sessions a year ago. This year's sale has been trimmed to three days.

"It was a solid start to the sale," said Fasig-Tipton president and chief executive Boyd Browning Jr. "I thought overall it was a very positive day. There was significant competition for what were perceived to be the better offerings."

Unlike the experience at so many of the previous yearling sales this year, there was more trade at the lower price ranges on Monday.

"Probably the most encouraging sign was there was bidding and activity at the lower level," Browning said. "Even at the less-than-$10,000 range there was commerce that was conducted today that was more encouraging than we've seen in the last few years."

Browning said the lower-tiered trades was a key factor in the improvement in the RNA rate but probably brought the average and median prices down a bit.

"At the end of the day we are here to get as many horses sold as we can and it was a very fair marketplace throughout the day," Browning said.

As the final sale of the yearling auction season, the October Sale has grown in stature over the last seven or eight years, with some agents and end-users targeting it and more consignors pointing specific horses at October, Browning said.

The session-topper, at $350,000, had gone unsold at the Fasig-Tipton Saratoga Yearling Sale on a final bid of $275,000 but was brought back to the October Sale by his consignors Tom VanMeter and Olin Gentry.

Purchased by Florida pinhookers Joe Minor and Justin Casse, the colt will be pointed toward a two-year-old in-training sale next year through Ciaran Dunne's Wavertree Stables operation.

Minor, who operates JSM Equine, said he had seen the colt at Saratoga but did not bid on him then.

"We liked him there and liked him better today," Minor said. "I think he's a stunning horse who looks the part. I think he will make a great two-year-old."

VanMeter said the colt had some minor issues when he was at Saratoga, but they were taken care of before Monday's sale and that the final price was well above the reserve.

"We were always hopeful he would sell well and he did," VanMeter said.

The colt was produced from Party Chatter, a 19-year-old daughter of Pleasant Colony who is a sister to stakes winners Colonial US, Silver Fox, and Pleasant Feeling.

Consigned as hip 144 by Brookdale Sales, the Malibu Moon filly was bred in Kentucky by Godolphin out of the Grade 1-winning Unbridled's Song mare Magnificent Song.

Victoria Keith signed the sales receipt on behalf of Fox Hill's agent Tom McGreevy, who selected the filly. Trainer Larry Jones also signed off on the purchase after he saw her.

"She is an excellent physical and has a nice pedigree," said Keith, adding that the purchase price was at "our ceiling."

Keith jokingly noted that Porter was in a buying mood as a result of the success of his champion filly Songbird.

Brookdale Sales' Joe Seitz said he was not surprised with the filly's price.

"She was such a gorgeous individual she looked like a sculpture," Seitz said. "She was in a perfect place and she stuck out. We knew she would sell for significantly higher than the reserve and that was a great price."

The Medaglia D'Oro colt, consigned by Taylor Made Sales Agency on behalf of Blue Heaven Farm, is out of the Grade 1-winning Game Plan mare Mistical Plan.

"He looked the part," said Lieblong, adding that he had seen the races of his half-brother, Big Gray Rocket, a promising Tapit colt trained by Bob Baffert.