Winner Sunny Star was sold by Oaks Farm Stables for 55,000gns in Newmarket 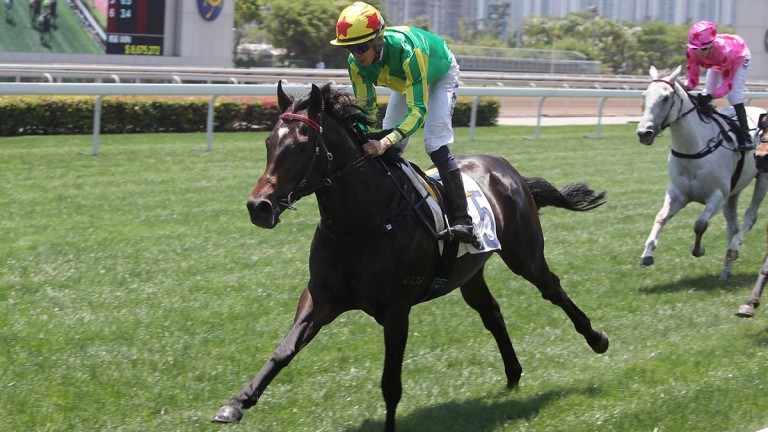 In the week that the postponed Tattersalls Craven Breeze-Up Sale was originally scheduled to take place in Newmarket, there was some cheer for vendors as two graduates from last year's renewal finished first and second in an informative looking race at Sha Tin on Sunday.

Sunny Star won the five-furlong Yau Ma Tai Plate – a Griffin race for non-winning horses imported to Hong Kong unraced – by two and a quarter lengths from the keeping-on Smiling Face despite starting slowly and not getting a clear run under Vincent Ho.

The Francis Lui-trained Sunny Star was bred in the US by Esther De Jong. He is by Flatter and is a half-brother to Grade 3 Kent Stakes winner Golden Brown from the family of French Group 3 scorer Arcadia's Angle.

“I expected he could jump out together with the other horses but he missed the kick a little bit – Vincent said it was because he sat down in the gate,” Lui said.

“It was a weak race and my horse is more mature than the others, his gallops have been very competitive. It’s a good start and I think we’ll stick to the Griffin races for now.”

Originally a $90,000 Keeneland November foal purchase by SW Stable, he was not sold at $40,000 at the Fasig-Tipton Kentucky October Yearling Sale but was purchased by Dwayne Woods for 55,000gns when presented by Mark Dwyer's Oaks Farm Stables at the Craven Breeze-Up last April.

Smiling Face was a €195,000 Goffs November foal purchase by Yeomanstown Stud, and was resold by that operation to Jane Chapple-Hyam for 125,000gns at the Craven Breeze-Up.

Due to government restrictions to slow the spread of the coronavirus pandemic, this year's Craven Breeze-Up Sale has been amalgamated with the Tattersalls Ascot Breeze-Up Sale and pushed back to May 27-29, with a contingency date of June 8-10.

FIRST PUBLISHED 3:00PM, APR 13 2020
I expected he could jump out together with the other horses but he missed the kick a little bit – Vincent said it was because he sat down in the gate