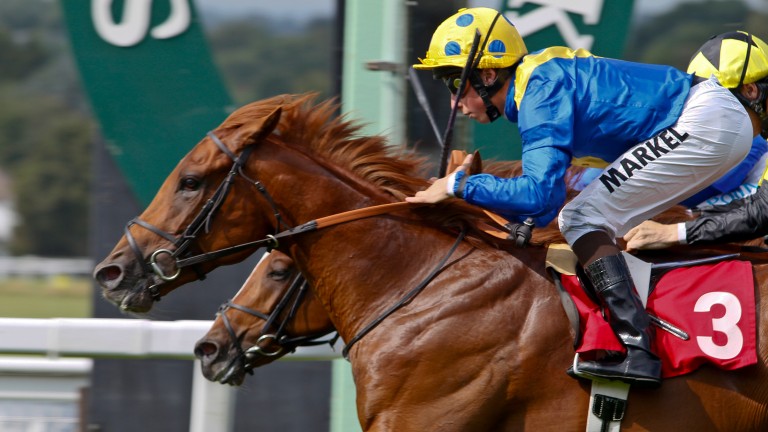 Fantastic Moon: the first foal out of the Listed-winning Pivotal mare Rhadegunda
Mark Cranham
1 of 1
By Martin Stevens 4:05PM, MAR 10 2019

Haras de la Haye Pesnel has got in late with a notable new arrival to the stallion ranks in France this year – Cracksman's half-brother Fantastic Moon.

The nine-year-old son of Dalakhani was the first foal bred by Hascombe and Valiant Studs from its Listed-winning Pivotal mare Rhadegunda, a maternal granddaughter of 1,000 Guineas and Sussex Stakes heroine On The House.

Fantastic Moon was sold to Rabbah Bloodstock for 210,000gns at Book 1 of the Tattersalls October Yearling Sale and entered training with Jeremy Noseda, for whom he won his first two starts.

He scored on his debut over 7f on the Newmarket July course and followed up with a head victory over Tha'ir in the Group 3 Solario Stakes at Sandown.

Next came a fair fifth to Steeler in the Royal Lodge Stakes when finding trouble in running, but he failed to recapture his early form in five subsequent starts.

Four years after giving birth to Fantastic Moon, Rhadegunda produced the Frankel colt Cracksman, a four-time Group 1 winner who was deemed by international handicappers to be the joint-best horse in the world in 2018 on the strength of his runaway victory in the Champion Stakes at Ascot.

Cracksman has subsequently joined the roster at Dalham Hall Stud, where he is covering his first mares at a fee of £25,000.

Fantastic Moon is standing at Haye Pesnel at €2,500 alongside Crossharbour and Honolulu.