Covering for dam of Limato represents step up in grade

Come April is due to foal to Invincible Spirit in April 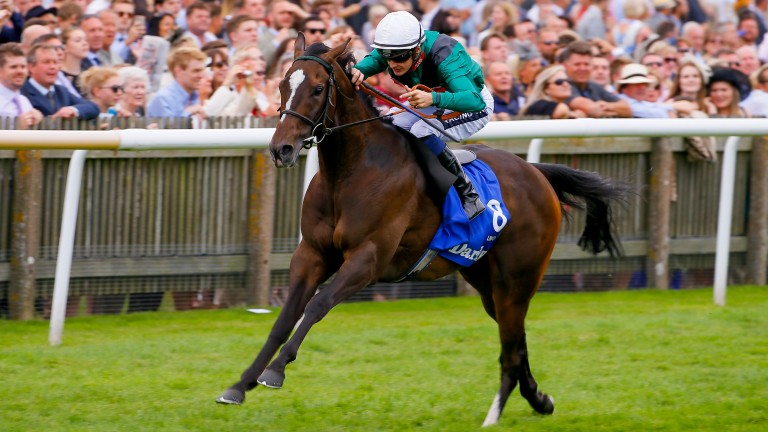 Limato's dam, the Singspiel mare Come April, is due for a date with one of Europe’s most decorated stallions, the Banstead Manor stalwart Dansili.

Limato, who was bred by Seamus Phelan at Tetrarch Stud, landed a brace of Group 1s in 2016 to be crowned joint-champion sprinter, and it was those exploits that convinced the breeder of the need to provide Come April with a high-quality cover.

“With Limato being crowned champion sprinter we thought the mare warranted going up in grade,” said Phelan. “When you look at Dansili’s stats, he’s produced multiple Group 1 winners around the world and has an excellent record of producing black-type horses.

The Dansili over a Sadler’s Wells line mare cross has also produced multiple Group 1 winners. That includes The Fugue, who is out of Twyla Tharp who is a relative of Come April. Hopefully the cross can work again.”

Phelan also revealed that the apple of his eye was due to foal to Invincible Spirit around April time. “We don’t know whether it will be a filly or a colt,” he said. “But when you get to this level it doesn’t really matter. The family is basically champions from top to bottom now, with The Fugue and Compton Admiral in there as well.”

Limato is not the only award winner to have emerged from Tetrarch Stud in 2016, as Phelan himself received the Small Breeder of the Year Award at the Irish Thoroughbred Breeders’ Association’s annual ceremony.

“You never expect things like that, you just do the best you can and hope for the best and when it works out so well it’s wonderful for all the family,” he said. “We’re a small operation and everyone gives us a hand. It’s pretty tough at the bottom end trying to make it all pay, you’ve got to work hard because it’s an expensive business.”

Phelan also has two other mares on the farm penciled in for exciting covers, Musicology - also a daughter of Singspiel, and Timeless - a daughter of Tamayuz.

“We try to buy mares from good lines that go back a bit and see if they can strike again like Come April did. When you have small numbers you have to be very careful. Timeless will go to Outstrip in Newmarket and Musicology is going to Tagula to see if we can get another Limato!”