Could It Be a new star for War Front? Uncle Mo half-sister dazzles at Dundalk 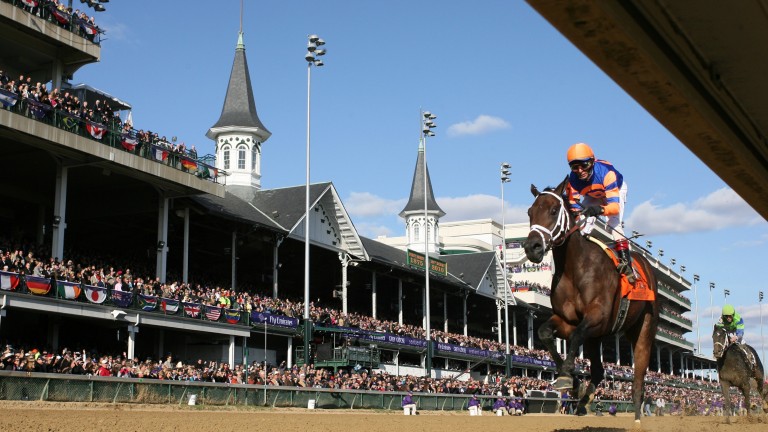 Could It Be Love, an Aidan O'Brien-trained War Front half-sister to Grade 1 winner and exciting young sire Uncle Mo, relished a step up in trip when she hosed up in the Irish Stallion Farms EBF Fillies Maiden over 7f at Dundalk on Tuesday.

The three-year-old filly had run three times last year, all over the minimum trip, finishing placed once when third to subsequent Anglesey Stakes scorer Actress at the Curragh.

With trainer's son Donnacha O'Brien in the saddle, Could It Be Love made all the running on her first start of the season at Dundalk and eased to a six-and-a-half-length victory over Godolphin's Terzetto, an Iffraaj half-sister to Chesham Stakes winner Champlain.

Could It Be Love's stablemate Hence, a Galileo sister to Alice Springs who had finished placed twice last year and was just touched off again at Naas last month, was a disappointing sixth as the even-money favourite.

Could It Be Love looks another top-notch prospect by Claiborne Farm kingpin War Front for Coolmore interests, who have also campaigned Air Force Blue, Brave Anna, Declaration Of War, Hit It A Bomb, Roly Poly, US Navy Flag and War Command by the sire.

None of Air Force Blue, Brave Anna, Hit It A Bomb or War Command proved that they had trained on at two, leading some to question War Front's ability to supply runners who improve at three in Europe, but Could It Be Love looks to be further proof – along with Declaration Of War and Roly Poly – that he can indeed get high-class horses of Classic age and older.

Could It Be Love is out of the winning Arch mare Playa Maya, bought by Coolmore for $1.65 million at Fasig-Tipton in Novemeber 2010, at the end of the season in which Uncle Mo had won two Grade 1 two-year-old contests – the Champagne Stakes and Breeders' Cup Juvenile – by wide margins.

Uncle Mo stands at Coolmore's Ashford Stud in Kentucky, where his fee has soared from $35,000 in his first season in 2012 to $125,000 this year, having fielded champion two-year-old colt and Kentucky Derby hero Nyquist and fellow Grade 1 winners Dream Tree, Gomo, Mo Town and Outwork in his early crops.

Playa Maya – an 18-year-old daughter of Arch – is now the dam of seven winners, one of whom, the Silver Deputy mare Grosse Pointe Anne, has produced the Listed-placed runner Indian Annie to Uncle Mo's sire Indian Charlie.

Playa Maya is in turn out of the winning Dixieland Band mare Dixie Slippers, a half-sister to Grade 3 scorer Woods Of Windsor and to the granddam of German Listed winner Impetious.

A tale of two continents for US champion sire Uncle Mo

FIRST PUBLISHED 6:53PM, APR 10 2018
Could It Be Love looks to be further proof – along with Declaration Of War and Roly Poly – that War Front can get high-class horses at three and older