Son of Exceed And Excel introduced to breeders at €6,000 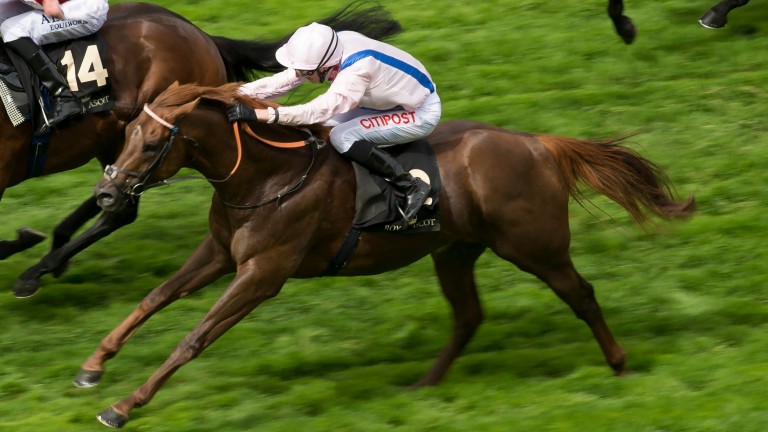 Multiple Group winner Cotai Glory has been retired from racing and becomes the latest new recruit to join Tally-Ho Stud's roster for the 2018 breeding season.

Trained by Charlie Hills throughout his career, Cotai Glory broke his maiden in the July of his juvenile season before going on to finish second behind Limato in the Listed Rose Bowl Stakes and winning the Group 3 Molecomb Stakes.

At three, he returned to winning ways when taking out the Listed Scarbrough Stakes and at four finished a close second behind Profitable in the Group 1 King's Stand Stakes. His busy four-year-old campaign also included a short-head victory over Alpha Delphini to land the Group 3 World Trophy Stakes at Newbury.

This year, he finished in the places on several occasions with runner-up finishes in the Group 3 World Trophy Stakes and the Grade 2 Nearctic Stakes.

Bred by Glebe Stud, J F Dean and Lady Trenchard, Cotai Glory is out of the unraced Elusive Quality mare Continua and is a half-brother to the Listed-winning Permission. He was purchased by Sackville Donald for 75,000gns at Book 2 of the Tattersalls October Yearling Sale in 2013.

The son of Exceed And Excel will stand at a fee of €6,000 for his first season at stud.

Tony O'Callaghan, owner of Tally-Ho Stud, said: "We have been following Cotai Glory ever since he broke the two-year-old track record at Glorious Goodwood over 5f in the Molecomb and we are delighted to have secured him.

"With Danetime and Kodiac we have already enjoyed a lot of success at Tally-Ho with Danehill line stallions and we very much feel that Cotai Glory ticks all the boxes. We will be supporting him strongly over the coming years."

The County Westmeath operation also had news of fees for the remaining stallions on its roster with their leading sire Kodiac to remain unchanged at €50,000 for 2018.

It has been quite a year for the son of Danehill as he eclipsed Sunday Silence's world record of juvenile winners in November thanks to Statehood's victory to bring him to a tally of 52.

If you enoyed this, you should read

How Kodiac went from workmanlike to world-beater in ten years

FIRST PUBLISHED 2:07PM, NOV 17 2017
We have been following Cotai Glory ever since he broke the two-year-old track record at Glorious Goodwood and we are delighted to have secured him