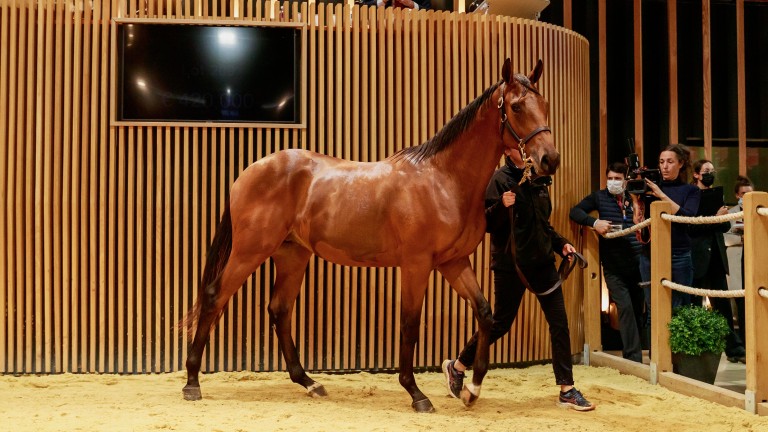 On a day when Coolmore's 2021 recruit Wootton Bassett dominated the upper end of the Arqana scoreboard, a protracted battle late in the session propelled a Camelot colt to top lot.

Presented by Ecurie des Monceaux, the colt hails from a blue-chip line of mares who raced for the late Daniel Wildenstein and his family, Board Meeting's sister Bright Sky landing a Diane and an Opera at three.

De Watrigant stood with Coolmore's French representative Hermine Bastide, explaining: "I bought him for MV Magnier and he's a beautiful colt by a proven sire. I bought one horse for them previously, also by Camelot, and he was Mythical, who was Group 1-placed."

Wootton Bassett has the golden touch

The opening exchanges of Monday's session were dominated by former Haras d'Etreham and current Coolmore resident Wootton Bassett, who accounted for three lots to make in excess of €200,000 from the first 50 catalogued.

Anthony Stroud secured all three, with a well-bred pair of the sire's progeny both going to the Audarya team of James Fanshawe and Alison Swinburn, while the €420,000 early pacestter was bought for an unnamed client.

Brought to the ring by perennial Deauville favourites Ecurie des Monceaux, the colt (lot 49) boasts an outstanding pedigree, being out of an unraced Frankel half-sister to QEII Stakes and Prix du Moulin hero Charm Spirit. Other notable racing performers in the immediate family include Poule d'Essai des Pouliches heroine Dream And Do and Greenham runner-up Mehmento. 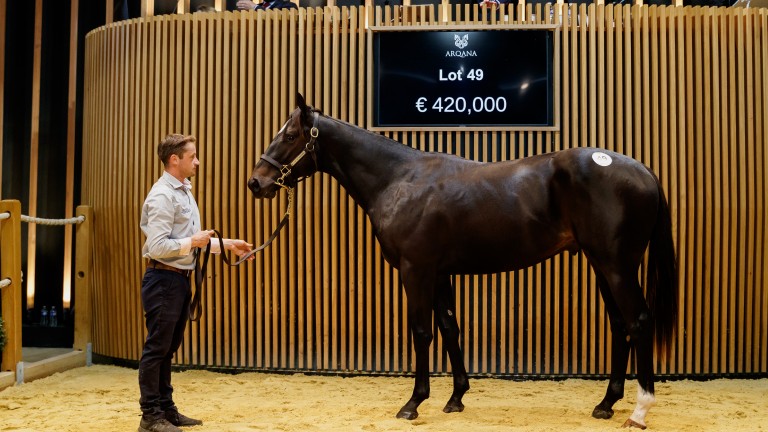 "He was expensive!" said Stroud, who said no decision had yet been made about where the colt would be trained. "He comes from a very good family and an excellent farm. I liked him a lot, though that goes without saying."

As darkness fell it was another case of the agent being seduced by the sire, with Stroud going to €310,000 for a colt (lot 153) bred by Lady O'Reilly's Haras de la Louviere.

From a mare out of one Prix d'Aumale winner, Top Toss, and thus a sister to another in Lesstalk In Paris, the May-born colt will be trained by Simon and Ed Crisford.

Stroud's earlier trips to the Wootton Bassett well reflected the success of a previous Arqana purchase for Swinburn.

Audarya - who adorns the cover of the catalogue this week - was bought by Stroud for €125,000 four years ago, having been bred by Francois and Elizabeth Doumen's Haras d'Ecouves at a fee of €4,000.

That purchase came in the wake of Almanzor's trailblazing success for the stallion and he has covered ever-better books in the intervening years, with the 2019-conceived yearlings going through the ring this week - Wootton Bassett's penultimate crop from his time in France - the results of €40,000 covers.

Swinburn's famous emerald green, red and yellow silks will be carried by a €210,000 filly (lot 14) out of Harem Lady from Etreham and a €270,000 La Motteraye-consigned colt from the rich Wildenstein family of Loup Breton and, before her, Loup Sauvage and Loup Solitaire.

While Stroud and his varied clients proved near-insatiable in their quest for the produce of Wootton Bassett, other operations were able to buy examples near the top of the market.

As the rain poured out of the Normandy night it was Oceanic Bloodstock's Michel Zerolo who landed a colt from La Motteraye Consignment out of the an unraced Frankel daughter of Juddmonte's Nassau Stakes heroine Winsili.

Zerolo left the ring to start working the phones but, with such extraordinary demand for the sire, he will have been confident of finding interested parties pretty quickly. 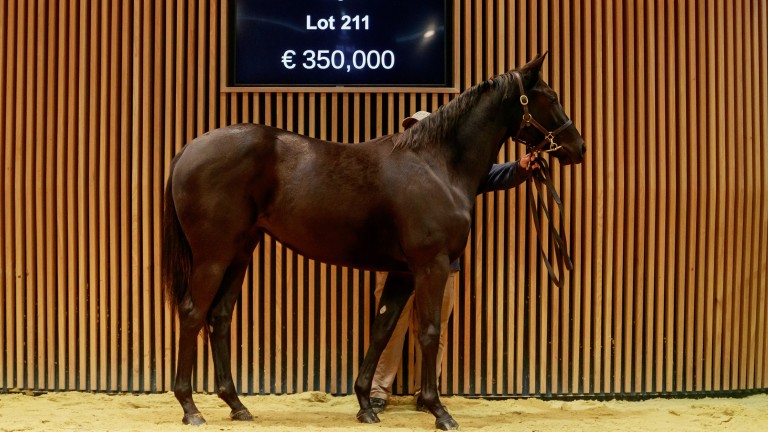 Lot 211 became the seventh yearling by Wootton Bassett to sell for €200,000-plus on day one of the Arqana October Yearling sale
Zuzanna Lupa

Even later in the piece Jamie Piggott and trainer Nigel Tinkler got in on the act when paying €350,000 for a Wootton Bassett daughter of the Acclamation filly Broken Applause, who was Group 3-placed at two.

"The Wootton Bassetts seem to be as expensive, if not more expensive than gold," said Piggott. "She's a wonderful filly. Nigel keeps saying she's an Ascot filly and I truly hope he's right.

"She looks forward, she looks sharp and I don't think we'll have to wait too long for her."

Al Shaqab were able to win out at €220,000 for another Monceaux offering by the sire, a filly out of the South African stakes performer Olma.

At the end of the session Wootton Bassett had accounted for a staggering seven of the 14 lots to make over €200,000.

The Aga Khan Studs' stallion Siyouni has become an ever-greater focus for John Magnier and his partners, with his Arc-winning son Sottsass now standing at Coolmore stud and their five-time Group 1 winner St Mark's Basilica due to join the roster next year. 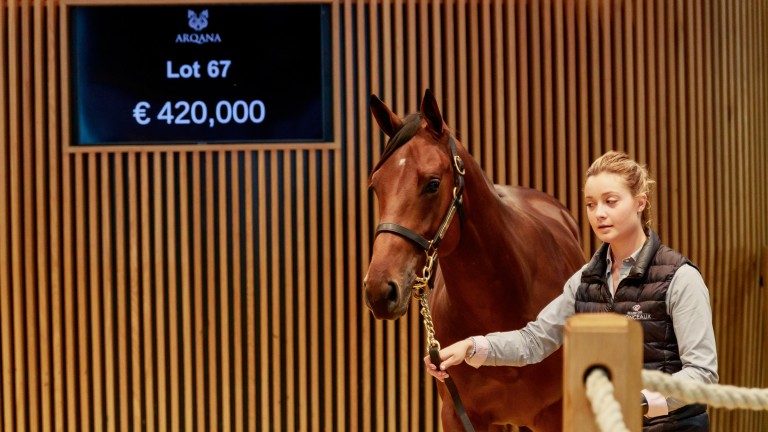 A son of Siyouni was knocked down for €460,000 to Laurent Benoit of Broadhurst Agency on day one of the 2021 Arqana October Yearling sale
Zuzanna Lupa

In that vein Laurent Benoit went to €420,000 to acquire a colt out of the Listed-winning mare Modern Eagle, whose Mastercraftsman son Masterpiece was third in both the Prix Francois Mathet and the Coupe des Trois Ans.

Another notable sale for Monceaux, the second dam Millionaia split Latice and Grey Lilas in the Prix de Diane.

While a trainer has yet to be decided, Benoit said: "He's a son of Siyouni, the dam is by Montjeu and for me he was the best colt in the sale.

"We knew we'd have to fight for him, he drew a lot of interest around the ring."

Bouchard looks to build broodmare band with daughter of Dubawi

Given the depth of the German families behind her - Nuit Polaire is a sister to Oaks d'Italia winner Night Of Magic, while Deutsches Derby winner Nutan and Preis der Diana runners-up Nymphea and Nightflower also appear under second dam Night Teeny - her daughter by Dubawi was always going to be an attractive proposition for owner-breeders.

Chantilly Bloodstock's Gerard Larrieu signed at €340,000 on behalf of one of his most loyal clients, Jean-Louis Bouchard.

Asked what he liked about the filly, Bouchard said: "Everything. I love Dubawi. I like the filly, she's very tall.

"I bought a stud about four or five years ago and we have been building that up and I need very good mares for the future. I think she should be a very good broodmare, she's the sister of a Group 1 winner, she's got everything [going] for her. And the price is okay."

One of the paradoxes of the resurgent breeding scene in France over the last few years has been that, as demand for French-bred stock has boomed, it has become harder to keep a decent number among the best prospects from heading abroad.

Al Shaqab were the successful bidders on a hotly-contested son of Sea The Stars, a full-brother to Sivoliere - who was Group-placed at two - and hailing from the family of Coronation Stakes winner Sophisticat and the wonderful US racemare and producer Serena's Song.

Haras d'Etreham sold the €220,000 colt and will keep a part, while a client of trainer Stephane Wattel is also involved in a partnership put together specifically to keep the horse in France.

Al Shaqab's interest was undoubtedly sparked by the fact that the colt is out of a Listed-winning Kingmambo mare in Sefroua.

Chief operating officer Paul Hensey said: "If there was one horse we wanted to get, he was it, so we're delighted. Sea The Stars is a champion and is going from strength to strength, while, from our point of view, we know Zelzal very well and it's a very similar cross. Hopefully he goes on to be as good."

Churchill and Cloth Of Stars lead the way for freshmen 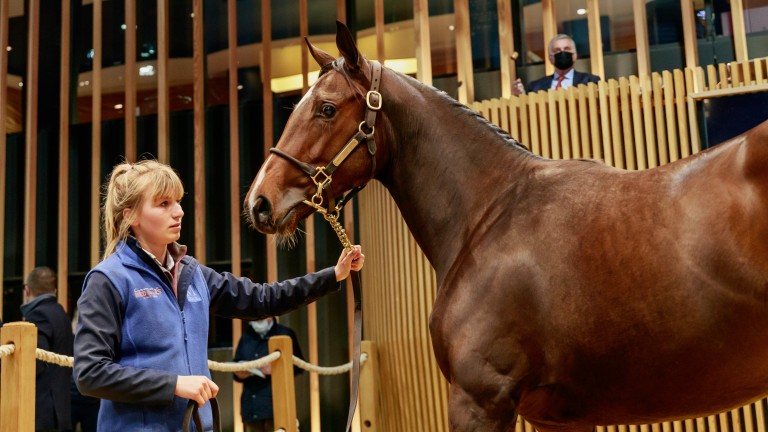 While there were not too many surprises among the stallion names populating the upper reaches of the first-day charts, there were notable results for a couple of first-season sires.

A half-sister to the Aga Khan's Grand Prix de Paris winner Shakeel, by Coolmore's Churchill and presented by Haras de Montaigu, was the subject of a lively exchange between bidders, with Zerolo and Jean-Claude Rouget the last left standing - or rather seated in the Arqana restaurant - as the hammer fell at €350,000.

The third part of a now famous equation will be owner White Birch Farm's Peter Brant, and Zerolo said: "We liked her with Jean-Claude and she's a lovely filly by a good first-year stallion and from a lovely Aga Khan family. We hope she's good. She'll be trained by Jean-Claude right here in Deauville." 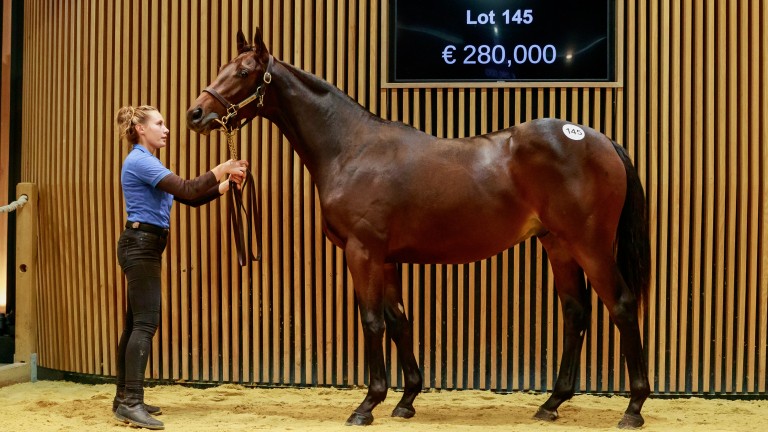 Lot 145, a colt from the first crop of Cloth Of Stars, was sold for €280,000 at Arqana on day one of the October Yearling sale
Zuzanna Lupa

Cloth Of Stars made his name with Group 1 success at four but is also fondly remembered for twice being placed behind Enable in the Arc.

A half-brother to Aiming For Rio and this year's Prix Ris-Orangis winner Ocean, he hails from a speedy family that also features Cherry Hinton Stakes winner Torgau as second dam, and further back the July Cup runner-up Grey Desire.

FIRST PUBLISHED 9:19PM, OCT 18 2021
The Wootton Bassetts seem to be as expensive if not more expensive than gold

Regally bred First Eleven on the move to Haras de la Bareliere from Spain Kool Kompany relocates to Clongiffen Stud for the 2022 season Relations of Breeders' Cup stars on show at Wolverhampton 'He's an outstanding individual' - Eagles By Day to join Glenview Stud roster 'A proper horse' - Malone goes to £62,000 for Platinumcard at Goffs UK HIT Sale 'This kind of filly is very rare' - Group 1 winner Rougir among Arqana stars