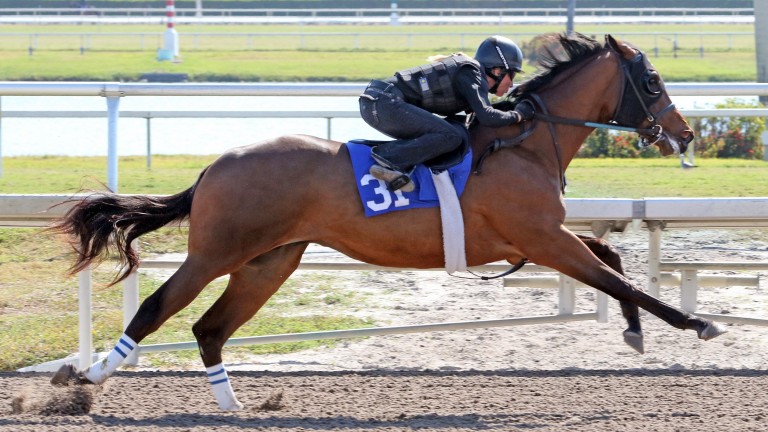 Three seven-figure two-year-olds, including two sold for $1.2 million each, bolstered the Fasig-Tipton Gulfstream Sale on Wednesday, as the auction posted the second-highest average and median in the sale's history, and the highest in both categories since the move to Gulfstream Park in 2015.

"It was an extremely strong marketplace at the upper end," Fasig-Tipton president Boyd Browning said. "There were multiple bidders on the horses that performed well, vetted well, made good videos, and that's the same environment we've lived in for a couple of years."

Hip 9, a Medaglia D'Oro filly, got the bidding started early when she sold for $1,200,000 off a :10 flat work. By the sire of champions Songbird and Rachel Alexandra, she was purchased by Stonestreet Stables from the consignment of Niall Brennan Stables, agent. She is from the family of Grade 1-winning millionaire Dream Supreme and Grade 1-winning juvenile and proven sire Majestic Warrior.

Also dropping the hammer at $1,200,000 was Hip 77, a colt by popular juvenile sire Into Mischief. Purchased by OXO Equine from Eddie Woods' consignment, the colt also worked in :10 flat. His immediate family includes Grade 1 winners Irish Smoke and Book Review.

"(There was) great attendance and distribution of the buying population across the board," Browning added. "All in all, I thought it was a strong horse sale. We continue to see selectivity in the marketplace. The market is healthy. It is not exuberant, it is not crazy."

Browning said the decline in gross from a year ago was attributable to the higher RNA rate, not an indication of a weaker overall market

Barbara Banke's Stonestreet Stables has enjoyed remarkable luck with fillies by Medaglia D'Oro, the Darley stallion who sired the operation's 2009 Horse of the Year Rachel Alexandra, among others.

Bred in Kentucky by Don Alberto Corporation and purchased by Hades Stable for $200,000 from Gainesway at the 2017 Keeneland September Yearling Sale, the filly was produced from the stakes-placed Distorted Humor mare Mi Vida. The filly's second dam, the stakes-winning A.P. Indy mare Crystal Current, is a daughter of multiple Grade 1 winner Dream Supreme, also the dam of Grade 1 winner and sire Majestic Warrior.

"I've had really good luck with Medaglia D'Oro fillies," Banke said, adding she was pushed on the price. "I love them to race and as broodmares. I knew it was going to be (at least) $1 million. There were a lot of horses that didn't make it through the process and vet. This was our pick. We came and did it early, and now I'm going to have an iced tea."

Although the filly was bought for Stonestreet, Banke said there was a possibility LNJ Foxwoods, which was among the bidders on the filly, might join her in ownership.

The filly breezed an eighth-mile in the co-fastest under tack show time of :10.

"She prepped really fast and came back and worked as good as she prepped," bloodstock agent John Moynihan said. "We've had really good luck with Medaglia d'Oro fillies. That is a lot that added up there... we decided to take a swing, and hope we're right."

"She's a beautiful filly with a real pedigree," Brennan said. "She was unbelievable on the racetrack. We knew everybody loved her and she was very popular. She was just like a machine on the racetrack. She jumped through all the hoops, as they say. I didn't know how much she would bring. You never really know if they will bring $1 million or more. We're delighted for them and hope she is a very good filly for them and a broodmare down the road."

Larry Best made his first big splash in the two-year-olds in training market last year, and he's enjoyed early success with one of his seven-figures purchases on the Road to the Kentucky Derby.

Best, who buys in the name of OXO Equine, struck again at the highest level during Wednesday's session, going to $1.2 million for an Into Mischief colt from the Eddie Woods consignment.

The colt, Hip 77, was bred in Kentucky by Stoneway Farm and purchased by Quarter Pole Enterprises for $190,000 from Paramount Sales at the 2017 Fasig-Tipton July sale. The colt's second and third dams, respectively, are graded stakes winners Added Asset and Added Elegance.

During the under tack show, the colt breezed an eighth-mile in the co-fastest time of :10.

"I wasn't surprised with the price," Best said. "I don't make the market. The market drove it because the individual was thought to be a quality prospect. I thought he was one of the better colts at the sale."

Best said having Lecomte Stakes winner Instilled Regard, who he purchased for $1.05 million out of the 2017 Ocala Breeders' Sales March sale, as a potential Kentucky Derby Presented by Woodford Reserve starter did not play a factor in his bullish purchase this year.

"I don't get hung up on the Kentucky Derby trail," said Best, adding that his recent pricey purchase will be sent to trainer Jerry Hollendorfer, who conditions Instilled Regard. "My goal is to win quality stakes races over the long term, and if the horse takes you to the Kentucky Derby, then you are blessed."

Woods said the colt's price was a bit of a surprise.

"I knew he would sell well, but I didn't think he would get past $1 million," he remarked. "He never missed a beat. He breezed fantastic and vetted really well. Everyone was on him, and that is what it takes."

Woods said the colt had improved since being bought as a yearling.

"He's grown up a lot. In July, they're very babiyish, and you have to look through a lot. He had all the parts and had one little issue that is still there. It is very, very minor and everyone lives with it. It's just common sense."

Trainer Todd Pletcher signed the ticket for the Fasig-Tipton Gulfstream sale's second seven-figure purchase on Wednesday, a $1 million colt by Scat Daddy that was purchased on behalf of Coolmore.

Sold by SGV Thoroughbreds as Hip 31, the colt is the first foal out of stakes winner Risky Rachel and is from the family of multiple Graded stakes winner Say Florida Sandy.

"He's by a world-class stallion, one of my all-time favorites. I trained him, and it's great to see him have so much success," Pletcher said. "A great loss to the industry that he's gone too soon. He gets it on turf, he gets it on dirt.

"This is a beautiful horse, one that we've had on the radar for a while. He came in here and had a super breeze and came out of it in good order. I think when you get to a certain level, you don't know what they're going to bring. We knew he wasn't going to be cheap, but we weren't sure where he would land."

SGV's Steve Venosa said the sale of the colt was the culmination of a plan put into place to have breeder Sanford Bacon's mare Risky Rachel bred to Scat Daddy with the hope that the resulting New York-bred foal would be sent to the Gulfstream auction.

"It was bittersweet because it is the first foal out of the mare, and he didn't want to sell," Venosa said. "We discussed it and decided if he went to a good home, that would be a good outcome, and it worked out with Coolmore and Todd Pletcher ending up with him. He is a New York-bred, so maybe (Bacon) will be able to see him run."

Venosa said the colt showed his class during the days leading up to the sale. "He showed as well the last day like he did the first day when he rolled off the van. He is nothing but class, and he was rewarded in the ring."

Venosa also credited his personnel with achieving such results in the sale ring.

First for Territories as Darley shuttler strikes on the Sunshine Coast Records across the board as OBS June Sale draws to successful conclusion Uncommon winner for Cable Bay as son swoops in Listed event at Eagle Farm 'At some point you have to take a step back and say, 'Holy cow!'' Fillies lead way at day two of the OBS June Sale with top lot fetching $420,000 Airlie Beach brother sells for €230,000 as Gordon Elliott's owners emerge on top