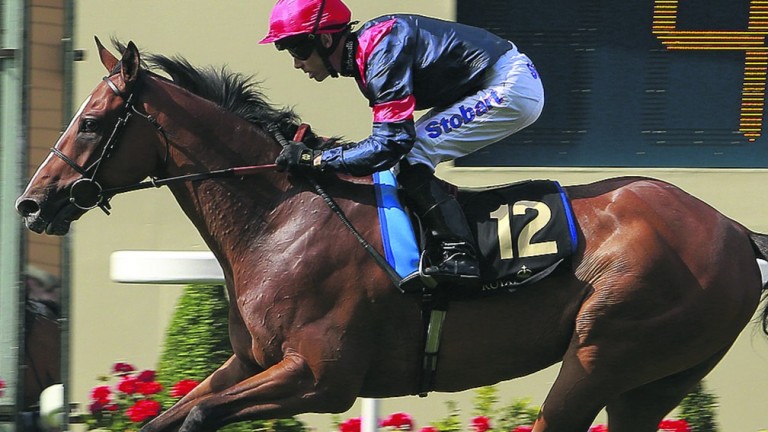 Trip To Paris: Gold Cup hero makes his long-awaited return to the track at Newbury
Mark Cranham
1 of 1
By James Thomas 3:22PM, NOV 11 2016

Champs Elysees has been purchased from Juddmonte Farms to stand under the Coolmore National Hunt banner at Castlehyde Stud in a deal brokered by Badgers Bloodstock.

The 13-year-old son of Danehill is out of blue hen Hasili, a daughter of Kahyasi, and is a brother to the Group 1 winner-producing sires Dansili and Cacique as well as the top-class racemares Banks Hill and Intercontinental.

A triple Grade 1 winner in North America when trained by Bobby Frankel, Champs Elysees retired to Banstead Manor in time for the 2010 covering season and has since enjoyed considerable success on the Flat.

At the Tattersalls Autumn Horses In Training Sale Champs Elysees's progeny were in high demand, with his son Harlem topping the sale. Tom Malone, acting for an owner with Colin Tizzard, went to 510,000gns for the French Listed winner but was outbid by Alastair Donald on behalf of a Hong Kong-based client at 520,000gns. Harlem will now head to Australia and join trainer David Hayes.

Also bound for Australia is the former Charlie Hills-trained three-year-old Exoteric who was knocked down to Chris Waller Racing for 180,000gns. Several leading National Hunt interests also got in on the act with Harold Kirk and Willie Mullins signing for a pair of three-year-olds - Contingency and Low Sun - at 31,000gns and 65,000gns respectively.

David Bridgwater secured Cohesion for 85,000gns and others were purchased by Seamus Durack and Paul Webber.

"Champs Elysees is a great addition to the team here," said Castlehyde manager Tom Gaffney. "He sires high-class racehorses and gets very good-looking stock. We're delighted to have got him."

Simon Mockridge, stud director at Banstead Manor, commented: "Champs Elysees has been a wonderful servant both on the racetrack and most recently during his seven seasons at Banstead Manor Stud.

"He has had 17 stakes performers this year including his daughter Suffused, who was so narrowly defeated in the Grade 1 EP Taylor Stakes. I'm sure Coolmore will give him every opportunity of continuing this success."

A fee for Champs Elysees will be announced at a later date.

FIRST PUBLISHED 3:22PM, NOV 11 2016
He sires high-class racehorses and gets very good-looking stock. We're delighted to have got him