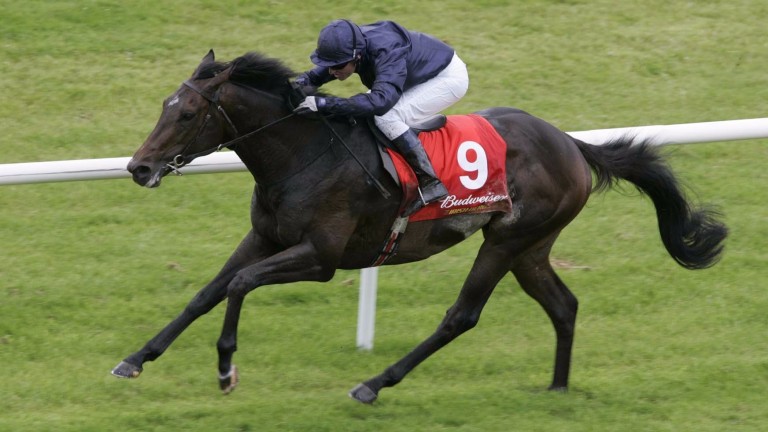 After spending the first six seasons of his stallion career in Normandy, Soldier Of Fortune was given a hero's welcome by breeders when he returned to his birthplace of Ireland to join the Coolmore National Hunt ranks this year.

The Irish Derby-winning son of Galileo was the busiest sire in Britain and Ireland of 2016 in terms of number of mares covered, with 304 according to the recently published Weatherbys Return of Mares.

Mark Johnston's 11-time winner Fire Fighting is the best horse supplied by Soldier Of Fortune in the Flat sphere, but it was the Grade 2 juvenile hurdle victory of Slowmotion and the ascent of French jumpers Bleu Azur and Carlita Du Berlais that will have cheered the many National Hunt breeders who used him this year.

After Soldier Of Fortune, the next three most active sires in Europe this year were all National Hunt-oriented sons of Monsun - no surprise when two of the showpiece races at Cheltenham in March were won by Annie Power and Sprinter Sacre, paternal grandchildren of the late German sire.

Getaway, whose first four-year-olds include promising bumper winner Agamemmon, covered 299 mares; Ocovango, whose first foals were born this year, was on 274; and Shirocco, sire of Annie Power, was visited by 248.

Fame And Glory, whose first crop are two-year-olds, was the fifth busiest sire of 2016, with 243 mares, while Mahler, whose early progeny includes Fairyhouse Grade 2 winner Sutton Place, was sixth with 237.

Of those top six, only Glenview Stud resident Shirocco is not marketed under the Coolmore National Hunt banner, which also accounts for another four stallions who covered 200 or more mares this year - Walk In The Park, the newly repatriated sire of Douvan, on 222; Leading Light, whose first foals were born this year, on 217; Westerner, sire of Cheltenham Festival heroes Cole Harden and Western Warhorse, on 215; and Ask, whose oldest crop are aged four, on 200.

Kodiac was the Flat stallion who enjoyed most patronage in 2016. The Tally-Ho Stud resident, a master sire of two-year-olds as a Royal Ascot double from sons Ardad and Prince Of Lir proved in June, covered 232 mares.

The next best figure mustered by one of the Flat brigade was 208, for last year's leading first-season sire Zoffany. His Coolmore studmate Camelot, whose first two-year-olds race next year, covered 207 mares.

The other members of the 200+ club in 2016 were Sageburg, sire of Rockfel Stakes winner Spain Burg and Saturday's Betfair Price Rush Hurdle scorer Ch'Tibello and the recipient of 224 mares; Gutaifan, who covered 203 mares in his first season at Yeomanstown Stud; and Elzaam, who covered 201 and did not disappoint his supporters by getting off to a good start with his debut juvenile runners this year.

The number of sires who covered 200 or more mares -16 - is one more than at this stage last year. Only Soldier Of Fortune covered 300 or more, compared with five in the 2016 Return of Mares. Some books are likely to increase slightly in the Supplement to the Return of Mares published early next year.

MOST ACTIVE STALLIONS IN 2016