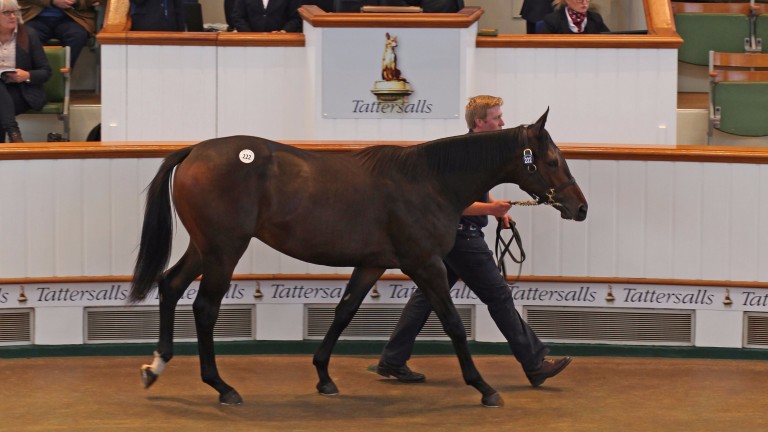 The olive branch extended by Sheikh Mohammed throughout the sales season was firmly grasped by Coolmore during a remarkably strong second session of Book 1 of the Tattersalls October Yearling Sale on Wednesday, as MV Magnier went to 2,000,000gns for a colt by Darley's linchpin sire Dubawi.

The colt promised to be one of the standouts in the catalogue, being the first foal out of the phenomenally talented dual champion filly Sky Lantern, and as the price continued to leap in 100,000gns increments it quickly became apparent he would live up to his star billing.

His purchaser came as more of a surprise however, with the colt now due to be raced in partnership by Coolmore and the Mayfair Speculators and trained by Aidan O'Brien,.

"Dubawi is a very good sire," said Magnier. "And this colt is out of a brilliant mare. She was very quick - she won the Moyglare at two and then the 1,000 Guineas and Coronation Stakes at three. This colt is just a very good-looking Dubawi."

This is, of course, not the first Dubawi yearling that Coolmore have purchased at Tattersalls, having bought the sale-topping filly out of Loveisallyouneed for 2,100,000gns just two years ago, while they have also secured yearlings by Darley's Bernardini in the US, most notably Gala Award, for whom they paid $1.55 million in 2012.

The 2,000,000gns Dubawi colt was bred at Rockcliffe Stud by the Keswick family, whose racing manager Ed Sackville commented: "We're obviously delighted. We have a policy of selling the colts and keeping the fillies, and while we'd liked to have raced this horse ourselves, it is wonderful that he has sold so well. Sky Lantern had a Dubawi colt this year and is in foal to Frankel, so we have plenty to look forward to."

A short while earlier, Magnier had gone to 1,300,000gns to secure the Galileo colt out of Shastye offered by Newsells Park Stud, who became the third seven-figure yearling produced by the daughter of Danehill. His older brother Sir Isaac Newton fetched 3,600,000gns, a European record for a yearling colt, in 2013 and his unraced two-year-old sister Secret Gaze brought 1,350,000gns from David Redvers last year.

"Obviously Sir Isaac Newton was a very good horse and this is a lovely individual bred on the right cross," said Magnier. "What Galileo is doing is incredible: it doesn't matter if they’re colts or fillies, running over six furlongs or a mile and a half. And now he's coming through as a broodmare sire: you can't get away from him."

The transaction was a second notable result for Newsells with progeny of Galileo this week, having sold a filly by the champion sire out of Maureen to Godolphin for 800,000gns during the opening session.

"We've loved him since day one, so I'm delighted," said Newsells general manager Julian Dollar. "And Shastye has been such a star mare - John Warren bought her for Mr Jacobs in 2005 for 625,000 guineas. That was a lot of money, but what a mare she's been for Newsells. She's got us going both commercially and in terms of producing proper horses - she's been very good to us. We've got a few daughters out of her too, which is exciting."

Despite the success of the Newsells offerings this week, Dollar was quick to highlight the difficulties away from the uppermost echelons of the market.

"The market is very polarised," he said. "That makes great headlines when the good ones sell, but it's not so easy underneath that. We don't have a lot of depth, and if you have one that doesn't quite meet up with what is expected in Book 1 you're in danger of falling through the cracks."

US interests secure The Pentagon sibling

Fresh from purchasing the top lot at the Goffs Orby Sale, a €1.6m Frankel colt, Justin Casse waded into the market in Newmarket to claim a Galileo sister to ante-post Derby favourite The Pentagon for 1,550,000gns.

"He's been bought for an undisclosed American client," explained Casse, "He's going to keep the filly in Europe. This is his first foray into European racing, but a trainer is yet to be determined."

The Barronstown Stud-consigned filly is out of the Aga Khan's 2005 Prix Saint Alary winner Vadawina, which makes her a half-sister to Group 2 winner Vadamar and the Listed-winning Vedouma. Barronstown acquired Vadawina for €600,000 through Horse France at the 2013 Arqana December Sale.

"There's been plenty of nice horses and it's been very competitive in here this week, but this filly is a real collector’s item," added Casse.

"She's got amazing residual value already as her brother is one of early favourites for the Derby. To have a piece of that family should make for a fun couple of years. There's probably four or five sires that everyone in the world would want a piece of, and Galileo is at the top of that heap. I wanted something that was special from the pedigree standpoint."

The Japan-based organisation DMM.com may be an unfamiliar name on the bloodstock market, but the operation has wasted little time in making a sizable impact. During the JRHA Select Sale in January DMM.com bought Gentildonna's foal sister for ¥370 million (£2,472,375/€2,789,765), and in Newmarket on Wednesday they added a Frankel filly to their burgeoning stable at a cost of 1,400,000gns.

"We've been really focusing on this beautiful filly for many days, so we're happy to have got her," said the operation's representative Yohann Gainche, who was taking instructions on the phone from DMM's racing manager Takumi Nomoto during the bidding process. "She will be taken back to Japan now to race."

DMM.com is an electronic commerce company that is involved in around 45 different business services, including online retail, on-demand video services, and video game applications, as well as offering syndicated racehorse ownership. 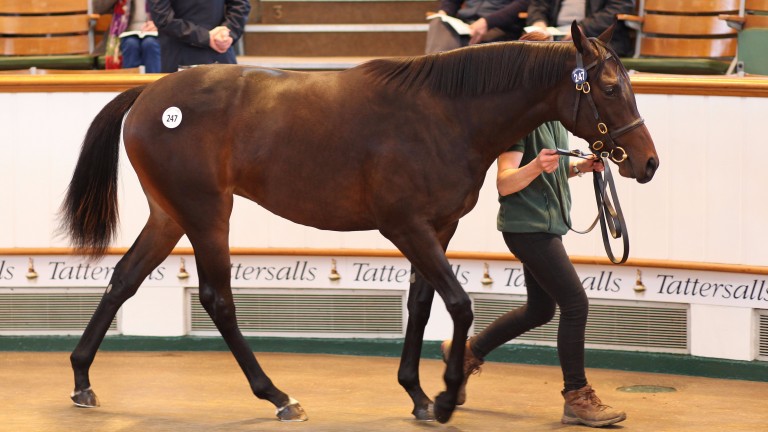 "The business only started a few months ago," continued Gainche. "Our philosophy at DMM is to start small and if our ventures go well we'll invest more."

The filly, offered by The Castlebridge Consignment on behalf of breeders Grangecon Stud, is a half-sister to the Grade 1 Canadian International Stakes winner Sarah Lynx and the Group 3 Sandown Classic Trial winner Sugar Boy. She is also inbred 3x2 to Danehill, being out of that sire's Group 3-winning daughter Steel Princess.

Gainche had also caused something of a stir during the opening session, when a series of seemingly nonchalant bids forced Alastair Donald all the way to 2,500,000gns for the Frankel half-sister to Oaks winner Talent.

"It's a real experience being involved," he said. "This is my first step in the horse business, but the more I hear and the more people I meet the more I think it's really interesting. I've bid at auctions before, but never in an atmosphere like this. It was a beautiful battle [on Tuesday], unfortunately it didn't go well for us."

It did not take long for the big hitters to flex their bidding muscles, with Anthony Stroud getting the better of Chad Brown with a 1,100,000gns suckerpunch for a daughter of Dubawi early in the session on behalf of Godolphin.

The filly, offered by Watership Down Stud, is the first foal produced by Group 1 British Champions Fillies and Mares Stakes heroine Seal Of Approval, who was bred by, and raced in the colours of, Tim Vestey.

"This is great as she was owned by my brother-in-law," said Watership Down's Simon Marsh. "We bought the mare a number of years ago and couldn't sell Seal Of Approval for ten thousand and now she's produced this extraordinary, beautiful filly. We've also got a Gleneagles filly foal out of her and she's back in foal to Dubawi - it's very exciting."

The filly's page looks open to plenty of improvement, as her dam's Group 3-placed half-sister Instance is in turn the dam of the hugely promising Frankel filly Betty F.

"She's a beautiful filly by Dubawi and out of a Group 1 winner," said Stroud. "She's a very good physical from a very good farm and once she's finished racing, she'll be one to look forward to in the paddocks. There's plenty going on in the pedigree as well."

The Godolphin team went on to secure two further seven-figure lots, the first of which was a Dubawi filly out of Fittocks Stud and Arrow Farm and Stud's Group 2 Park Hill Stakes winner Silk Sari.

"She’s a lovely filly from such wonderful bloodlines," said Stroud of the filly who descends from the Gerald Leigh family of Gossamer and Barathea.

Godolphin also went to 1,300,000gns for the Dubawi colt out of Vanity Rules, who was bred and sold by Hascombe and Valiant Studs. The colt is the first foal out of the Listed-placed daughter of New Approach, whose family traces back to the likes of Nuryana, an ancestress of Golden Horn, through 1998 Coronation Stakes winner Rebecca Sharp.

Few buyers have been as busy as Alastair Donald over the two sessions, and among his 21 purchases, that came in at an aggregate spend of 10,470,000gns, was a 1,300,000gns Dubawi filly out of the Listed-winning Galileo mare Soon, who was offered by New England Stud on behalf of Decorated Knight's owners Saleh Al Homaizi and Imad Al Sagar.

"We've had success before in the sale ring - it is important to sell well. Once we have committed to selling we will do so. Blue Diamond Stud has only been in existence for five years but we've achieved plenty."

The filly is the third foal out of Soon, who is in turn a daughter of Irish 1,000 Guineas winner Classic Park, who has the distinction of being Aidan O'Brien's first ever Classic winner.

By the time the final yearling had exited the ring a remarkable eight seven-figure lots had changed hands during the session, pointing to the rude health of the upper end of the market and taking the total of seven-figure lots over the two days to a Book 1 record of 12 million guinea-plus yearlings, with Thursday's session still to come.

Reprocolor breeder at Tattersalls to see family hit another high

FIRST PUBLISHED 7:46PM, OCT 4 2017
What Galileo is doing is incredible: it doesn't matter if they’re colts or fillies, running over six furlongs or a mile and a half