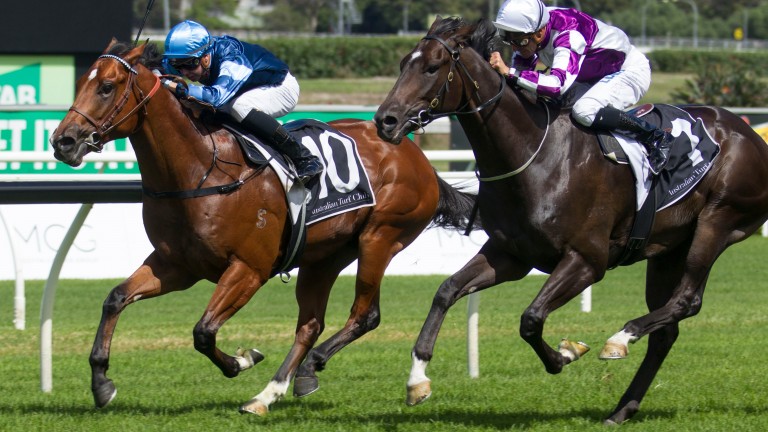 Coolmore have purchased a share in Group 2 Todman Stakes winner Aylmerton ahead of his run in Saturday's Golden Slipper Stakes at Rosehill.

The unbeaten Jean Dubois-trained two-year-old colt, who is bred and owned by Woodpark Stud's David Chaikin, had been on the radar of Hunter Valley studs and breeders after his Group 2 success at Randwick on March 10.

Sebastian Hutch, Coolmore's racing, sales and marketing manager, told ANZ Bloodstock News yesterday that the stud, along with some high-profile breeders, had bought into the colt ahead of Tuesday's Golden Slipper barrier draw.

Woodpark Stud remains in the ownership of the colt, who will be ridden by Hong Kong-based Tommy Berry from barrier eight in Saturday's A$3.5 million (£1.93m/€2.19m) race.

"Coolmore have put together a syndicate to take an interest in Aylmerton before the Slipper," Hutch said.

AYLMERTON makes his career a perfect 2 for 2 in the G2 UNSW Todman Stakes! https://t.co/yAvQDelrxn pic.twitter.com/RyqItaCEwK

"He has a very cosmopolitan pedigree, is very good looking and extremely talented, and he won what is traditionally the key lead-up to the Slipper in .01 of a second slower than Vancouver in 2015.

"He is doing this all in one preparation essentially and those sort of horses are very exciting. He is the sort of horse who can go on and be a stallion on our roster in due course."

Bred to southern hemisphere time, Aylmerton is by France's leading two-year-old sire Siyouni, a son of Pivotal who won the Prix Jean-Luc Lagardere and the Listed Prix la Fleche at Maisons-Laffitte, as well as finishing second in the Prix Robert Papin and the Group 3 Prix la Rochette as a two-year-old.

Hutch would not reveal specifics of the deal, which reportedly could be worth up to A$20m if Aylmerton wins the Golden Slipper on Saturday.

Siyouni's Aylmerton could prove to be special following shock win

"There was an opportunity to be involved in the horse and we considered the merit of it and it seemed a great opportunity," he said.

"Fortunately, we have partners who are also keen to be involved. My understanding is that there was huge demand for the horse from the major farms and private investors, so Coolmore are lucky to be involved with him."

Hutch said Aylmerton would remain in Dubois's stable at least for the short-term but would not be drawn on who will train the colt after the Golden Slipper.

"We will get the Slipper out of the way and then we will make plans," he said. "The Slipper is a career-defining race and Jean Dubois has done a fantastic job with the horse up to this point and we look forward to Saturday."

Meanwhile, Coolmore will also be represented by stakes-winning colt Long Leaf, a son of Fastnet Rock, in the Golden Slipper Stakes on Saturday.

The Lindsay Park-trained two-year-old, who won his first three starts before finishing unplaced in the Blue Diamond Stakes won by Written By, will wear blinkers for the first time on Saturday.

"Kerrin (McEvoy) looked after him from that point onwards. David (Hayes) has given him a freshen up since and he was going to run him in one of the lead ups to the Slipper, but he didn't feel he needed to.

"Obviously, he has been up for a Blue Diamond preparation, but (the stable) is very happy with him and he worked well and will wear blinkers on Saturday. The high-pressure nature of a race like the Slipper will really suit him."