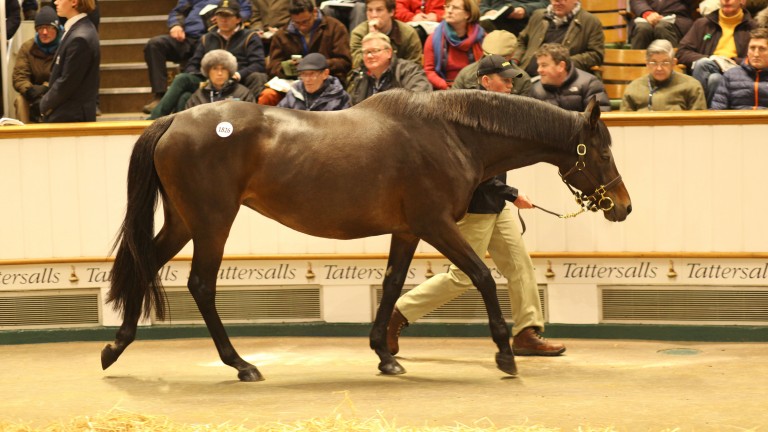 Hazariya: The Newsells Stud Park-consigned mare who topped the session at Newmarket on Tuesday
Laura Green
1 of 1
By Martin Stevens 3:33PM, NOV 30 2016

Dams of Derby winners rarely come on the open market, let alone a mare who has produced one who also scored in the Irish equivalent, so Harzand's dam Hazariya was always going to sell for a premium when she was offered in the second, select session of the Tattersalls December Mares Sale on Tuesday.

And so it proved when she was knocked down to MV Magnier of Coolmore - which stood five winners of the Derby in 2016 and is no doubt keen to produce another one - after he saw off underbidder Sheikh Fahad at 2,000,000gns.

"She's a lovely mare; any mare that breeds a Derby winner is special," said Magnier. "Dermot Weld was also praising her two-year-old [Haripour] to me.

"We'll bring her home and she'll go to Galileo. She's for my parents, Michael Tabor, Derrick Smith and Mayfair Speculators."

The sale of Hazariya represented a nifty bit of horsetrading for vendor Newsells Park Stud, which had bought the 14-year-old daughter of Xaar, also the dam of stakes winners Hazarafa and Harasiya and in foal to Invincible Spirit, for €480,000 at Goffs in 2014.

Newsells Park general manager Julian Dollar said: "She was good commercial business. She's a lovely mare who has been a pleasure and a privilege to look after the past couple of years.

"The guys at the farm have done a lovely job with her - she looked a picture. We've got two lovely fillies to race out of her and we wish the team at Coolmore all the best. She's going to good hands.

"The Derby victory changed the whole thing and we felt she was a 14-year-old mare. It was now or never - it was this year or we keep her. We're a self-sufficent operation, we don't get any injection of funds and we have to make it work. As sad as it was, it makes a lot of sense to put her through the ring."

Newsells Park has out of Hazariya a yearling filly by Fastnet Rock and a filly foal by Dansili.

Lyon gets paws on Zenyatta half-sister

The presence of a half-sister to history-making mare Zenyatta drew a new visitor to Tattersalls in the shape of Jane Lyon, who owns a boutique band of broodmares at her Summer Wind Farm in Kentucky that includes Littleprincessemma, the dam of none other than American Pharoah.

Eblouissante, consigned by the National Stud in foal to Dansili, is a seven-year-old by Bernardini and is also a half-sister to three-time Grade 1 winner Balance as well as Breeders' Cup Classic heroine Zenyatta.

Lyon managed to secure her, but was forced all the way up to 1,100,000gns to do so to make it the second time the mare has fetched a seven-figure price, having been bought by St George Farm at Keeneland for $2.1 million three years ago. She has a colt foal by Oasis Dream on the ground.

"The decision isn't totally final but I think for her sake we will leave her here until after she foals as I don't want to take any chances transporting her," said Lyon, who was sitting with Simon Marsh and Bill Farish.

"We're going to put our heads together and determine if we want to breed her to a European stallion, which is a distinct possibility. She is the kind of mare I can take back to America and breed to anyone I want. Obviously it's one of the stronger families in America and I did not have any of them.

"We're very excited and had a plan to buy at least four mares this year to replace stock that I've either lost or I'm going to retire. Now I have six so I'm very happy.

"I haven't bought at Tattersalls before but I've sold two yearlings quite a few years ago who were bred in America but had pedigrees that were interesting over here. It's been a successful day."

Lyon also had an update on Littleprincessemma.

"She is the love of my life," she said. "She's carrying a brother to American Pharoah. I'm keeping her foal this year, a Tapit filly, and I can hardly wait to see what she can do. The mare is the kindest and most wonderful mare anyone could ever hope to deal with.

"People have given a lot of credit to Pioneerof The Nile for American Pharoah's disposition, and it's my understanding that he is a superb horse as far is that goes, but I have to say that mare could have done it on her own - she's just the sweetest mare in the world."

Three high-class talents who had been purchased for paltry sums in their previous trips through the ring went from rags to riches on Tuesday.

Irish Rookie, bought by Ladyswood Stud and Dermot Farrington for €16,000 as a yearling at Goffs, notched a Listed win and a Classic placing when second in last year's Poule d'Essai des Pouliches for owner and trainer Martyn Meade.

The daughter of Azamour was sold to Andreas Putsch of Haras de Saint-Pair in Normandy for 935,000gns, frustrating the efforts of Julian Dollar and Japanese interests to secure her.

Jack Naylor, a €10,500 Tattersalls Ireland yearling who went on to notch two Group 3 victories and finish second in the Irish Oaks, was sold to James Wigan for 800,000gns, Putsch this time coming off second best.

"She's from a lovely Juddmonte family, " said Wigan, who was acting on behalf of an undisclosed client. "She's a Classic-placed filly, a very good, tough racemare and a good individual."

Jack Naylor is by Champs Elysees out of Listed winner Fashionable, from the family of Juddmonte-bred stars Byword, Continent and Zambezi Sun.

Euro Charline who, almost unbelievably considering her later exploits, was once knocked down for the minimum bid of 800gns as a yearling at Tattersalls, has a date with Japanese kingpin sire Deep Impact on the cards after selling to Shunsuke Yoshida, brother of Northern Farms' Katsumi, for 750,000gns.

"She will be brought back to Japan," he said. "One of our own racehorses raced against her [Real Steel], so we've known her for a long time.

"There are almost too many Deep Impacts in Japan, so it is nice to buy into a new bloodline. She will likely to be bred to him first if he's not too busy!

"We have been busy at other sales - Keeneland and Fasig-Tipton, and we were represented at Goffs."

A daughter of Myboycharlie, Euro Charline was trained by Marco Botti to win four races, including the Beverly D Stakes at the highest level, as well as finish second in the Dubai Turf and Lockinge Stakes this year.

Another lot to achieve a dramatic turnaround in valuation was Screen Star, a daughter of Tobougg who was an 11-length maiden winner for Mark Johnston in 2007 and was later transferred to Godolphin, for whom she never ran.

Johnston bought her for 52,000gns at Tattersalls in 2013, two years before he saddled her daughter Lumiere to win the Cheveley Park Stakes.

The handler cashed in on his shrewd judgement on Tuesday when selling her, in foal to Golden Horn, to Ballylinch Stud for 675,000gns.

"We have sires who would suit her," said Ballylinch Stud supremo John O'Connor. "She has already bred a top-class filly by Shamardal in Lumiere and we have a good son of his in Lope De Vega.

"But we'll get to know her before deciding who to send her to. We have some nice young stallions.

"A dam of a Group 1 winner is rare, and she has a great physique, strength and movement. Lumiere was a really good filly. "

O'Connor also went to 825,000gns for Chartreuse, a daughter of Ballylinch stallion Lawman who was trained in France by Freddy Head for Highclere Thoroughbred Racing and was a Listed winner and Group 3-placed.

The three-year-old hails from a fine family cultivated by the late Gerry Oldham, as a daughter of Group 3-placed Bufera, a half-sister to Group winners Albisola and Johnny Barnes and to the dam of Group 1 winners Ectot and Most Improved.

Henri Bozo of Ecurie des Monceaux, which part-owns Ectot and Most Improved's dam Tonnara, tried hard for Chartreuse but had to give best to O'Connor, who said: "We'll take her home to Ballylinch and decide at a later date which stallion to send her to.

"Obviously she's by a stallion we know well. Lawman had a good horse this year out of a Giant's Causeway mare [Dicton]. Lope De Vega is obviously from that line so that might be the route we take.

"I saw her run at Deauville and was impressed with her then. It's a family we didn't have any of but it's a very good, old line of Gerry Oldham's that we've been watching. There are plenty of young nice mares producing in the family, lots going on."

The clearance rate showed an improvement, though, to 78 per cent from 71 per cent.