Sale-topper is trained by Aidan O'Brien for Zayat Stables

Old Glory - a son of Frankel who topped last year's Goffs Orby Yearling Sale at €1.6 million - got his career off to the perfect start by winning a 7f maiden at Naas on debut on Wednesday.

The Aidan O'Brien-trained colt is the first runner in Ireland to carry the colours of Zayat Stables, made famous by Triple Crown hero American Pharoah, who own the horse in partnership with Coolmore.

It took a while for Old Glory to pass long-time leader Erich Bloch, a Ger Lyons-trained Dandy Man gelding who already had two runs under his belt, but jockey Donnacha O'Brien pushed him out hands and heels to win by a cosy one and a half lengths.

Bookmakers responded to the win by introducing the valuable colt to their Classic markets, with bet365 introducing him at 20-1 for the Qipco 2,000 Guineas, with Boylesports even more impressed, going 16-1. He is also as short as 25-1 for the Investec Derby with Sky Bet.

Aidan O'Brien said after the race: "I'm delighted with that, he should come forward plenty.

"We might look at the Killavullan Stakes over seven furlongs at Leopardstown for him, but he'll stay much further in time."

Old Glory had been signed for at Goffs by US agent Justin Casse, accompanied by Justin Zayat, when he formed part of the draft from his breeder Eddie Irwin's Marlhill House Stud last September.

"We came here looking for horses with stallion potential," said Casse at the time. "Justin Zayat liked him and Aidan [O'Brien] liked him, and the parties involved know all about making stallions. Plus, he's out of a young stakes-producing mare."

Justin Zayat added: "He's an unbelievable physical and as soon as I saw him I said 'wow - I can't leave here without him'. I'm looking for a rock star that can start our global expansion!" 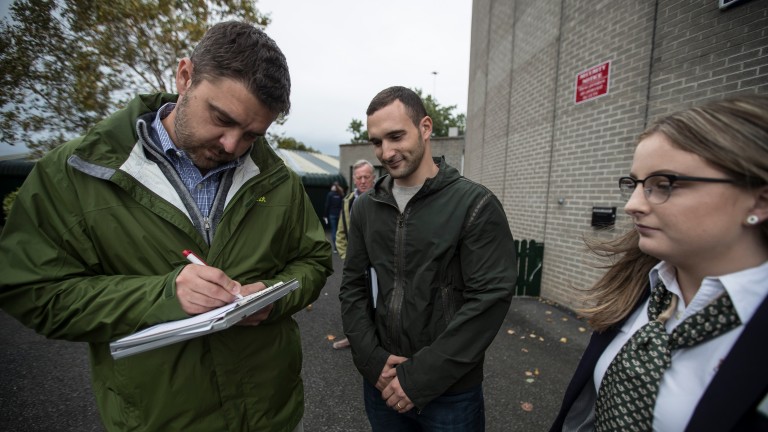 Justin Zayat (centre) looks on as agent Justin Casse signs the ?1.6 million ticket
Patrick McCann
Old Glory is the fifth foal out of the winning Xaar mare Belesta, who is herself out of the Prix de Royaumont winner Bellarida, whose family have enjoyed notable success this year. Her granddaughter With You took the Prix Rothschild last month and her great granddaughter Teppal claimed the Poule d'Essai des Pouliches in May.

Belesta is also a half-sister to Group 3 winner - and dam of Prix de l'Opera heroine We Are - In Clover.

Old Glory is a close relation to Norwegian Group 3 winner Giuseppe Piazzi, a son of Galileo who landed the Oslo Cup and the Scandinavian Open Championship, and is a half-brother to Adjusted, a son of Montjeu who won the Group 2 Herbert Power Stakes in Australia.

Since producing Old Glory the dam has had a colt, now a yearling, by Starspangledbanner.

O'Brien already has a fruitful association with the progeny of Frankel, notably with Group 2 Futurity Stakes winner Rostropovich - who also landed a Group 3 at the Curragh on Saturday - and dual Group 3 winner Nelson.

Zayat Stables have also enjoyed success with Frankel's offspring, as the operation owns the stakes-winning Gidu, a €410,000 purchase from the 2016 Arqana August Sale who also finished a close sixth in this year's Commonwealth Cup.

FIRST PUBLISHED 9:08PM, SEP 19 2018
I'm looking for a rock star that can start our global expansion!