Winning point-to-pointer was bought by Mags O'Toole for £305,000 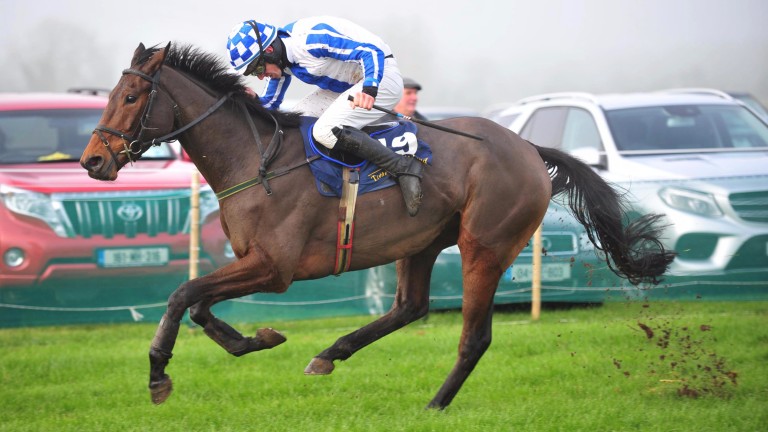 Cool Getaway on his way to winning a point-to-point at Tattersalls in November
Healy Racing
1 of 1
By Lydia Symonds 9:58PM, DEC 9 2016

Cool Getaway, an impressive Irish point-to-point winner, was the top lot at the Tattersalls Ireland Cheltenham December Sale on Friday after Mags O'Toole went to £305,000 to secure the four-year-old.

That sum was the most paid for any lot at the sale since Tattersalls Ireland took over from Brightwells in November of last year.

The son of Getaway, bought from the Newlands Farm draft, is out of Coolnacarriga, a winning half sister to the Listed-winner and useful stayer Shutthefrontdoor.

The horse that chased him home in the point-to-point at Tattersalls Farm last month, was King Of Kilmeague, who also went through the ring on Friday evening, and was the fourth top lot on Friday evening after he was snapped up by Kieran McManus for £150,000.

The son of King's Theatre, whose second dam is the Listed-winner Double Symphony, is owned by the Irish-based Alan Harte, who was quick to express his delight at coming away with a good result on Friday.

"I bought him as a yearling at the Tattersalls Ireland November NH Sale for €45,000 and he was then unsold at the Derby sale so I decided to race him myself," Harte said. "He's a really good horse and he shows plenty at home, so I'm very happy with that. I'm beginning to think this is a very lucky sale for me."

His trainer Denis Murphy shared Harte's excitement at the result and added: "The horse that beat him was the top lot so I was confident. He ran very keen for the first mile and half in the point-to-point, but I think he could be a very smart horse."

There was a sense of the unknown when five French-trained horses were offered on Friday evening, the most at any Cheltenham horses in training sale.

The most expensive of these was Poker Play, who went for £280,000 after being bought by Hubert Barbe who was working on behalf of trainer David Pipe.

A son of Martaline, Poker Play was last seen impressively winning a Class 1 Hurdle at Enghien-Soisy in November, having finished second on debut at the same track earlier that month.

Guillaume Vitse, racing manager for owner Guy Pariente said: "We came over here because we had many offers from agents in France after he won and the race happened after the November sales so we decided to bring him here."

David Pipe, who will train the three-year-old for an existing client, added: "I was very impressed when I watched the replays of the race, especially since the form has been franked by the horse that finished third at Auteuil. He looks like he could be a smashing future chaser. We'll take him home and then go from there."

Anthony Bromley snapped up another French-trained gelding, after he went to £140,000 to secure Polidam, a Grade 1-placed son of Trempolino.

The consistent seven-year-old has raced 21 times for trainer Arnaud Chaille-Chaille with a record that stands at five wins and nine placings.

Bromley, who does not yet have a trainer for the horse, is confident that three miles will bring out the best in him.

"He'll head to Ireland to compete in long distances chases, but I don't know who will train him yet. I think he is crying out for three miles and it is just not a division they have in France except in the Grade 1s," he said.

"He's a horse I've known for a long time and he has some good form and only finished two lengths behind Milord Thomas, who is one of the top jumpers over there. I should think three miles will bring out the best in him."

Pipe also secured Max Do Brazil, a dual-winning hurdler by Blue Bresil who was consigned by Chaille-Chaille for £160,000.

O'Toole and Murphy active throughout the session

O'Toole, working on behalf of trainer Gordon Elliot, was again active late on during the session when she paid £125,000 for a dual-winning French winning son of Kingsalsa, Dis Donc.

She also went home with Coeur De Beauchene after purchasing the Ballynoe Stable-consigned four-year-old for £115,000.

Aiden Murphy also made his presence felt when he bought Robbin'hannon for £110,000 from trainer James King's Dairy Stables draft.

The son of Robin Des Champs, a three length winner of a Dromahane point-to-point, hails from the family of the Grade 2-winning mare Westerner Lady.

"He's going into training with Philip Hobbs. I was very impressed with his point-to-point win," Murphy said. "He's by a top-class sire and out of a presenting mare, which I love."

Of 24 breezers offered, Cap St Vincent, a son of Muthathir, fetched £105,000, the highest priced breeze-up of the evening, after being knocked down to Tom Malone and now looks set to trained by champion trainer Paul Nicholls.

"I was the under bidder at the Derby Sale and I liked him then. He's come back and looks like he's strengthened up. I didn't think I'd have to pay that for him but I like him a lot."

At the end of the sale Richard Pugh, director of horses in training sales at Tattersalls Ireland, said: "Demand for horses on Friday at Cheltenham was phenomenal.

"To sell a record price for a point-to-point horse at this venue of £305,000 topped off a staggering number of horses making £100,000 or more has truly capped off a wonderful year at Tattersalls Ireland Cheltenham Sales.

"In total, 33 horses sold for £100,000 or more at Cheltenham in 2016 which emphatically cements its reputation as venue of choice for quality for horses."