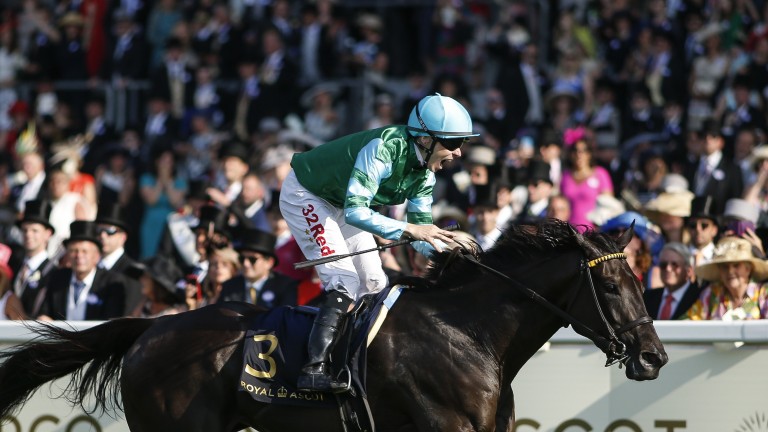 Con Te Partiro landed the Sandringham at Royal Ascot in 2017
Alan Crowhurst
1 of 1
By Meredith Daugherty of BloodHorse UPDATED 10:58AM, NOV 11 2020

After failing to attain her reserve on a final bid of $1.9 million during Monday's opening session of the Keeneland November Breeding Stock Sale, the six-year-old Scat Daddy mare Con Te Partiro has been purchased privately by Sheikh Fahad's Qatar Racing for $1.6 million.

"She's definitely coming back to Tweenhills Stud in England for Qatar Racing," said David Redvers, who signed the ticket on behalf of Sheikh Fahad.

"At the moment, the (stallion) options will be either Kameko, Zoustar, or possibly Frankel or Dubawi. There is a debate going on with Sheikh Fahad and his team. We're just sort of looking around and seeing what it best. We've made no final decision."

Bred in Kentucky by K.C. Garrett Farm out of the Street Cry mare Temple Street, Con Te Partiro was a $130,000 purchase by Cromwell Bloodstock from Taylor Made Sales Agency's consignment to the 2015 Keeneland September Yearling Sale.

She began her career for Hat Creek Racing in the barn of Wesley Ward, and demonstrated an affinity for the grass early when she won the Bolton Landing Stakes and finished second in the Juvenile Turf Sprint Stakes in the United States at two.

Sent to the Royal Ascot meet in 2017, Con Te Partiro scored in the Sandringham Handicap. She went through the ring at the 2018 Fasig-Tipton Kentucky Fall Mixed Sale, where she was purchased for SF Bloodstock and Newgate Farm for $575,000 when consigned by Ashview Farm.

Sent to Australia at the start of 2019, the mare won the Arrowfield Dark Jewel Classic at Scone on her first outing for her new connections.

The year 2020 proved to be an exceptionally lucrative season for Con Te Partiro. The mare won the March 14 Coolmore Classic at Rosehill and the April 11 Coolmore Legacy Stakes at Randwick. She was retired in the autumn and holds a 6-1-2 record from 25 starts, with earnings of $828,719.

FIRST PUBLISHED 10:53AM, NOV 11 2020
At the moment, the (stallion) options will be either Kameko, Zoustar, or possibly Frankel or Dubawi