Come rain or shine, the great and good descend on the Saratoga sale 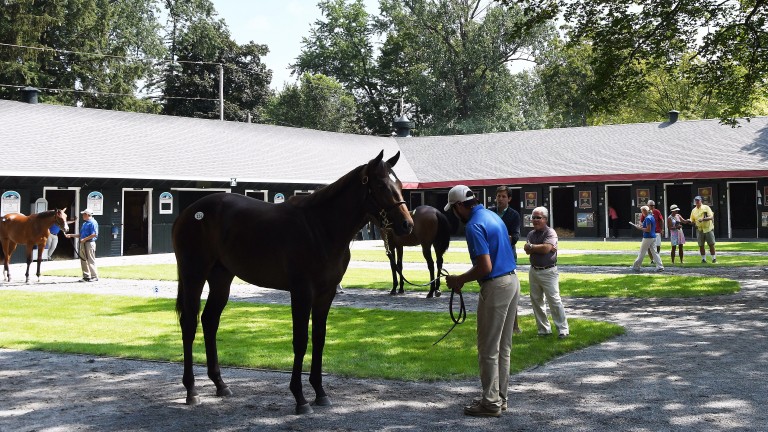 A colt by Into Mischief is inspected on the Saratoga sales ground
Fasig-Tipton Photos
1 of 1
4:05PM, AUG 6 2017

With potential buyers from Europe, Japan and Australia joining Americans inspecting horses, Fasig-Tipton officials and consignors provided a generally sunny forecast for the Saratoga Selected Yearlings sale despite occasional rain from summer showers in the area.

"We have a nice group of horses on the grounds and a really nice group of buyers here," said Fasig-Tipton chief executive Boyd Browning Jr. "The feedback we've been getting is that the horses are of the highest quality, so we have every reason to be optimistic."

Two days prior to the fall of the first hammer for the boutique auction set for August 7 and 8 at the Humphrey S. Finney Pavilion in Saratoga Springs, an almost audible upbeat vibe hummed throughout the sale's barn area.

"It's a little early to make predictions, but the way the stock markets have been doing and with the economy up, it all helps. The indications have been most clear - there is money for what are perceived to be the best horses," said Craig Bandoroff of Denali Stud, which two years ago consigned the Tapit colt that sold for $1.2 million and would go on to become this year's Belmont Stakes winner Tapwrit.

"We're in a good market for good horses," he observed.

This year, Denali will present Tapwrit's half-brother, by Speightstown and out of Grade 1 winner Appealing Zophie, by Successful Appeal. Both Tapwrit and the yearling colt were bred by the My Meadowview Farm of Barnes and Noble bookstore chain founder and chairman Leonard Riggio.

Catalogued as lot 124, the colt is a different physical type to Tapwrit, Bandoroff said, since he is made in the mold of his champion sprinter sire with a compact frame. 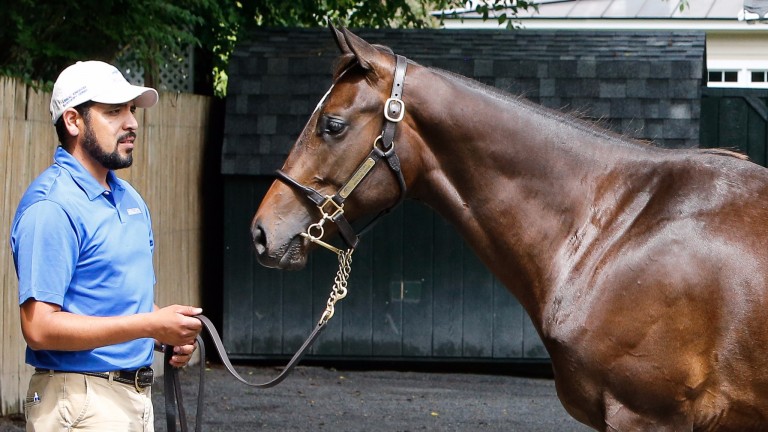 Lot 124: the Speightstown half-brother to Belmont Stakes winner Tapwrit
Michele MacDonald
Of the 227 horses originally catalogued for this year's sale, 27 have been withdrawn to date, with most of those owned by breeders. 52 of the yearlings that remain in the sale, around 26 per cent, are pinhooks and were reported sold at previous auctions, including a War Front half-sister to European champion Peeping Fawn and to Group 1 winner and sire Thewayyouare.

Bred by the Coolmore entity Barnett Enterprises, the filly was listed as sold for $650,000 at last year’s Keeneland November sale to Newgate Farm of Australia and its partner SF Bloodstock. She is consigned to the Saratoga sale by Dromoland Farm, as agent.

This year's catalogue features a variety of sires as well as individuals that could appeal to buyers from around the world.

Sires are led by Uncle Mo, who has 16 yearlings in the catalogue, while a dozen from the final crop of the late Scat Daddy are included. Leading American sire Tapit is represented by ten yearlings along with freshman sire Orb and Will Take Charge, whose oldest offspring are yearlings.

Some of the yearlings that have international allure include a War Front filly out of Grade 3 winner Starstruck, by Galileo (65); an Animal Kingdom colt out of a daughter of Poule d’Essai des Pouliches winner Musical Chimes (66); a Medaglia D’Oro colt out of multiple British stakes winner Anne Of Kiev (122), by Oasis Dream; a Street Sense half-sister to Group 1 Prix Jean-Luc Lagardere runner-up Cymric (182); a Declaration Of War colt out of Grade 1 winner Harmony Lodge (201), and a Scat Daddy colt out of French stakes winner Kaloura, a half-sister to European and US champion Kalanisi (216).

Trainer Chris Waller, who conditions superstar mare Winx, has joined several others from Australia drawn to Saratoga by the potential of this year's yearlings, said Max Hodge, Fasig-Tipton vice president of client services.

In 2016, Australian-based Jadeskye Racing and trainer Michael Freedman made purchases at this sale, with the former paying $285,000 for a Scat Daddy filly who was later resold at the Fasig-Tipton Florida select two-year-olds in training sale for $800,000 to Kerri Radcliffe on behalf of Phoenix Thoroughbreds.

Named Take Me With You, that filly finished third in the Albany Stakes at Royal Ascot for Phoenix Thoroughbreds and trainer Jeremy Noseda.

Browning said Radcliffe has come to Saratoga as a potential new buyer at the venue. Godolphin's European-based bloodstock manager Jono Mills and his team also have been looking at yearlings with other Europeans including agent Hugo Merry. 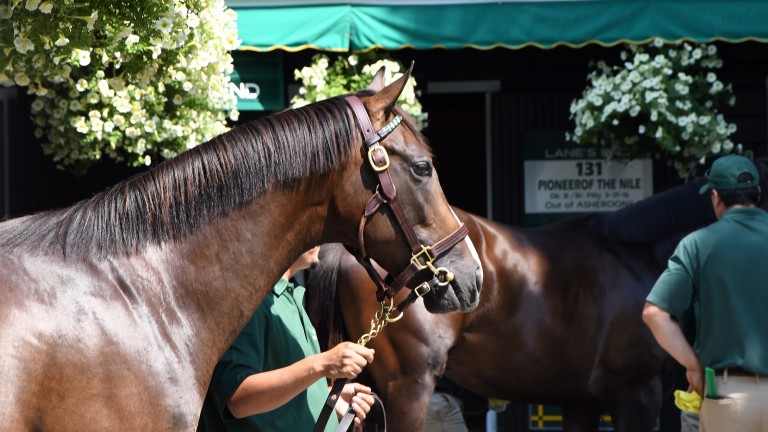 A yearling is paraded during the Fasig-Tipton Saratoga Sale
Fasig-Tipton Photos
"You're going to get more of an international buying base than you have in the past. Whether they'll buy or not, remains to be seen," said Four Star Sales' Tony Lacy, who said Saratoga's unique environment, with the historic racetrack just across the street and a lively local nightlife, makes the sale one of the world's most colorful.

China Horse Club will return as a seller this year, consigning a Tapit filly out of Empire Maker's Grade 1-winning daughter Last Full Measure, through Bluewater Sales (222). The filly's half-sister by War Front, later named End Times, was sold for $600,000 to Cromwell Bloodstock Agency at the 2016 Keeneland September yearling sale after China Horse Club paid $1.5m for Last Full Measure while she was carrying that filly in utero.

FIRST PUBLISHED 4:05PM, AUG 6 2017
The feedback we've been getting is that the horses are of the highest quality, so we have every reason to be optimistic