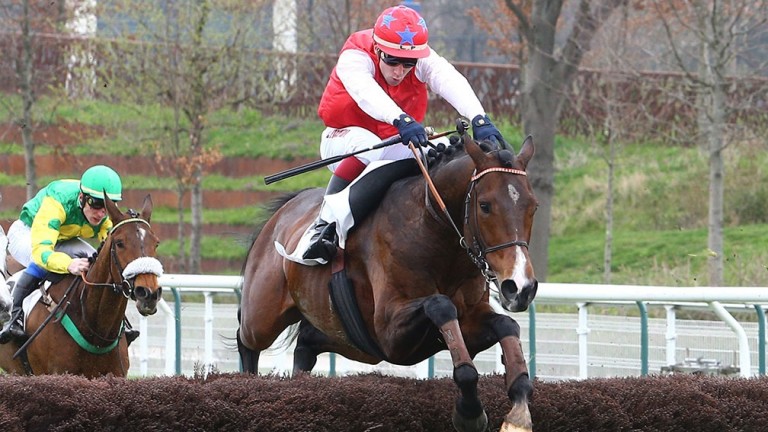 The past week has served to remind what a loss King's Theatre, who succumbed to colic at Ballylinch Stud aged 20 in 2011, was to jumps breeders.

They join a long list of top-notch performers by King's Theatre this season that is headed by Cue Card and includes Bellshill, Blood Crazed Tiger, Peregrine Run and Royal Regatta.

He was also the damsire of Saturday's Grade 2 Albert Bartlett Novices' Hurdle winner Wholestone, a close relation to Cheltenham Gold Cup winner Bob's Worth, who is also out of a daughter of King's Theatre.

As with any jumps sire, King's Theatre has few high-achieving sons left entire to continue his line. But luckily the French jumps industry is less quick to geld its runners and Yorton Farm near Welshpool has managed to secure a stallion son of the best source of hurdlers and chasers in recent years from across the Channel.

Clovis Du Berlais will start his second career at Yorton Farm next year at a fee of £2,250 alongside Blue Bresil, Gentlewave, Norse Dancer, Pether's Moon, Sulamani and Universal.

It is not the first time that Yorton Farm has stood a son of King’s Theatre, having offered Great Pretender for one season in 2014.

When it came to securing a new recruit for 2017, standing another son was something that appealed to stud manager David Futter.

“He was too old to be moving again so I thought the next best thing we could try to do was to recruit another son of King’s Theatre. We’d been following Clovis Du Berlais for a while. [Bloodstock agent] Richard Venn said he could be bought and I didn’t need any persuasion. I jumped on the plane straight away to go and see him.”

The five-year-old is out of the Kahyasi mare Kenza Du Berlais and is a half-brother to Paddy Power Gold Cup hero Caid Du Berlais.

Trained by Robert Collet, he won over both hurdles and fences as well as finishing second to Bonito Du Berlais in last year’s Grade 2 Prix Amadou.

Futter added: “King’s Theatre is a proven sire of jumpers and has shown that he is a sire of sires with Great Pretender. He gets you good stock too.

“Clovis is a very good-looking horse and a great performer who has everything going for him to be successful. He ticks a lot of boxes as a sire.

“Now we’ve got the only other son of King’s Theatre at stud and hopefully that’ll be an angle that British breeders take advantage of. There are already French breeders with mares booked into him and Irish mares too.”

The operation hosts its Christmas Bloodstock Parade on Tuesday, which will feature Clovis Du Berlais and the six other stallions on the roster as well as promoting some of the young stock ready to go into training.

Potential customers visiting will know that Clovis Du Berlais has the credentials on paper to make a successful sire, now they will be able to judge whether his physique stands up to inspection.

FIRST PUBLISHED 8:00PM, DEC 12 2016
King’s Theatre is a proven sire of jumpers and has shown that he is a sire of sires with Great Pretender