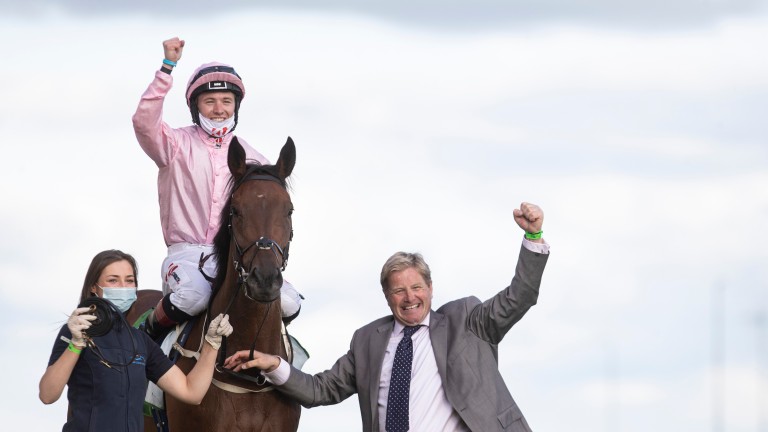 Even So: the fourth Classic winner descended from Rose Of Jericho
Patrick McCann
1 of 1
By Martin Stevens UPDATED 8:53PM, JUL 18 2020

Just over a month after Siskin delivered trainer Ger Lyons and jockey Colin Keane a significant breakthrough in the Irish 2,000 Guineas, Even So became their second Classic winner with a smooth victory in the Juddmonte Irish Oaks on Saturday.

The Camelot filly's other connections are far more accustomed to Classic success, though.

The Irish Oaks is the sixth of the eight Classics run in Britain and Ireland so far this year to have fallen to a winner carrying the various Coolmore silks, after the 1,000 Guineas and Oaks (won by Love), Derby (Serpentine), Irish 1,000 Guineas (Peaceful) and Irish Derby (Santiago).

Indeed, Even So completes the Irish Derby/Irish Oaks double for her breeders, the Shanahan family's Lynch Bages operation, who also co-own the filly with Susan Magnier.

She is the tenth foal out of the winning Danehill mare Breeze Hill, who was bred in Ireland but was based in Australasia for her paddocks career from 2004 until 2014, when she was imported to Ireland.

The dam has produced seven winners in total but Even So, who struck in the Listed Naas Oaks Trial on her last start, is her first to collect black type of any kind.

Breeze Hill, now aged 20, has an outstanding pedigree. Not only is she by the breed-shaping Danehill, but she was also the final foal of Robert Sangster's blue hen mare Rose Of Jericho, thus making her a half-sister to four stakes winners headed by Derby hero Dr Devious and Greenlands Stakes scorer Archway.

Even So is therefore the fourth British or Irish Classic winner to be descended from her granddam Rose Of Jericho, an unraced Alleged three-parts sister to Racing Post Trophy third Zind who is buried at Coolmore alongside Doff The Derby, the dam of Epsom Classic winners Generous and Imagine.

Camelot, who is keeping the flame alive for the Montjeu sire-line in Flat breeding, stands at Coolmore at a fee of €40,000.

His Coolmore colleague Australia was denied the first top-level winner of his stud career with Cayenne Pepper finishing two lengths in second behind Even So in the Irish Oaks.

Australia's sire Galileo, the king of Coolmore, fielded the fillies who finished third, fourth and fifth – Passion, Laburnum and Snow, each of them a sister to a Classic winner in Capri, Roderic O'Connor and Kew Gardens respectively.

'It's massively positive' – industry figures get behind Tattersalls' newest sale