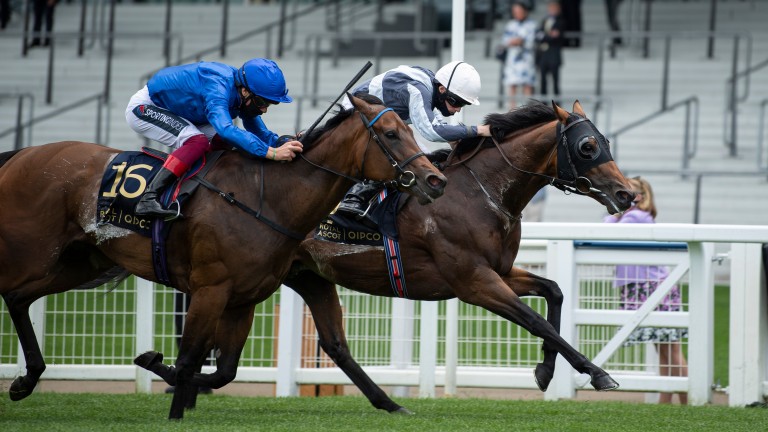 Circus Maximus emulated his late dam Duntle by becoming a dual Royal Ascot winner with a fine front-running victory in the Queen Anne Stakes on Tuesday.

The son of Galileo, successful in the St James's Palace Stakes last year, was sent to the head of affairs early in the race by jockey Ryan Moore as the field stacked up behind him.

Many of the Aidan O'Brien-trained colt's rivals seemed to be going well in behind but he kept finding more and had a head in hand of the fast-finishing runner-up Terebellum – a filly by Galileo's half-brother Sea The Stars – on the line.

Circus Maximus is sadly the first and only foal out of Duntle, who succumbed to laminitis in 2017 not long after giving birth to her second foal, who died in the delivery.

Duntle, a daughter of Danehill Dancer from the family of Woodford Reserve Turf Classic winner Honor In War, was bred by Airlie Stud.

After carrying the silks of that operation's Sonia Rogers to an 18-length victory in a Dundalk maiden she was sold to the Niarchos family in a private deal, and went on to win the Sandringham Handicap and Desmond Stakes at three.

She was also first past the post in the Matron Stakes that season but was demoted to second in favour of Chachamaidee in controversial circumstances, having been deemed to have caused interference by the Leopardstown stewards.

Duntle won the Amethyst Stakes on her debut at four before collecting her second Royal Ascot success in the Duke of Cambridge Stakes. She went on to finish second in the Prix Rothschild and third in the Sun Chariot Stakes.

He is bred on the heavily mined cross of Galileo over mares by his former Coolmore studmate and fellow British and Irish champion sire Danehill Dancer.

Such matings have produced 63 winners from 84 runners, including 16 Group winners. Other notable exponents of the cross are Alice Springs, Minding, Sovereign, The Gurkha and Tuesday's Ribblesdale Stakes runner-up Ennistymon.

Circus Maximus is jointly owned by Coolmore and the Niarchos family, so his future presumably lies in the Coolmore stallion ranks.

His instinctive will to win, so typical of progeny of Galileo, paired with his outstanding distaff family should ensure him plenty of custom.

FIRST PUBLISHED 3:10PM, JUN 16 2020
Circus Maximus is jointly owned by Coolmore and the Niarchos family, so his future likely lies in the Coolmore stallion ranks