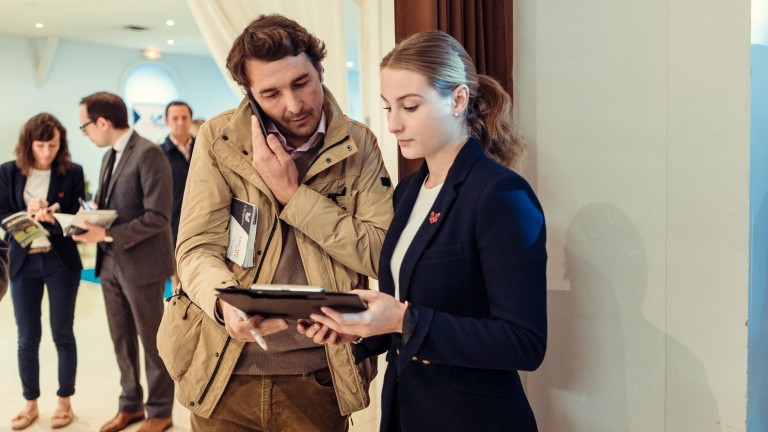 Saturday night at Saint-Cloud may not have reached the heady heights of 12 months earlier, but there was still no shortage of action between the first hammer fall and the last as 17 lots fetched six figures, topped by recent Group 3 runner-up Insandi knocked down to Nicholas de Watrigant's Mandore International for €470,000.

Speaking after the sale, De Watrigant said: "He's been bought for Sunderland Holdings – the Tsui family, Mrs Tsui and Christopher, plus two other families and friends of the family. He'll go to William Haggas."

Insandi is not the first horse sent by the Tsuis to Haggas – the Newmarket trainer is responsible for their Prix de l'Arc de Triomphe hope Sea Of Class, second favourite for Sunday's race behind Enable.

"His form is excellent," added De Watrigant of the new acquisition. "He's a beautiful horse, very good-looking and we think he's got a lot of scope to make a nice three-year-old, he has lots of potential."

Trained by Carlos Lafffon-Parias, the juvenile colt by Anodin went to auction the winner of one from three starts, and offering a page including Listed-winning half-brother Courcy and further back, Hardwicke Stakes winner Charlie Bubbles.

Insandi's dam Insan Mala, by Bahhare, topped her racing career with a fourth place in the Grade 1 Garden City Breeders' Cup Handicap at Belmont and a third in the Grade 3 Edgewood Stakes.

The six-figure barrier was broken early on as Michel Zerolo's Oceanic Bloodstock went to €390,000 for Listed winner Lily's Candle, the third lot in the ring, quickly following up at €400,000 for lot 18, Night Of England.

The latter, a daughter of leading German sire Lord Of England, hails from the family of popular but quirky sprinter Pakistan Star.

Lagrandecatherine, also entered in the Marcel Boussac, failed to find a new owner when led out unsold at €440,000.

Both Lily's Candle and Night Of England will now carry the colours of owner Martin Schwartz, who has hit the big time with other fillies and mares sourced in France - think Stacelita, Zagora and Elusive Wave.

Prix Dollar winner off to Qatar

Champion Qatari trainer Jassim Ghazali will take receipt of the Wertheimer brothers' homebred Alignement, who came with a very recent catalogue update and was bought by Gerard Larrieu of Chantilly Bloodstock for €310,000.

"He just won today [in the Group 2 Prix Dollar], so they're excited about him," said Larrieu. "Racing is going well out in Qatar, horses are in demand over here and I'm buying more for Jassim – he also comes over to Tattersalls."

Alignement, a five-year-old gelding by Pivotal, is the winner of eight races from 21 starts, also placing on five occasions.

A pair of fillies left the ring having sold at €300,000. The first, three-year-old Tresorerie, was sold to dissolve a partnership and bought by Nexus Consulting on behalf of L'Ecurie Vivaldi, previous co-owners.

A dual winner for Christophe Ferland, she was last seen when beaten a short head in a Listed race at Toulouse on Wednesday. Bred by Haras du Quesnay, she is out of the Listed-winning and Group-placed Treasure, a daughter of Anabaa.

BBA Ireland also went to €300,000 on behalf of Yulong Investments for Happy Odyssey, a Listed-winning daughter of Camacho trained by Amy Murphy. The juvenile hails from the family of smart performer Tupi and South African Grade 1 winner Bela-Bela.

Anthony Stroud, fresh from the Goffs Orby sale where he secured a €500,000 Camelot filly for Godolphin, parted with €250,000 for Listed winner Spotify, a colt from the first northern hemisphere crop of Australian supersire Redoute's Choice.

"He's for an existing client and will eventually be aimed at the Dubai Carnival," said Stroud. "He has a good rating and fits the profile for horses who do well out there - plus we've had a lot of luck buying from the Wertheimers in the past."

Despite six lots fetching €300,000 or more, figures for the evening were significantly down on 2017, when Melbourne Cup hopeful Poetic Dream sold for €900,000.

Selling returns to Arqana on October 23 for the October Yearling Sale.

FIRST PUBLISHED 10:07PM, OCT 6 2018
He's a beautiful horse, very good-looking and we think he's got a lot of scope to make a nice three-year-old, he has lots of potential