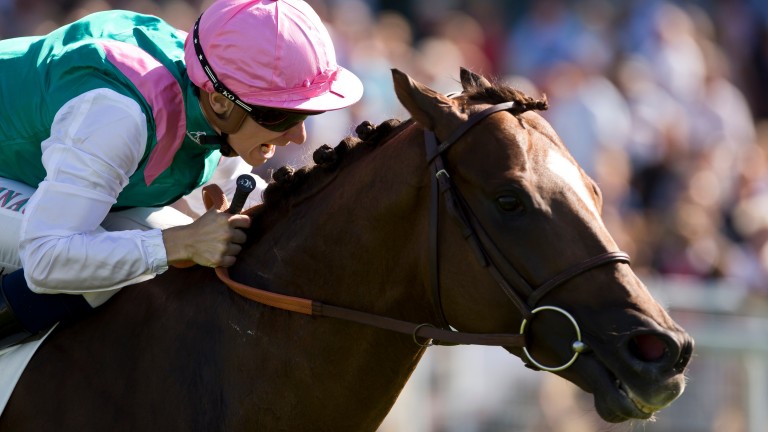 New Bay: son of Dubawi will stand alongside the horse who beat him in the Prix du Jockey Club, Make Believe
Patrick McCann
1 of 1
By James Thomas 10:32PM, NOV 19 2016

Ballylinch Stud has added Classic winner New Bay to its stallion ranks for 2017, with the recruit given an introductory fee of €20,000.

The County Kilkenny operation will purchase a majority stake in the son of Dubawi, with owner-breeder Juddmonte Farms remaining a significant partner and the China Horse Club coming on board to take a "sizeable interest" in him.

Remaining shares will be syndicated among breeders, with existing shareholders in Ballylinch stallions receiving the first option to purchase them.

New Bay ran 11 times for Andre Fabre, winning on five occasions. He opened his account on his first outing at three, a victory that was followed by a fast-finishing second to future Ballylinch studmate Make Believe in last year's Poule d'Essai des Poulains.

His finest hour came when upped in distance for the Prix du Jockey Club, in which he beat subsequent Group and Grade 1 winner Highland Reel by one and a half lengths.

During his three-year-old campaign New Bay also registered wins in the Prix Guillaume d'Ornano and Prix Niel, and finished a close third to Golden Horn in the Arc. He also won this year's renewal of the Group 3 Prix Gontaut-Biron in a virus-affected season.

New Bay is out of the Listed-winning Zamindar mare Cinnamon Bay, making him a half-brother to three winners. He hails from the outstanding Juddmonte family of Oasis Dream, Kingman and Beat Hollow.

Ballylinch Stud managing director John O'Connor said: "A classic winner by Dubawi, from the family of Oasis Dream and Kingman and an exceptional looker - he ticks all the right boxes for me."

The acquisition follows hot on the heels of the announcement that Flintshire, another Juddmonte homebred, is to take up stallion duties at Hill ‘n' Dale Farm in Kentucky, also in partnership with the China Horse Club.

New Bay is the second addition to the Ballylinch roster for 2017 after dual Group 1 hero Fascinating Rock.

FIRST PUBLISHED 10:31PM, NOV 19 2016
A Classic winner by Dubawi, from the family of Oasis Dream and Kingman and an exceptional looker - he ticks all the right boxes for me