Integral, Peeress, Hypnotize and Starscope among those lined up for big covers 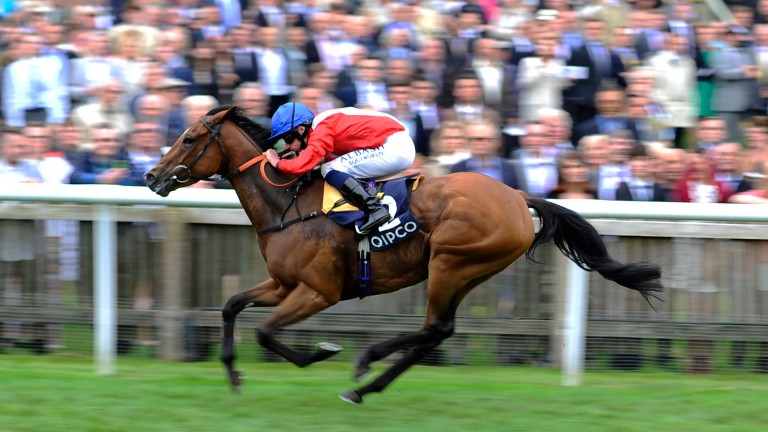 Foaling season is now in full swing, and at the famed nursery of Cheveley Park Stud in Newmarket 26 new arrivals are already on the ground.

But one of the leading lights of the Cheveley broodmare band, Integral, is yet to foal with her first-born, who is by Dubawi, due around March 19. Once the new arrival is on the ground, the Sun Chariot and Falmouth Stakes winner is set for a date with sire sensation Dark Angel.

Another of the big names yet to foal is Peeress, who is due to Exceed And Excel. Her offspring enjoyed a productive year in the sales ring in 2016 with her Frankel colt going the way of MV Magnier, Mayfair Speculators and Peter and Ross Doyle for 1,300,000gns during Book 1 of the Tattersalls October Yearling Sale, a transaction that helped inform her 2017 covering.

“Peeress is going back to Frankel,” said the stud’s managing director Chris Richardson. “Having sold the colt for 1.3 million guineas it made sense to send her back to him. That was probably the easiest mating to decide.”

Among the mares to have already foaled is Hypnotize, a 20-year-old daughter of Machiavellian whose progeny include champion juvenile filly Hooray and Mazyoun, who finished third in last year’s Redcar Two-Year-Old Trophy for Hugo Palmer and Al Shaqab Racing. Her latest foal is a bay filly by the stud’s resident Mayson. Hypnotize returns to Mayson in 2017.

“He’s started extremely well and, as a horse who improved with age, hopefully his stock will do the same,” said Richardson on Mayson’s first crop of two-year-olds.

“We’re pretty positive with him at this point in time. Hooray is by Invincible Spirit and Mayson is a son of Invincible Spirit, so there’s lots of reasons to repeat the mating, and it’s nice and close at home for a mare with a little bit of age on her now.”

Another of the Cheveley Park mares to have been represented by a promising two-year-old last year was Clinical, whose first foal is Acomb and National Stakes third Lockheed. The Group 3-winning daughter of Motivator, who hails from the family of Verglas and last year’s Fillies’ Mile winner Rhododendron, produced a filly by crack miler Kingman on February 22 and is now due to visit the Irish National Stud stalwart Invincible Spirit.

“He’s a proven horse and he’s an exciting stallion to use,” said Richardson on the decision to use Invincible Spirit. “Clinical was very good in her own right and Lockheed looks to have some potential. Hopefully he’ll go on to bigger and better things this year. It’s a lovely family that keeps producing horses who are above average.”

Coronation Stakes and 1,000 Guineas runner-up Starscope, who is out of a half-sister to Medicean, produced her third foal this year with a colt by Dansili arriving on January 31. She is now due to visit one of the most exciting additions to the stallion ranks in recent years, Shadwell’s Muhaarar.

“It will be fascinating to see Muhaarar’s first crop of foals as he was a very good racehorse,” said Richardson. “As we know he beat Twilight Son at Ascot, and we were impressed with him when he won at Royal Ascot. He’s certainly a horse who we’re keen to support.

“We’re quite excited as we have a nice Dansili two-year-old filly out of Starscope in training with Sir Michael Stoute called Lunar Corona. Obviously it’s still early days but she was a nice enough individual to be selected by Sir Michael, which is a massive compliment.”

Provenance, a stakes-placed daughter of Galileo and Group 1 winner Echelon, and therefore a half-sister to Integral, produced her first foal, a “robust” chestnut colt by Dutch Art. She is pencilled in to Lope De Vega later this year.

Another mare with a Group 1-winning relation to produce her first foal in 2017 is Royal Seal, who had a bay colt by Cheveley Park flagbearer Pivotal. The daughter of Dansili is a winning sister to last year’s Breeders’ Cup Filly and Mare Turf winner Queen’s Trust – who remains in training in 2017 – and is now due to visit Lethal Force, who has his first two-year-olds on the track this year.

Between Us, a half-sister to French Oaks winner Confidential Lady from the family of US Triple Crown winner Affirmed, is another to have delivered a foal by Pivotal, with the bay filly being born in the middle of last month. The new arrival weighed in at 53 kilograms.

A winner and Listed-placed, the daughter of Galileo next visits Haras de la Cauviniere resident Le Havre, which means the resulting foal will be bred on the came cross as the unbeaten Poule d’Essai des Pouliches and Prix de Diane winner La Cressonniere.

“We’re lucky as we bought a share in Le Havre a number of years ago and we’re utilising that to full advantage,” said Richardson. “She was obviously a stakes-placed filly herself and we’re hopeful that once again those little branches of the family could take off.”

The Listed-placed Pivotal mare Rock Choir has produced her second foal, a bay colt by Newsells Park resident Nathaniel. Rock Choir is a sister to 2004 Pretty Polly Stakes winner Chorist, a pedigree that makes the new arrival a close relation of dual Group 2 winner Gospel Choir, who is by Nathaniel’s sire Galileo. Rock Choir is due to visit another son of Galileo in 2017 in Intello.

Stakes winner and Group-placed Tigrilla delivered her first foal this year, a bay colt by Pivotal who weighed in at 46 kilograms arriving on January 31. The mare shares her page with Group 1 winners Refuse To Bend and Twilight Agenda and is due to visit Rathbarry Stud stalwart Acclamation, sire of the likes of Equiano and Harbour Watch.

Osipova, a winning daughter of Makfi, has had her first foal, a colt by Cheveley Park resident Dutch Art, which means he is very closely related to last season’s Group 3 Sovereign Stakes winner Zonderland. He hails from the same family as the illustrious Russian Rhythm. Osipova returns to Dutch Art in 2017.

“It made sense to go to Dutch Art on the basis of Zonderland being by Dutch Art. We have a full-brother in training with John Gosden called Whitlock,” said Richardson. “We also have a full-brother yearling who will potentially go to the sales in the autumn. There’s a lot going on there and it’s a phenomenal pedigree.”

FIRST PUBLISHED 8:31PM, MAR 3 2017
We’re lucky as we bought a share in Le Havre a number of years ago and we’re utilising that to full advantage