International END OF AN ERA

Cheveley Park Stud linchpin Kyllachy retired at the age of 19

Kyllachy comes with a late rattle to land the Group 1 Nunthorpe Stakes on his final outing
Martin Lynch
1 of 1
By James Thomas UPDATED 1:54PM, SEP 11 2017

Kyllachy, champion sprinter and a cornerstone of British breeding for so many years, has been retired from covering duties by Cheveley Park Stud after suffering fertility problems. The 19-year-old son of Pivotal has stood at David and Patricia Thompson's operation each season since 2003.

The stud's managing director Chris Richardson said in a statement: "Kyllachy has been a true flagbearer for Cheveley Park Stud over the years, with his stock having been embraced by owners and trainers alike. His record speaks for itself, having produced tough, genuine and competitive horses at every level."

A stallion who became a byword for both toughness and precocity, Kyllachy leaves behind an enviable roll-call of talent, headed by his quite brilliant five-time Group 1-winning son Sole Power, whose push-button acceleration earned him something approaching cult status.

Sole Power, who emulated his sire by landing the Nunthorpe Stakes, is one of three top-flight winners by Kyllachy, along with Dubai Golden Shaheen winner Krypton Factor (Kyllachy's highest-rated progeny with a Racing Post Rating of 123) and dual Group 1 hero Twilight Son, who now stands at Cheveley Park Stud himself.

From 11 full crops on the ground he has sired 390 successful sons and daughters at a winners-to-runners ratio of 55 per cent, 62 of whom became stakes performers, with 16 landing Group races and 14 winning at Listed level. 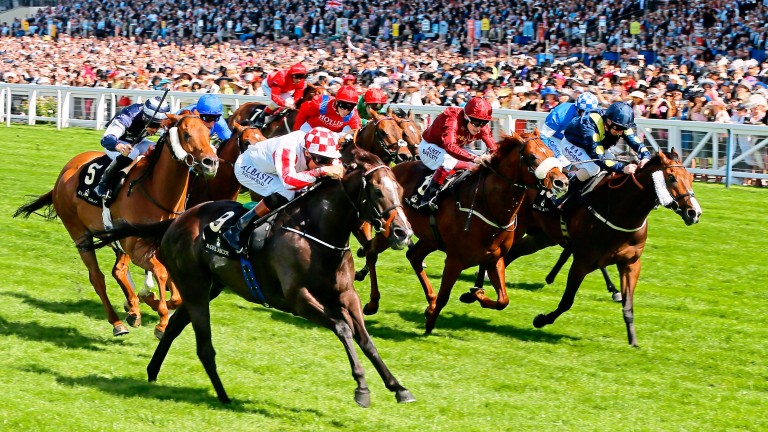 Sole Power (near) sees off another of Kyllachy's sons in Stepper Point (cheekpieces) to give the sire a one-two in the 2014 King's Stand Stakes
Mark Cranham
Bred by Wheelersland Stud – from the Song mare Pretty Poppy – and trained by Henry Candy for Thurloe Thoroughbreds, Kyllachy made a perfect start to his 12-race career when landing a 5f Chepstow maiden on debut at two.

Though he recorded the second of his six victories at three, it was not until his four-year-old campaign that the full extent of Kyllachy's ability was revealed.

His first Group-race success came in the 2002 Palace House Stakes, an effort he followed up with a career best performance (by Racing Post Ratings) in a four-length demolition of the Group 2 Temple Stakes at Sandown. That thrust him into elite company on a mark of 125.

After a luckless defeat in the King's Stand, Kyllachy made amends in no uncertain terms when making his Group 1 breakthrough in one of sprinting's most coveted prizes, the Nunthorpe Stakes.

Anchored in rear by Jamie Spencer, Kyllachy switched to the opposite side of the course from which he was drawn. With two furlongs to run he began to make sustained headway, and under strong urging eventually forged to the front close home to see off Malhub by half a length.

His first Group 1 was to be his last, however, as a minor injury interrupted his preparation for the Prix de l'Abbaye sufficiently for connections to call time on his racing career.

"As a sprinter, he was everything you'd look for, plus a good deal more," Spencer said after Kyllachy's retirement from the racecourse.

"While people will point to his defeat of Malhub at York as his best performance, I think he was marginally better in the Temple Stakes. That day, he felt like a Porsche against a fleet of Minis. It's no exaggeration to say that he destroyed them."

His handler's assertion duly came to pass when, at a fee of £7,500, Kyllachy covered a book of 120 mares in his first season on duty at Cheveley Park in 2003. That first crop yielded 19 domestic two-year-old winners, a tally that saw Kyllachy crowned leading British-based first-season sire in 2006, and included an early flag-bearer in his Jersey and Lennox Stakes-winning son Tariq.

The likes of Arabian Gleam and Penitent soon followed, with the latter in particular embodying so many of the qualities that breeders came to rely on Kyllachy to impart.

Bred by Cheveley Park Stud, Penitent began his racing career at three, and in 53 starts won seven stake races, including a brace of Group 2s, maintaining a high-class level of form right through into his nine-year-old campaign.

In a mirror image of his racing career, even as he entered latter stages of his time at stud, Kyllachy has continued to prove an illustrious source of winners. He posted a personal best of 78 successful sons and daughters across Britain and Ireland during the 2016 campaign, churned out at a winners-to-runners ratio of 45 per cent.

His 2017 two-year-old crop, meanwhile, has also produced one of the stars of the current turf season, with his daughter Heartache looking a top-class filly in the making as she ran out a commanding winner of the Group 2 Queen Mary Stakes at Royal Ascot.

Despite having never stood for more than £15,000, the admiration for Kyllachy's progeny on the racecourse was routinely reflected in his popularity in the sales ring, breeders who utilised his services being rewarded with yearling prices as high as 480,000gns.

Kyllachy's legacy at Cheveley Park looks set to live on through the two newest names on the stud's roster, with the aforementioned Twilight Son, his Haydock Sprint Cup and Diamond Jubilee-winning son, having taken up covering duties in 2017. Garswood meanwhile, whose first crop are this year's yearlings, is out of the Kyllachy mare Penchant. Kyllachy also has Dragon Pulse (Irish National Stud) and Arabian Gleam (Ivy House Stables) flying the flag for him at stud.

FIRST PUBLISHED 2:36PM, SEP 8 2017
That day, he felt like a Porsche against a fleet of Minis. It's no exaggeration to say that he destroyed them