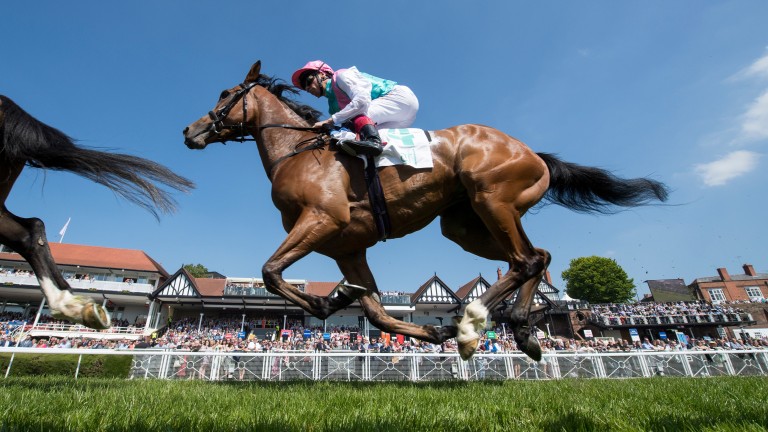 Enable: the Cheshire Oaks winner is descended from Oaks runner-up Bourbon Girl
Edward Whitaker
1 of 1
By Martin Stevens 3:51PM, MAY 10 2017

Sophomore sire Nathaniel was always going to come to prominence as his progeny matured and tackled longer trips, and on Tuesday he was represented by his first stakes winner when daughter Enable readily scored in the Listed Cheshire Oaks at Chester.

The Newsells Park Stud resident – a son of Galileo who broke his maiden at three himself before taking the King George VI and Queen Elizabeth Stakes and Eclipse – is faring well this year, with 11 winners in Europe.

Nathaniel is also the sire of four stakes-placed runners on the continent, while Ronald R won a competitive handicap at Newmarket at the weekend.

Enable – who paid a compliment to her stablemate and fellow Juddmonte homebred Shutter Speed, who she finished two places behind at Newbury on her last run – was saddled by Nathaniel's trainer John Gosden.

As is the case with any horse bred by Juddmonte, Enable has a deep pedigree.

She is out of the Sadler's Wells mare Concentric, a Listed winner in France over 1m2f, making her a half-sister to two winners including Contribution, who finished third in the Prix de Pomone over 1m4f.

Concentric is a sister to Dance Routine, a Group 2 winner over 1m4f and the dam of five-time top-level winner Flintshire, and a half-sister to stakes winners Apsis and Space Quest.

Concentric is out of Apogee, a daughter of Shirley Heights who won the Group 3 Prix du Royaumont over 1m4f, and Apogee was in turn a daughter of Bourbon Girl, an Ile De Bourbon mare who finished second to Unite in both the Epsom and Curragh Oaks in 1987.

Concentric has a two-year-old colt by Dansili named Centroid, a yearling filly by the same sire and was covered by Frankel last year.

An interesting footnote to Enable's pedigree is her close inbreeding to Sadler's Wells. Nathaniel is a paternal grandson and Concentic is a daughter, so the Chester heroine is bred 3x2 to the legendary Coolmore sire.

FIRST PUBLISHED 3:51PM, MAY 10 2017
Apogee was in turn a daughter of Bourbon Girl, who finished second to Unite in both the Epsom and Curragh Oaks in 1987